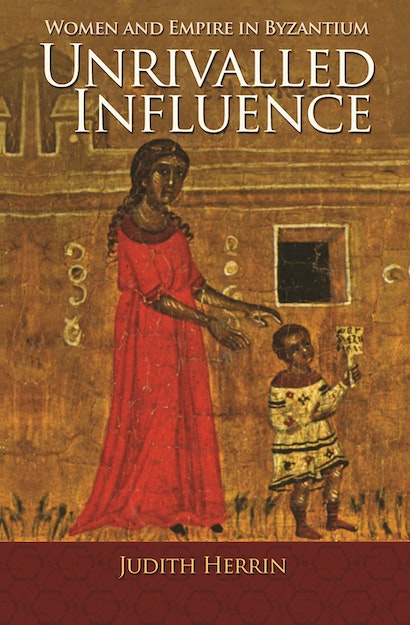 Unrivalled Influence explores the exceptional roles that women played in the vibrant cultural and political life of medieval Byzantium. Written by one of the world’s foremost historians of the Byzantine millennium, this landmark book evokes the complex and exotic world of Byzantium’s women, from empresses and saints to uneducated rural widows. Drawing on a diverse range of sources, Judith Herrin sheds light on the importance of marriage in imperial statecraft, the tense coexistence of empresses in the imperial court, and the critical relationships of mothers and daughters. She looks at women’s interactions with eunuchs, the in-between gender in Byzantine society, and shows how women defended their rights to hold land. Herrin describes how they controlled their inheritances, participated in urban crowds demanding the dismissal of corrupt officials, followed the processions of holy icons and relics, and marked religious feasts with liturgical celebrations, market activity, and holiday pleasures. The vivid portraits that emerge here reveal how women exerted an unrivalled influence on the patriarchal society of Byzantium, and remained active participants in the many changes that occurred throughout the empire’s millennial history.

Unrivalled Influence brings together Herrin’s finest essays on women and gender written throughout the long span of her esteemed career. This volume includes three new essays published here for the very first time and a new general introduction by Herrin. She also provides a concise introduction to each essay that describes how it came to be written and how it fits into her broader views about women and Byzantium.

Judith Herrin is the Constantine Leventis Senior Research Fellow at the Centre for Hellenic Studies at King's College London. She is the author of Byzantium: The Surprising Life of a Medieval Empire, Women in Purple: Rulers of Medieval Byzantium, and The Formation of Christendom (all Princeton).

"[A] welcome corrective to long-standing cartoon-like images of Byzantine women as over-sexed in public and over-pious in private."—Christopher Kelly, Times Literary Supplement

"Judith Herrin, whose vision is both consistent and reasonable, has been and remains one ofthe most constructive and innovative scholars in the field of Byzantine history. I have followedher work for nearly thirty-five years and, while I have not always agreed with everything thatshe has written, I have never failed to be impressed by the clarity of her argumentation whichoften compelled me to reconsider my own views. Unrivalled is a worthwhile read for anyonewho wishes to see the interplay of research and biography, to learn about an understudied aspectof Byzantine history and society, and to enjoy thoughtful and thought-provoking scholarship."—David Olster, European Legacy

"Herrin dissolves the most formidable barrier to any balanced history: the wall between women's history and men's. With an eye for details ignored and grand lines distorted by scholarly myopia, she offers a comprehensive history of Byzantium."—Thomas F. Mathews, author of The Clash of Gods: A Reinterpretation of Early Christian Art