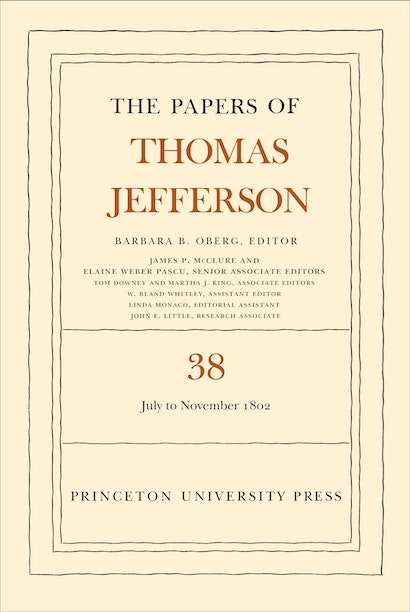 Volume 38 opens on 1 July 1802, when Jefferson is in Washington, and closes on 12 November, when he is again there. For the last week of July and all of August and September, he resides at Monticello. Frequent correspondence with his heads of department and two visits with Secretary of State James Madison, however, keep the president abreast of matters of state. Upon learning in August of the declaration of war by Mawlay Sulayman, the sultan of Morocco, much of the president’s and the cabinet’s attention is focused on that issue, as they struggle to balance American diplomatic efforts with reliance on the country’s naval power in the Mediterranean. Jefferson terms the sultan’s actions “palpably against reason.” In September, he addresses the concerns of the mayor of New York City and the governor of South Carolina that free blacks expelled from Guadeloupe by the French will be landed onto American shores. Although he believes the matter will be dealt with by the states, he also instructs Secretary of the Treasury Albert Gallatin to direct custom house officers to be watchful. In late August, Jefferson is alerted that he has been touched by the “breath of Slander,” when James T. Callender’s accusations appear in the Richmond Recorder and make public his relationship with Sally Hemings. The president offers no comment, and a month later returns to Washington, where he continues planning for an impending visit by his daughters.