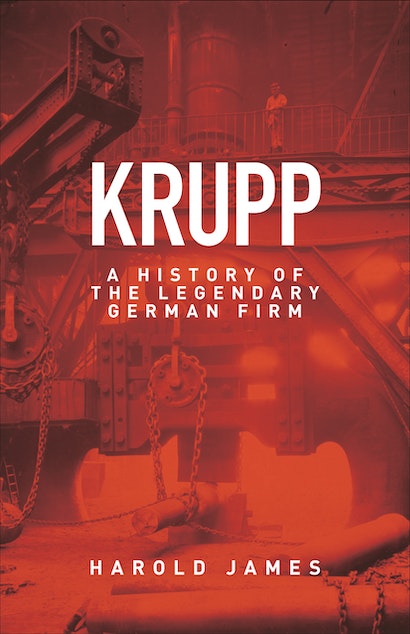 The history of Krupp is the history of modern Germany. No company symbolized the best and worst of that history more than the famous steel and arms maker. In this book, Harold James tells the story of the Krupp family and its industrial empire between the early nineteenth century and the present, and analyzes its transition from a family business to one owned by a nonprofit foundation.

Krupp founded a small steel mill in 1811, which established the basis for one of the largest and most important companies in the world by the end of the century. Famously loyal to its highly paid workers, it rejected an exclusive focus on profit, but the company also played a central role in the armament of Nazi Germany and the firm’s head was convicted as a war criminal at Nuremberg. Yet after the war Krupp managed to rebuild itself and become a symbol of Germany once again—this time open, economically successful, and socially responsible.

Books on Krupp tend to either denounce it as a diabolical enterprise or celebrate its technical ingenuity. In contrast, James presents a balanced account, showing that the owners felt ambivalent about the company’s military connection even while becoming more and more entangled in Germany’s aggressive politics during the imperial era and the Third Reich.

By placing the story of Krupp and its owners in a wide context, James also provides new insights into the political, social, and economic history of modern Germany.

Harold James is professor of history and international affairs and the Claude and Lore Kelly Professor of European Studies at Princeton University. His books include The Creation and Destruction of Value, The End of Globalization, and Family Capitalism. He was awarded the 2004 Helmut Schmidt Prize for Economic History, and the 2005 Ludwig Erhard Prize for economics writing. He is also the Marie Curie Visiting Professor at the European University Institute.

"Krupp is a meticulous company history, enhanced by the author's immersion in the company's archives. The book is also, inevitably, the biography of a family. . . . Krupp rewards a reader's effort. The book shows us not only a family and a company, but also the state in its various forms with which Krupp has been associated for two centuries. The Krupp story remains troubling, but Mr. James has done much to give us a richer understanding of a company saddled with one ignoble chapter in a long history."—Jennifer Siegel, Wall Street Journal

"What is good about Harold James' writing is that he does not make judgments or take sides. He allows the reader to do that."—R. Balashankar, Organiser

"Krupp has provided a reasonable, balanced summary of the company's history and the men driving it. As such the book will be an interesting read for the layperson interested in business history in general and the disputed history of Krupp in particular."—Armin Grünbacher, Economic History Review

"Harold James has succeeded in writing a concise account of one of the pivotal protagonists of German economic history. His book is accessible to a wide public while meeting academic standards and will surely become a point of reference for anyone interested in the history of Krupp."—Christof Dejung, German Historical Institute London

"A significant merit of Harold James' book on Krupp is that he melts the firm's history down into a readable approach. For someone acquainted with the history of the company, the study does not offer many new insights, but the work is solid and the author's judgments and evaluations are in most cases well founded. . . . James has written an interesting book, the first overall view of Krupp's history that meets scholarly standards."—Roman Koster, German History

"Review of German edition: "This is a masterfully told and unprejudiced book about a traditional enterprise which despite many crises made its way into the twenty-first century.""—Joachim Käppner, Süddeutsche Zeitung

"Harold James has written a concise yet compulsively readable history of what was once the most notorious name in German industrial history. Elegantly weaving together economic, political, and cultural history, he shows how Krupp rose to a position of dominance in the Central European arms industry thanks to the extraordinary work ethic of the founder's son and the family's early ability to tap informal credit networks, but, above all, the almost symbiotic relationship between the company and the German state, its biggest customer. James shows that Krupp was not a pure arms company. Nor was it exceptional among big firms in its complicity with the criminal Nazi regime. Yet at the heart of his story is a Faustian pact between an entrepreneurial family and a power-hungry polity."—Niall Ferguson, Harvard University

"More than a biography of a remarkable family, this fast-paced narrative, studded with vivid portraits and shrewd judgments, follows a firm that was once the largest in Europe as it navigated the existential crises of wars, inflations, depressions, dictatorships, and globalizations. Illuminating a corporate culture famous for its technological and marketing innovations, its paternalism and commitment to tradition, and its hostility to banks and indifference to profits, James offers us a deeper understanding of what makes German—and European—capitalism so different from our own."—Margaret Lavinia Anderson, University of California, Berkeley

"Drawing on his deep knowledge of German economic and political history, Harold James has written an important book of impressive range and scope that focuses not merely on the Krupp family but also on the role of technological change, the company's relationships with banks and governments, and the effects of international competition and war."—V. R. Berghahn, Columbia University