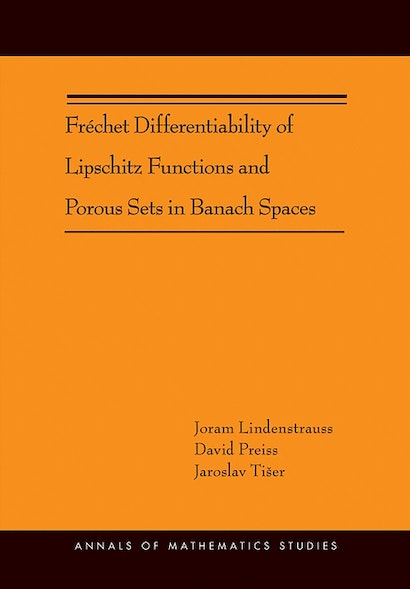 This book makes a significant inroad into the unexpectedly difficult question of existence of Fréchet derivatives of Lipschitz maps of Banach spaces into higher dimensional spaces. Because the question turns out to be closely related to porous sets in Banach spaces, it provides a bridge between descriptive set theory and the classical topic of existence of derivatives of vector-valued Lipschitz functions. The topic is relevant to classical analysis and descriptive set theory on Banach spaces. The book opens several new research directions in this area of geometric nonlinear functional analysis.


The new methods developed here include a game approach to perturbational variational principles that is of independent interest. Detailed explanation of the underlying ideas and motivation behind the proofs of the new results on Fréchet differentiability of vector-valued functions should make these arguments accessible to a wider audience. The most important special case of the differentiability results, that Lipschitz mappings from a Hilbert space into the plane have points of Fréchet differentiability, is given its own chapter with a proof that is independent of much of the work done to prove more general results. The book raises several open questions concerning its two main topics.

"The book is well written—as one would expect from its distinguished authors, including the late Joram Lindestrauss (1936-2012). It contains many fascinating and profound results. It no doubt will become an important resource for anyone who is seriously interested in the differentiability of functions between Banach spaces."—J. Borwein and Liangjin Yao, Mathematical Reviews Clippings

"[T]his is a very deep and complete study on the differentiability of Lipschitz mappings between Banach spaces, an unavoidable reference for anyone seriously interested in this topic."—Daniel Azagra, European Mathematical Society

"We should be grateful to (the late) Joram Lindenstrauss, David Preiss, and Jaroslav Tiser for providing us with this splendid book which dives into the deepest fields of functional analysis, where the basic but still strange operation called differentiation is investigated. More than a century after Lebesgue, our understanding is not complete. But thanks to the contribution of these three authors, and thanks to this book, we know a fair share of beautiful theorems and challenging problems."—Gilles Godefroy, Bulletin of the American Mathematical Society