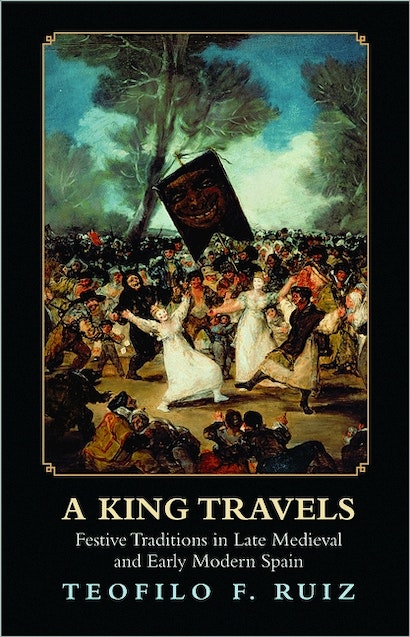 A King Travels examines the scripting and performance of festivals in Spain between 1327 and 1620, offering an unprecedented look at the different types of festivals that were held in Iberia during this crucial period of European history. Bridging the gap between the medieval and early modern eras, Teofilo Ruiz focuses on the travels and festivities of Philip II, exploring the complex relationship between power and ceremony, and offering a vibrant portrait of Spain’s cultural and political life.


Ruiz covers a range of festival categories: carnival, royal entries, tournaments, calendrical and noncalendrical celebrations, autos de fe, and Corpus Christi processions. He probes the ritual meanings of these events, paying special attention to the use of colors and symbols, and to the power relations articulated through these festive displays. Ruiz argues that the fluid and at times subversive character of medieval festivals gave way to highly formalized and hierarchical events reflecting a broader shift in how power was articulated in late medieval and early modern Spain. Yet Ruiz contends that these festivals, while they sought to buttress authority and instruct different social orders about hierarchies of power, also served as sites of contestation, dialogue, and resistance.

A King Travels sheds new light on Iberian festive traditions and their unique role in the centralizing state in early modern Castile.

Teofilo F. Ruiz is Distinguished Professor of History at the University of California, Los Angeles. His many books include The Terror of History: On the Uncertainties of Life in Western Civilization and From Heaven to Earth: The Reordering of Castilian Society, 1150-1350 (both Princeton).

"Accomplished historian Ruiz examines festivals in Spain from approximately 1200 to the mid-17th century. Starting from the premise that these events conveyed social, political, and ideological content, the author argues effectively that a close analysis over time of various festivals and related traditions—e.g., those associated with royal entries and visits to major municipalities; royal births, weddings, and funerals; Corpus Christi and Carnival—improves historians' understanding of changes in political processes and culture. . . . The book provides information and insight that anthropologists, students of Spanish literature, and historians of Spain and colonial Spanish America will draw upon for many years."—Choice

"[O]ne may recommend the present study as a labour of love—a detailed and interesting introduction to that colourful world of chivalry which, as he confesses, has captivated the author since his youth."—James Casey, European History Quarterly

"Ruiz is . . . a master storyteller. The chroniclers who originally recounted these festivities and processions in loving detail intended to recreate for their readers a complete vision of the clothing, music, food, decorative arches, dances, and jousts that constituted them, and Ruiz has done the same service for us."—Jodi Campbell, English Historical Review

"This study brings to the forefront the Iberian Peninsula, a geographical area usually neglected in the studies of these celebrations, while it informs, enlightens, and entertains. A great read."—Candelas Gala, European Legacy

"In this engaging book, Teofilo Ruiz shows himself to be a supreme master of ceremonies. Taking as his point of departure the travels of Philip II of Spain, he places the ceremonies and festivities with which the king was everywhere greeted into the general context of Iberian festive practices and traditions. While describing numerous festive occasions with a wealth of colorful detail, the book makes a valuable contribution to our understanding of continuity and change in Spanish political, social, and cultural life between the High Middle Ages and the seventeenth century."—Sir John Elliott, University of Oxford

"This book opens a new chapter in our current understanding of Spanish ceremonial life. And except for books published in Spanish, it virtually stands alone. It spans two broad periods of time, contrasting and comparing the Middle Ages with the early modern era, and does so in an engagingly, very appealing manner. Ruiz's study is both original and important."—Richard L. Kagan, Johns Hopkins University