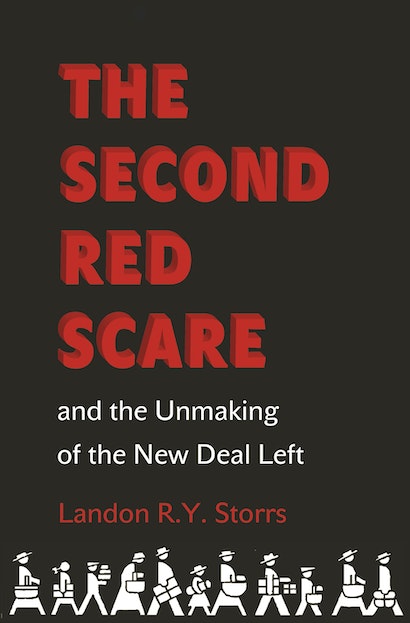 In the name of protecting Americans from Soviet espionage, the post-1945 Red Scare curtailed the reform agenda of the New Deal. The crisis of the Great Depression had brought into government a group of policy experts who argued that saving democracy required attacking economic and social inequalities. The influence of these men and women within the Franklin D. Roosevelt administration, and their alliances with progressive social movements, elicited a powerful reaction from conservatives, who accused them of being subversives. Landon Storrs draws on newly declassified records of the federal employee loyalty program—created in response to claims that Communists were infiltrating the U.S. government—to reveal how disloyalty charges were used to silence these New Dealers and discredit their policies.

Because loyalty investigators rarely distinguished between Communists and other leftists, many noncommunist leftists were forced to leave government or deny their political views. Storrs finds that loyalty defendants were more numerous at higher ranks of the civil service than previously thought, and that many were women, or men with accomplished leftist wives. Uncovering a forceful left-feminist presence in the New Deal, she also shows how opponents on the Right exploited popular hostility to powerful women and their supposedly effeminate spouses. The loyalty program not only destroyed many promising careers, it prohibited discussion of social democratic policy ideas in government circles, narrowing the scope of political discourse to this day.

What McCarthyism can teach us about Trumpism

Landon R. Y. Storrs is professor of history at the University of Iowa. She is the author of Civilizing Capitalism: The National Consumers' League, Women's Activism, and Labor Standards in the New Deal Era.

"In her persuasive new book, Landon Storrs . . . provides a fascinating account of how we lost our path to a New Deal by succumbing to the politics of fear. . . . [T]he powerful anticommunist movement, which silenced feminism (among other social movements), helped to move social policy away from the left-liberal consensus of the thirties and toward the less vital center, where it has remained ever since."—Alice Kessler-Harris, Women's Review of Books

"[I]mportant, portentous work . . . the means by which the once powerful American Left was reduced to stigmatized impotence were far from pretty. In fact, Storrs argues convincingly that historians have yet to grasp just how ugly they were."—David Hawkes, Times Literary Supplement

"Why is there no socialism in the United States? In this book, University of Iowa history professor Landon R. Y. Storrs proposes a new answer: Much more than previously supposed, left-leaning policy makers were targeted by government 'loyalty' investigations and intimidated into adopting conservative ideas. In making the argument, Storrs does a lot of spectacular things."—Rick Perlstein, Bookforum

"An exceptional piece of detective work, The Second Red Scare is one of the finest books written on the McCarthy era in the last decade and raises important questions that will no doubt be debated at length in the decade to come."—Alex Goodall, Journal of American Studies

"Storrs' research in the brilliant book is prodigious. . . . Her accomplishment . . . is truly awesome, as she creates a giant jigsaw puzzle, methodically putting each piece in its place to reveal an unexpected picture."—M. J. Heale, Reviews in American History

"[F]ascinating. . . . [Storrs] has uncovered many fascinating stories of dedicated public servants whose careers were cut short, with a chilling impact on government programs, and further documents the negative aspects of the anticommunist crusade beginning during the New Deal and long continuing."—Choice

"Storrs casts a wide net with this book and offers a sweeping analysis of an understudied component of the anticommunist investigations of the Second Red Scare. It pushes forward our thinking on the origins of McCarthyism, the effects of New Deal reform on later social movements, and the influence of anticommunist sentiment on American culture, politics, and federal policymaking. In addition to scholars of the period, this well-crafted book will appeal to graduate and undergraduate audiences studying twentieth-century reform efforts."—Aaron D. Purcell, American Historical Review

"The book has a wonderful richness and depth, and the whole period is dramatically revived as Storrs uses biographies of individuals who participated in the various movements to illustrate this history."—Bill Barry, Labor Studies Journal

"The book provides a fresh and exciting perspective on two aspects of New Deal and early Cold War politics that deserve the forensic attention Storrs affords them. . . . [T]he fact that I ended up asking serious questions about the Left in the United States in these years is testimony to the powerful research and probing of political figures and ideas too often obscured in American historiography but revealed in this book in vibrant detail."—Jonathan Bell, Journal of American History

"In this meticulously researched book, Landon Storrs provides a powerful account of a collision between two groups. . . . It is difficult to find fault with this finely crafted and wonderfully researched study."—Fred Block, Women and Social Movements in U.S.

"Riveting and timely. Storrs cuts through the endless debates on the impact of the Second Red Scare to show in concrete detail how it destroyed a vibrant social-democratic tradition in American politics. Mining never before used sources, she also demonstrates how important the feminist Left was to the New Deal and how central antifeminism was to the Right. Anyone who cares about the policy challenges of our own time should read this book."—Jacquelyn Hall, University of North Carolina, Chapel Hill

"This is the most original and important book on the New Deal in years. Landon Storrs reveals for the first time how conservatives silenced visionary social-democratic women and men, who came closer than we've ever realized to creating an inclusive America. With heroic detective work, Storrs has uncovered a national tragedy of epic proportions."—Nancy MacLean, author of Freedom Is Not Enough: The Opening of the American Workplace

"In this devastating yet fair-minded account of the hitherto unknown impact of the federal loyalty-security program on the New Deal's noncommunist radicals and feminists, Landon Storrs has produced what is by far the best book on the political consequences of the Cold War Red Scare in Washington."—Ellen Schrecker, Yeshiva University

"This richly detailed and fluently written study forces us to rethink the ideology of New Deal policymakers, both women and men, and the aims of their well-entrenched conservative opponents. As Storrs makes clear, the political conflict that raged during the 1930s and 1940s has, in many ways, continued into our own time."—Michael Kazin, author of American Dreamers: How the Left Changed a Nation

"This important book provides a fresh look at the chilling effect of the loyalty hearings in 1940s and 1950s America. Storrs argues that the anticommunist crusade had an impact above and beyond ruining lives. It changed the political discourse of the country, undermined any move toward social democracy, impeded feminism, and was far more corrosive than we think. The Second Red Scare and the Unmaking of the New Deal Left is an outstanding work of scholarship."—Allan M. Winkler, author of The Cold War