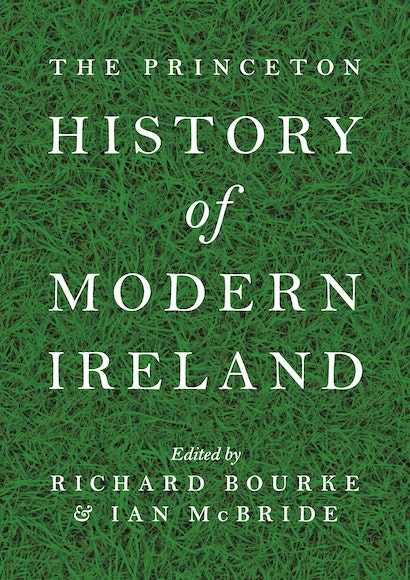 This book brings together some of today’s most exciting scholars of Irish history to chart the pivotal events in the history of modern Ireland while providing fresh perspectives on topics ranging from colonialism and nationalism to political violence, famine, emigration, and feminism.

The Princeton History of Modern Ireland takes readers from the Tudor conquest in the sixteenth century to the contemporary boom and bust of the Celtic Tiger, exploring key political developments as well as major social and cultural movements. Contributors describe how the experiences of empire and diaspora have determined Ireland’s position in the wider world and analyze them alongside domestic changes ranging from the Irish language to the economy. They trace the literary and intellectual history of Ireland from Jonathan Swift to Seamus Heaney and look at important shifts in ideology and belief, delving into subjects such as religion, gender, and Fenianism.

Presenting the latest cutting-edge scholarship by a new generation of historians of Ireland, The Princeton History of Modern Ireland features narrative chapters on Irish history followed by thematic chapters on key topics. The book highlights the global reach of the Irish experience as well as commonalities shared across Europe, and brings vividly to life an Irish past shaped by conquest, plantation, assimilation, revolution, and partition.

Richard Bourke is professor of the history of political thought and a fellow of King's College, University of Cambridge. He is the author of Empire and Revolution: The Political Life of Edmund Burke (Princeton). Ian McBride is professor of Irish and British history at King's College London. His books include Eighteenth-Century Ireland: The Isle of Slaves.

"The Princeton History of Modern Ireland constitutes a landmark in the interpretation of Irish history by a lavishly talented new generation of historians. . . . It has to be accounted a vital contribution to Irish self-examination at a key moment in the country's history."—Roy Foster, Times Literary Supplement

"The scholarship is formidable: all the chapters are grounded in the most up-to-date research, all are substantial, the best sparkle with original insights."—Gearóid Ó Tuathaigh, Irish Times

"History at its best. . . . The Princeton History of Modern Ireland is an important, well-written and highly enjoyable contribution to making historical sense of Irish history."—Arthur Aughey, Irish Political Studies

"This superb collection of essays is presented explicitly as a state-of the-art report on historical scholarship by the current, successor, generation of Irish historians."—James Smyth, History Ireland

"[An] excellent collection of essays. . . . Anyone with an interest in researching, teaching, or simply gaining a fuller understanding of modern Ireland should start by consulting this invaluable resource."—Choice

"A wonderful volume of very sound and excellent essays, beautifully written and introduced by an admirably clear and concise political history from the 16th to the 21st century. . . . All of the essays . . . are worthy of this superb collection of 22 examples of the best modern historical research and examination, itself a model for how academic writing in an illiterate age should be done."—CW, Chronicles

"The Princeton History of Modern Ireland is an outstanding book and a tribute to the flourishing state of Irish historiography. . . . A short review is an inadequate vehicle to do justice to the richness and complexity of the various essays in this collection, or to their vitality. But suffice it to say that the Princeton History of Modern Ireland will prove quite indispensable to any serious student of Irish, or indeed British, history."—Vernon Bogdonor, Journal of British Studies

"To say [The Princeton History of Modern Ireland is] a gem of a history book may be an understatement."—Michael P. Toner, Irish Edition

"Alert to the contingency and complexity of the past, these brisk, original, and highly engaging essays portray Ireland's historical development as a matter of accident as well as design, the product of conflict and conciliation rather than the predetermined unfolding of a nation's destiny. The contributors emphasize how Irish history took place within the context of Europe, the British Empire, and the diaspora, thereby accomplishing the important task of liberating their subject from the confines of exceptionalism."—Kevin Kenny, author of The American Irish: A History

"A marvelous collection. The essays are authoritative, comprehensive, and nuanced, but at times also spiky, opinionated, and subversive of established pieties. There is something for everyone here. The book functions as an ideal primer for the uninitiated and for undergraduate students. However, experts will also find the state of the art convincingly mapped out, with many pointers toward new directions and unexplored avenues in Irish historiography."—Colin Kidd, University of St Andrews

"A stunning collection of essays by a new generation of Irish historians, bringing our knowledge right up to date and opening up original and thought-provoking pathways for future research."—Marianne Elliott, author of When God Took Sides: Religion and Identity in Ireland—Unfinished History

"Frequently sparkling with transcendent brilliance, this history of modern Ireland is an invaluable collection."—J. J. Lee, author of Ireland, 1912–1985

"Bourke and McBride have achieved broad coverage and in-depth analysis of many of the key dimensions and problems in Irish history. This invaluable book commends itself to readers for its comprehensiveness, clarity, and the contributors' courage in challenging received assumptions about Ireland and exploring Irish history in a wider global context."—Eugenio F. Biagini, author of British Democracy and Irish Nationalism 1876–1906