An entertaining look at the origins of mathematical symbols 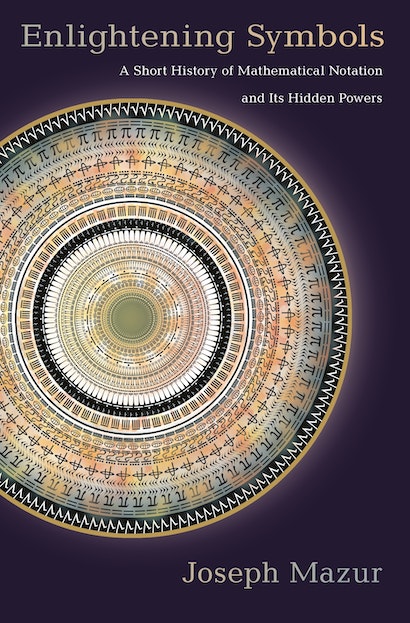 While all of us regularly use basic math symbols such as those for plus, minus, and equals, few of us know that many of these symbols weren’t available before the sixteenth century. What did mathematicians rely on for their work before then? And how did mathematical notations evolve into what we know today? In Enlightening Symbols, popular math writer Joseph Mazur explains the fascinating history behind the development of our mathematical notation system. He shows how symbols were used initially, how one symbol replaced another over time, and how written math was conveyed before and after symbols became widely adopted.

Traversing mathematical history and the foundations of numerals in different cultures, Mazur looks at how historians have disagreed over the origins of the numerical system for the past two centuries. He follows the transfigurations of algebra from a rhetorical style to a symbolic one, demonstrating that most algebra before the sixteenth century was written in prose or in verse employing the written names of numerals. Mazur also investigates the subconscious and psychological effects that mathematical symbols have had on mathematical thought, moods, meaning, communication, and comprehension. He considers how these symbols influence us (through similarity, association, identity, resemblance, and repeated imagery), how they lead to new ideas by subconscious associations, how they make connections between experience and the unknown, and how they contribute to the communication of basic mathematics.

From words to abbreviations to symbols, this book shows how math evolved to the familiar forms we use today.

Joseph Mazur is the author of Euclid in the Rainforest (Plume), which was a finalist for the PEN/Martha Albrand Award, Zeno's Paradox (Plume), What's Luck Got to Do with It? (Princeton), and Fluke (Basic).

"Mazur (Euclid in the Rainforest) gives readers the fascinating history behind the mathematical symbols we use, and completely take for granted, every day. Mathematical notation turns numbers into sentences—or, to the uninitiated, a mysterious and impenetrable code. Mazur says the story of math symbols begins some 3,700 years ago, in ancient Babylon, where merchants incised tallies of goods on cuneiform tablets, along with the first place holder—a blank space. Many early cultures used letters for both numbers and an alphabet, but convenient objects like rods, fingers, and abacus beads, also proved popular. Mazur shows how our 'modern' system began in India, picking up the numeral 'zero' on its way to Europe, where it came into common use in the 16th century, thanks to travelers and merchants as well as mathematicians like Fibonacci. Signs for addition, subtraction, roots, and equivalence followed, but only became standardized through the influence of scientists and mathematicians like René Descartes and Gottfried Leibniz. Mazur's lively and accessible writing makes what could otherwise be a dry, arcane history as entertaining as it is informative."—Publishers Weekly

"[A] fascinating narrative. . . . This is a nuanced, intelligently framed chronicle packed with nuggets—such as the fact that Hindus, not Arabs, introduced Arabic numerals. In a word: enlightening."—George Szpiro, Nature

"Mazur begins by illustrating how the ancient Incas and Mayans managed to write specific, huge numbers. Then, for more than 200 pages, he traces the history of division signs, square roots, pi, exponents, graph axes and other symbols in the context of cognition, communication, and analysis."—Washington Post

"Mazur delivers a solid exposition of an element of mathematics that is fundamental to its history."—Library Journal

"Mazur treats only a subset of F. Cajori's monumental A History of Mathematical Notation (Dover, 1993 first edition 1922) and there is overlap with many other mathematical history books, but Mazur adds new findings and insights and it is so much more entertaining . . . and these features make it an interesting addition to the existing literature for anybody with only a slight interest in mathematics or its history."—European Mathematical Society

"Symbols like '+' and '=' are so ingrained that it's hard to conceive of math without them. But a new book, Enlightening Symbols: A Short History of Mathematical Notation and its Hidden Power, offers a surprising reminder: Until the early 16th century, math contained no symbols at all."—Kevin Hartnett, Boston Globe

"If you enjoy reading about history, languages and science, then you'll enjoy this book. . . . The best part is the writing is compelling enough that you don't have to be a mathematician to enjoy this informative book."—Guardian.com's, GrrlScientist

"[T]his insightful account of the historical development of a highly characteristic feature of the mathematical enterprise also represents a valuable contribution to our understanding of the nature of mathematics."—Eduard Glas, Mathematical Reviews Clippings

"Joseph Mazur's beautiful book Enlightening Symbols tells the story of human civilization through the development of mathematical notation. Surprises abound. . . . The book is visually exquisite, great care having been taken with illustrations and figures. Mazur's discussion of the emergence of particular symbols affords the reader an overview of the often difficult primary literature."—Donal O'Shea, Sarasota Herald-Tribune

"At whatever depth one chooses to read it, Enlightening Symbols has something for everyone. It is entertaining and eclectic, and Mazur's personal and easy style helps connect us with those who led the long and winding search for the best ways to quantify and analyze our world. Their success has liberated us from 'the shackles of our physical impressions of space'—and of the particular and the concrete—'enabling imagination to wander far beyond the tangible world we live in, and into the marvels of generality.'"—Robyn Arianrhod, Notices of the Notices of the American Mathematical Society

"Mazur introduces the reader to major characters, weaves in relevant aspects of wider culture and gives a feel for the breadth of mathematical history. It is a useful book for both student and interested layperson alike."—Mark McCartney, London Mathematical Society

"[T]his is a good book. It is well written by an experienced author and is full of interesting facts about how the symbols used in mathematics have arisen. It would certainly interest anyone who studies the history of mathematics."—Phil Dyke, Leonardo

"Mazur is a master story teller."—John Stillwell, Bulletin of the American Mathematical Society

"This book provides an insightful synthesis of the historical and mental revolutions that created humanity's most useful symbols—mathematical expressions."—Stanislas Dehaene, author of Reading in the Brain

"Mathematical symbols are much more than squiggles on paper—they serve as potent sources of insight into a wonderfully complex language. In this book, Joseph Mazur takes us on a fascinating journey into the origins of these symbols. You cannot ask for a better guide."—Mario Livio, astrophysicist and author of Brilliant Blunders

"Joseph Mazur teaches us that the history of mathematical notation is the history of human civilization."—Kenneth A. Ribet, University of California, Berkeley

"In this thoughtful, entertaining, and carefully researched book, Mazur lays out the development of the mathematical notations and symbols that we take for granted. He offers a fascinating look at the history of the conventions of writing mathematical ideas, and shows how important our choice of conventions has been for the growth of mathematical knowledge."—Emily R. Grosholz, author of Representation and Productive Ambiguity in Mathematics and the Sciences

"Worldwide, mathematicians speak a common symbolic language. Mazur traces how symbols developed and gradually took hold, uniting arithmetic, algebra, and geometry to give us metaphors as powerful as those of poems. A fascinating history!"—Philip Holmes, coauthor of Celestial Encounters

"Enlightening Symbols explains the origins of symbols used in mathematics. But this fun book is so much more than this. Filled with interesting stories, captivating material, and delightful observations, it offers readers a better understanding of the nature of mathematics and a wonderful overview of mathematical history."—Dominic Klyve, Central Washington University

"An enjoyable and informative tour of mathematics history, Enlightening Symbols describes how our modern system of notation led to the abstraction we work with today. This is an important and interesting story."—Anna Pierrehumbert, Trinity School