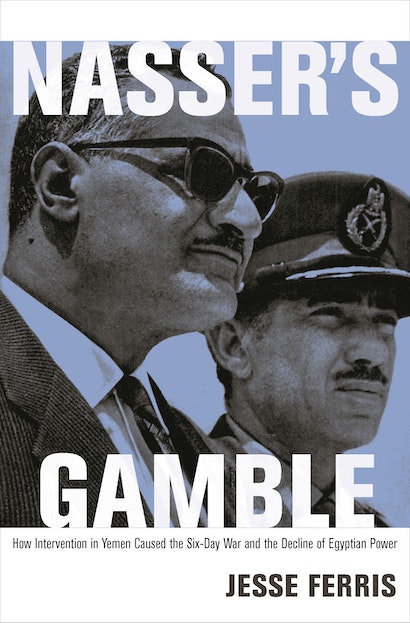 Nasser’s Gamble draws on declassified documents from six countries and original material in Arabic, German, Hebrew, and Russian to present a new understanding of Egypt’s disastrous five-year intervention in Yemen, which Egyptian president Gamal Abdel Nasser later referred to as “my Vietnam.” Jesse Ferris argues that Nasser’s attempt to export the Egyptian revolution to Yemen played a decisive role in destabilizing Egypt’s relations with the Cold War powers, tarnishing its image in the Arab world, ruining its economy, and driving its rulers to instigate the fatal series of missteps that led to war with Israel in 1967.


Viewing the Six Day War as an unintended consequence of the Saudi-Egyptian struggle over Yemen, Ferris demonstrates that the most important Cold War conflict in the Middle East was not the clash between Israel and its neighbors. It was the inter-Arab struggle between monarchies and republics over power and legitimacy. Egypt’s defeat in the “Arab Cold War” set the stage for the rise of Saudi Arabia and political Islam.


Bold and provocative, Nasser’s Gamble brings to life a critical phase in the modern history of the Middle East. Its compelling analysis of Egypt’s fall from power in the 1960s offers new insights into the decline of Arab nationalism, exposing the deep historical roots of the Arab Spring of 2011.

Jesse Ferris is vice president for strategy at the Israel Democracy Institute and a historian of the modern Middle East.

"[R]equired reading for those interested in the history of the Middle East."—Laura James, History Today

"Nasser's Gamble draws on an impressive selection of Russian, US and British diplomatic archives, as well as the Arabic language memoirs of politicians and senior military officials and contemporary press coverage. The book provides a precise and deeply researched analysis of the conflict."—Richard Phelps, International Affairs

"In masterly fashion, Ferris explains the consequences of those adventures for Egypt, inter-Arab relations, the Middle East, and the broad lines of its future development. Reading this book is indeed a most rewarding experience."—David Sultan, Israel Journal of Foreign Affairs

"Ferris's book is an expansion of his PhD dissertation at Princeton, very well written, based on credible sources not formerly available, and well documented. His bibliographical notes and extensive list of sources will lead readers to plenty of materials for further investigation."—Daniel Spector, H-Net Reviews

"Nasser's Gamble tells the story of Egypt's intervention in Yemen, a venture that was supposed to last weeks but which dragged on for more than five years before Egyptian troops were finally withdrawn. The point Ferris makes—and he does it exceptionally well—is that the Yemeni episode bears much of the responsibility for the decline of Egyptian power in the 1960s."—Adeed Dawisha, author of Iraq: A Political History from Independence to Occupation

"An engrossing and lively narrative. Ferris has taken advantage of the release of many important Soviet documents and has also made very extensive use of documents from U.S. and British archives, a host of memoirs and other sources in Arabic, and some exceedingly useful items in Hebrew. Nasser's Gamble is a model of how a true international history should be written."—Mark Kramer, Harvard University