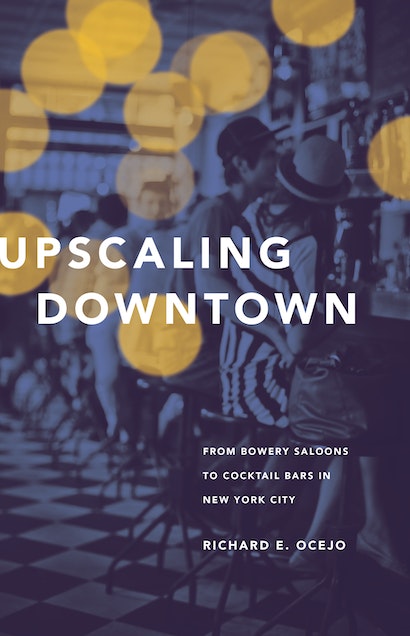 Once known for slum-like conditions in its immigrant and working-class neighborhoods, New York City’s downtown now features luxury housing, chic boutiques and hotels, and, most notably, a vibrant nightlife culture. While a burgeoning bar scene can be viewed as a positive sign of urban transformation, tensions lurk beneath, reflecting the social conflicts within postindustrial cities. Upscaling Downtown examines the perspectives and actions of disparate social groups who have been affected by or played a role in the nightlife of the Lower East Side, East Village, and Bowery. Using the social world of bars as windows into understanding urban development, Richard Ocejo argues that the gentrifying neighborhoods of postindustrial cities are increasingly influenced by upscale commercial projects, causing significant conflicts for the people involved.

Ocejo explores what community institutions, such as neighborhood bars, gain or lose amid gentrification. He considers why residents continue unsuccessfully to protest the arrival of new bars, how new bar owners produce a nightlife culture that attracts visitors rather than locals, and how government actors, including elected officials and the police, regulate and encourage nightlife culture. By focusing on commercial newcomers and the residents who protest local changes, Ocejo illustrates the contested and dynamic process of neighborhood growth.

Delving into the social ecosystem of one emblematic section of Manhattan, Upscaling Downtown sheds fresh light on the tensions and consequences of urban progress.

Richard E. Ocejo is assistant professor of sociology at John Jay College of Criminal Justice, CUNY. He is the editor of Ethnography and the City: Readings on Doing Urban Fieldwork.

"Using bars as a barometer for gentrification, Ocejo explores the dynamics of change on New York City's Bowery, once a working-class neighborhood best known for its cheap hotels and skid-row denizens. . . . The lens on gentrification is unique, and the study contributes to a thriving body of work that explores the conflicts that emerge in formerly downtrodden neighborhoods when luxury housing, restaurants catering to a well-to-do crowd, and evolving concepts of quality of life displace long-term residents. . . . The strongly grounded analysis is enlivened by many interviews and casual conversations, illustrative of the hours of research and observation that informed the narrative and attest to the author's commitment to the project."—Choice

"Through this snapshot of several years in Bowery, Ocejo reveals much about meaning, power, and a specific kind of neighborhood change, happening (or happening soon) in an upscaling community near us all."—Zandria F. Robinson, City & Community

"Beautifully written. . . . Empirically thick and theoretically stimulating analysis, a welcome contribution, useful for students, scholars, and a broader audience, that helps to address the role and relevance that commercial transformations have in the processes of urban change."—Magda Bolzoni, Sociologica

"Ocejo is meticulous in the breadth and depth of his ethnographic data. By providing historical context, in-depth interviews, and lively ethnographic vignettes that weave together throughout the book, he provides us with both a diachronic and a synchronic overview of the urban nightlife within these three neighborhoods. . . . Upscaling Downtown does what great urban ethnography does: it richly details the specificities and uniqueness of particular places, while simultaneously provoking us to consider larger social processes, in this case the forging of local community and identity amid the changing social-cultural-economic consequences of gentrification."—Black Hawk Hancock, Social Forces

"A beautifully conceived and elegantly executed book that employs a magnifying glass to understand New York City. Focusing on bars in downtown Manhattan, Ocejo reveals the changing face of New York City in all its richness and complexity, enabling us to understand the key players in gentrification over time—old-timers, new arrivals, politicians, business owners, and activists—and how they interact and influence each other."—William B. Helmreich, author of The New York Nobody Knows

"From the artist cabarets of Montmartre and the juke joints of Harlem to the speakeasies of Chicago, the urban demimonde has long been integral to city identity. In today's city, nightlife plays an even more elevated role in places like New York's downtown, where once blighted districts are now thriving nocturnal playgrounds. Ocejo's thorough and thoroughly engaging work shines a light on the city after dark. It is the best book yet to examine the serious business of urban frivolity."—Richard Lloyd, author of Neo-Bohemia: Art and Commerce in the Postindustrial City

"This book offers a richly detailed picture of the new nighttime activities that are reshaping central cities around the world. Focusing on the rapid growth of bars on Manhattan's Lower East Side, Ocejo shows their remarkable transformation from a skid row institution to a cultural niche of the postindustrial urban economy. This is one of the best studies of New York to emerge in recent years."—Sharon Zukin, author of Naked City: The Death and Life of Authentic Urban Places

"In Upscaling Downtown, Ocejo gives a wide view of commercial gentrification and the conflicts between different factions in the Lower East Side, East Village, and Bowery. He presents a broad and critical perspective on the contemporary consumer megacity and provides a window onto wider issues of urban renewal, planning, policing, and community."—Paul E. Willis, Princeton University