How science in medieval Europe originated in Buddhist Asia 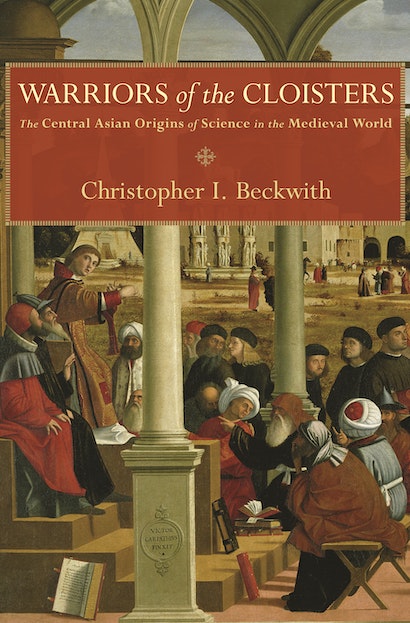 Warriors of the Cloisters tells how key cultural innovations from Central Asia revolutionized medieval Europe and gave rise to the culture of science in the West. Medieval scholars rarely performed scientific experiments, but instead contested issues in natural science, philosophy, and theology using the recursive argument method. This highly distinctive and unusual method of disputation was a core feature of medieval science, the predecessor of modern science. We know that the foundations of science were imported to Western Europe from the Islamic world, but until now the origins of such key elements of Islamic culture have been a mystery.

In this provocative book, Christopher I. Beckwith traces how the recursive argument method was first developed by Buddhist scholars and was spread by them throughout ancient Central Asia. He shows how the method was adopted by Islamic Central Asian natural philosophers—most importantly by Avicenna, one of the most brilliant of all medieval thinkers—and transmitted to the West when Avicenna’s works were translated into Latin in Spain in the twelfth century by the Jewish philosopher Ibn Da’ud and others. During the same period the institution of the college was also borrowed from the Islamic world. The college was where most of the disputations were held, and became the most important component of medieval Europe’s newly formed universities. As Beckwith demonstrates, the Islamic college also originated in Buddhist Central Asia.

Using in-depth analysis of ancient Buddhist, Classical Arabic, and Medieval Latin writings, Warriors of the Cloisters transforms our understanding of the origins of medieval scientific culture.

Christopher I. Beckwith is professor of Central Eurasian studies at Indiana University, Bloomington. His books include Empires of the Silk Road: A History of Central Eurasia from the Bronze Age to the Present and The Tibetan Empire in Central Asia: A History of the Struggle for Great Power among Tibetans, Turks, Arabs, and Chinese during the Early Middle Ages (both Princeton).

"[W]arriors of the Cloisters convincingly establishes the Central Asian origins of both the scholastic method and the university."—Choice

"To follow Beckwith is an enjoyable journey through many countries, civilizations, cultures and religions. This book is well worth reading for those who are interested in the spread of ideas and the interweaving of cultures, ideas and beliefs."—John Bowman, Middle Way

"[T]his is a major work of great significance."—Jeremy Black, European Review of History

"Building on a broad array of sources and studies, Beckwith highlights one of the early information circuits that crossed the Old World. Once again, Central Asia serves as the pivot of not only the political and military history of Eurasia, but of its intellectual development as well. Beckwith's erudite and wide-ranging study traces the complex paths via which these ideas and institutions spread, giving us a deeper understanding of the interconnections of Eurasian civilization and the underpinnings of modern science and thought."—Peter B. Golden, Rutgers University

"The insights contained in this book could not have come from anyone else but the inquisitive and resourceful Beckwith. Warriors of the Cloisters draws on research into an extraordinarily broad range of subjects and is certain to elicit debate."—S. Frederick Starr, Johns Hopkins University

"An outstanding and original contribution. Beckwith's interdisciplinary skills and linguistic versatility support a crucial and critical evaluation that challenges orthodox interpretations of the scholastic method as a solely European invention. Warriors of the Cloisters is likely to fuel scholarly debates and inspire new avenues of comparative research in Eurasian studies."—Georgios T. Halkias, Ruhr University