The most comprehensive account of the mathematician's life and work 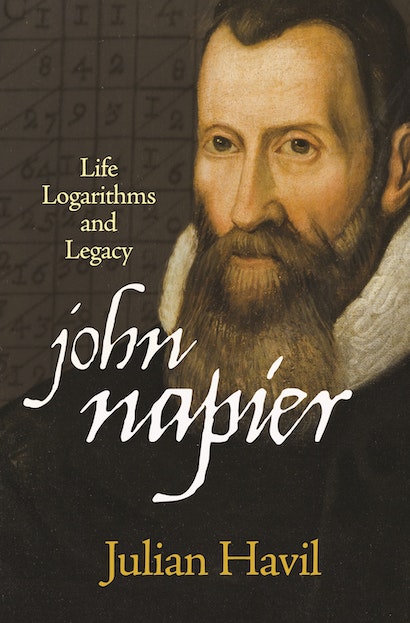 John Napier (1550–1617) is celebrated today as the man who invented logarithms—an enormous intellectual achievement that would soon lead to the development of their mechanical equivalent in the slide rule: the two would serve humanity as the principal means of calculation until the mid-1970s. Yet, despite Napier’s pioneering efforts, his life and work have not attracted detailed modern scrutiny. John Napier is the first contemporary biography to take an in-depth look at the multiple facets of Napier’s story: his privileged position as the eighth Laird of Merchiston and the son of influential Scottish landowners; his reputation as a magician who dabbled in alchemy; his interest in agriculture; his involvement with a notorious outlaw; his staunch anti-Catholic beliefs; his interactions with such peers as Henry Briggs, Johannes Kepler, and Tycho Brahe; and, most notably, his estimable mathematical legacy.

Julian Havil explores Napier’s original development of logarithms, the motivations for his approach, and the reasons behind certain adjustments to them. Napier’s inventive mathematical ideas also include formulas for solving spherical triangles, “Napier’s Bones” (a more basic but extremely popular alternative device for calculation), and the use of decimal notation for fractions and binary arithmetic. Havil also considers Napier’s study of the Book of Revelation, which led to his prediction of the Apocalypse in his first book, A Plaine Discovery of the Whole Revelation of St. John—the work for which Napier believed he would be most remembered.

John Napier assesses one man’s life and the lasting influence of his advancements on the mathematical sciences and beyond.

Julian Havil is the author of Gamma: Exploring Euler's Constant, Nonplussed!: Mathematical Proof of Implausible Ideas, Impossible?: Surprising Solutions to Counterintuitive Conundrums, and The Irrationals: A Story of the Numbers You Can't Count On (all Princeton). He is a retired former master at Winchester College, England, where he taught mathematics for more than three decades.

"In this engaging book, we learn more about Napier the mathematician, the religious zealot, the person."—Devorah Bennu, The Guardian

"Edinburgh born John Napier, the inventor of logarithms, is in danger of fading into the shadows of the scientific landscape. In the new book John Napier: Life, Logarithms, and Legacy, Julian Havil does a marvelous job of bringing Napier back into the spotlight."—Stephanie Blanda, American Mathematical Society

"I'm sure after reading this entertaining and enjoyable book, Napier will climb some rungs on your ladder of famous mathematicians."—A. Bultheel, European Mathematical Society

"Havil . . . gives a rich history of Napier's involvement in the Protestant reformation, his introduction of logarithms, and his legacy."—Choice

"With this book, the author continues his impressive series of illuminating, accessible monographs on the history of mathematics."—Bart J. I. Van Kerkhove, Mathematical Review

"This book fills a clear gap in published work on Napier and is likely to be the standard point of departure for those interested in his life and work for some years to come."—Mark McCartney, London Mathematical Society Newsletter

"Havil's attention to detail is without equal in the opinion of this reviewer."—John A. Adam, Scotia

"Havil is an enthusiastic and engaging writer—he brings to life John Napier's original work and gives an account of his mathematical ideas. Readers will gain an appreciation for Napier's brilliance and for an era when scientific computation was still in its infancy. It's about time someone wrote a book on this subject for a general audience."—Glen Van Brummelen, author of Heavenly Mathematics

"Offering a thorough look into Napier's contributions, family lineage, and life, this effectively organized book will be most useful to general readers and those with interests in Napier the man, the Reformation, early seventeenth-century mathematics, and Napier's influence on logarithms and scientific developments of the time."—Kathy Clark, Florida State University

"Havil has crafted a complete biography of John Napier, including detailed explanations of his mathematical creations, all in the proper historical context. Readers will gain a deep understanding of the background and uses of the logarithm, as well as the significance of Napier's achievement."—Paul C. Pasles, author of Benjamin Franklin's Numbers