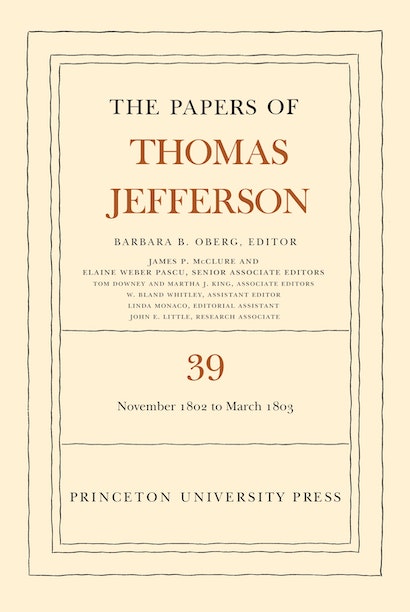 This volume opens on 13 November 1802, when Jefferson is in Washington, and closes on 3 March 1803, the final day of his second year as president. The central issue of these months is the closing of the right of deposit at New Orleans, an act that threatens the economic wellbeing of Westerners. Jefferson asks his old friend Pierre Samuel du Pont de Nemours to remind the French government of the strong friendship between the two nations. To disarm the political opposition, the president sends James Monroe, who is respected by the Federalists, to Europe as a special envoy to work with Robert Livingston in negotiating the dispute with France. Jefferson proposes a “bargain” that will result in the acquisition of the Louisiana Territory. In a confidential message to Congress, Jefferson seeks $2,500 to send a small party of men to explore the Missouri River. Congress concurs, and Jefferson’s secretary Meriwether Lewis will lead the expedition. Settling the boundaries with Native American lands is a major theme of the volume. In reality, “settling” results in major cessions of Indian lands to the American government. During the months of this volume Jefferson never leaves the capital, even for a brief sojourn at Monticello. He does, however, enjoy a visit of six weeks from his daughters and two of his grandchildren. They participate in Washington society, capture the affection of Margaret Bayard Smith, and brighten Jefferson’s days.