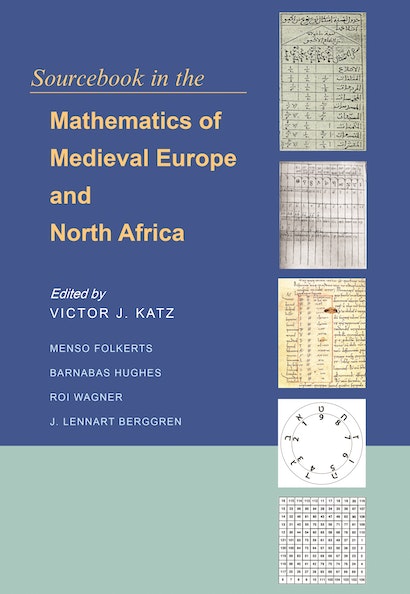 Medieval Europe was a meeting place for the Christian, Jewish, and Islamic civilizations, and the fertile intellectual exchange of these cultures can be seen in the mathematical developments of the time. This sourcebook presents original Latin, Hebrew, and Arabic sources of medieval mathematics, and shows their cross-cultural influences. Most of the Hebrew and Arabic sources appear here in translation for the first time.

The Sourcebook in the Mathematics of Medieval Europe and North Africa will be indispensable to anyone seeking out the important historical sources of premodern mathematics.

"An equal to its companion volume, The Mathematics of Egypt, Mesopotamia, China, India, and Islam: A Sourcebook this scholarly effort fills a noticeable void. . . . Any individual who enjoys mathematics will learn a great amount about mathematical history in a context that is often not discussed or covered."—Choice

"[A] very deep and detailed dive into the mathematics of the medieval era."—Charles Ashbacher, MAA Reviews

"This beautifully produced reference work offers translations of mathematical works from Latin, Hebrew and Arabic sources. Written in three main sections (plus explanatory Appendices and a Timeline at the end) it is a mine of information of early mathematical work . . . . This fine book is a signal contribution to mathematics. . . . It makes original texts accessible and will enable us to delve into the ancient past and allow us better to appreciate how ideas, now refined, involved a great deal of struggle by our antecedents."—Tony Crilly, Mathematical Gazette

"There is no denying that great mathematical progress was made in Europe in the sixteenth and seventeenth centuries. The primary sources in this book show how mathematics developed in medieval Europe to the stage where such progress became possible. The editors do a good job of explaining mathematical ideas of the time to modern readers while still leaving the extracts to speak for themselves."—John Hannah, University of Canterbury, New Zealand

"This sourcebook collects in one place and brings to light in English many valuable and interesting sources on mathematics from the Middle Ages in Europe and North Africa. A significant contribution to the field, it allows scholars and students to consult primary sources that have been translated into English and thoughtfully footnoted."—Sloan Despeaux, Western Carolina University

"This carefully crafted anthology consists primarily of excerpts from diverse historical sources in premodern mathematics. It will be a revelation to readers and abundantly testifies not only to the richness and depth of medieval Western mathematical sciences, but also to the complex interconnections of the different textual traditions that maintained them."—Kim Plofker, author of Mathematics in India

"This book provides the reader with English translations of key mathematical texts from medieval Western Europe and North Africa, all originally written in one of the three scientific languages of that time: Latin, Hebrew, and Arabic. Until now, there has been no sourcebook that deals with Hebrew mathematics as such, or the mathematics of the Muslim West. This volume fills that gap and brings the field an important step forward."—Pascal Crozet, Université Paris Diderot