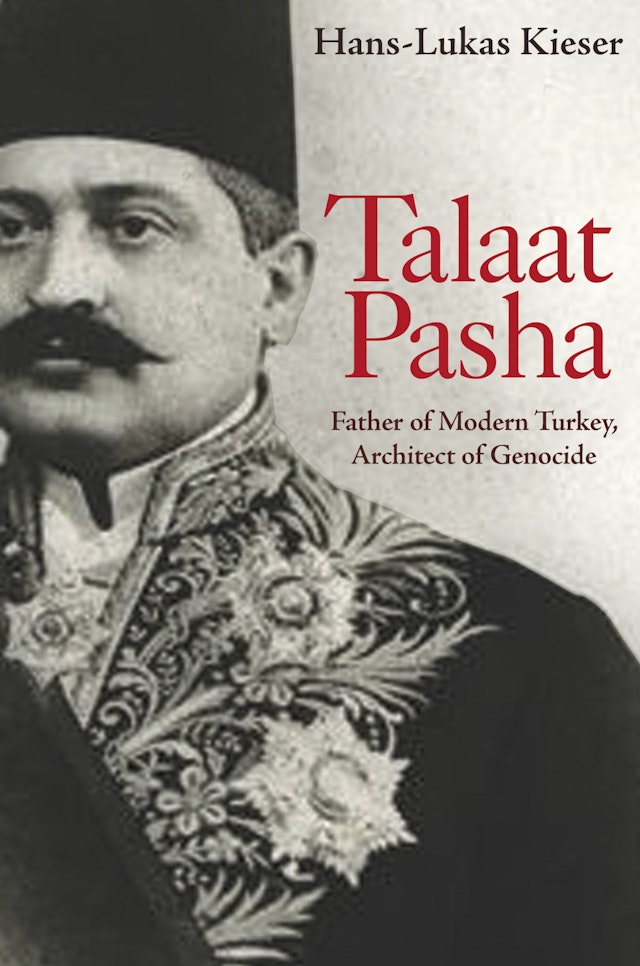 Talaat Pasha (1874–1921) led the triumvirate that ruled the late Ottoman Empire during World War I and is arguably the father of modern Turkey. He was also the architect of the Armenian Genocide, which would result in the systematic extermination of more than a million people, and which set the stage for a century that would witness atrocities on a scale never imagined. Here is the first biography in English of the revolutionary figure who not only prepared the way for Atatürk and the founding of the republic in 1923, but who shaped the modern world as well.

In this explosive book, Hans-Lukas Kieser provides a mesmerizing portrait of a man who maintained power through a potent blend of the new Turkish ethno-nationalism, the political Islam of former Sultan Abdulhamid II, and a readiness to employ radical “solutions” and violence. From Talaat’s role in the Young Turk Revolution of 1908 to his exile from Turkey and assassination — a sensation in Weimar Germany—Kieser restores the Ottoman drama to the heart of world events. He shows how Talaat wielded far more power than previously realized, making him the de facto ruler of the empire. He brings wartime Istanbul vividly to life as a thriving diplomatic hub, and reveals how Talaat’s cataclysmic actions would reverberate across the twentieth century.

In this major work of scholarship, Kieser tells the story of the brilliant and merciless politician who stood at the twilight of empire and the dawn of the age of genocide.

Hans-Lukas Kieser is associate professor in the School of Humanities and Social Science at the University of Newcastle in Australia and adjunct professor of history at the University of Zurich in Switzerland. His many books include Nearest East: American Millennialism and Mission to the Middle East, World War I and the End of the Ottomans: From the Balkan Wars to the Armenian Genocide, and Turkey beyond Nationalism.

"His book is invaluable, offering a bigger picture than Akçam’s, both of the events that prefigured the massacres of 1915–1917 and of the war. The view from Talaat Pasha’s desk gives a perspective that would be hard to beat."—Mark Mazower, New York Review of Books

"This brilliant portrait of Talaat Pasha is in a league of its own. . . . This detailed, well-researched account of his life re-establishes Talaat Pasha as a key figure during the first decades of the 20th Century."—Lisa Kaaki, Arab News

"This is an extremely important book that not only fills a large gap in the existing scholarship but also introduces new perspectives on the Armenian Genocide. It is a must-read for anyone who wishes to understand late Ottoman history and the Committee of Union and Progress, which organized the genocide against the Christians during First World War."—Taner Akçam, author of A Shameful Act: The Armenian Genocide and the Question of Turkish Responsibility

"A highly valuable model of the use of biography in the service of history and the social sciences. Kieser's careful reading of the Armenian Genocide offers precious keys to understanding the process of the Islamization and Turkification of the late Ottoman Empire."—Hamit Bozarslan, author of Violence in the Middle East: From Political Struggle to Self-Sacrifice

"This long-awaited biography is very timely and masterfully executed. Kieser reinstates Talaat Pasha as a major statesman of twentieth-century European and world history."—Stefan Ihrig, author of Justifying Genocide: Germany and the Armenians from Bismarck to Hitler

"In this brilliant book, Kieser moves the architect of Ottoman imperial nationalism and the Armenian Genocide to center stage in the European drama. This is the first scholarly biography of a man both revered by the beneficiaries and reviled by the victims of his drive to save an empire, only to preside over its demise."—Ronald Grigor Suny, author of "They Can Live in the Desert but Nowhere Else": A History of the Armenian Genocide