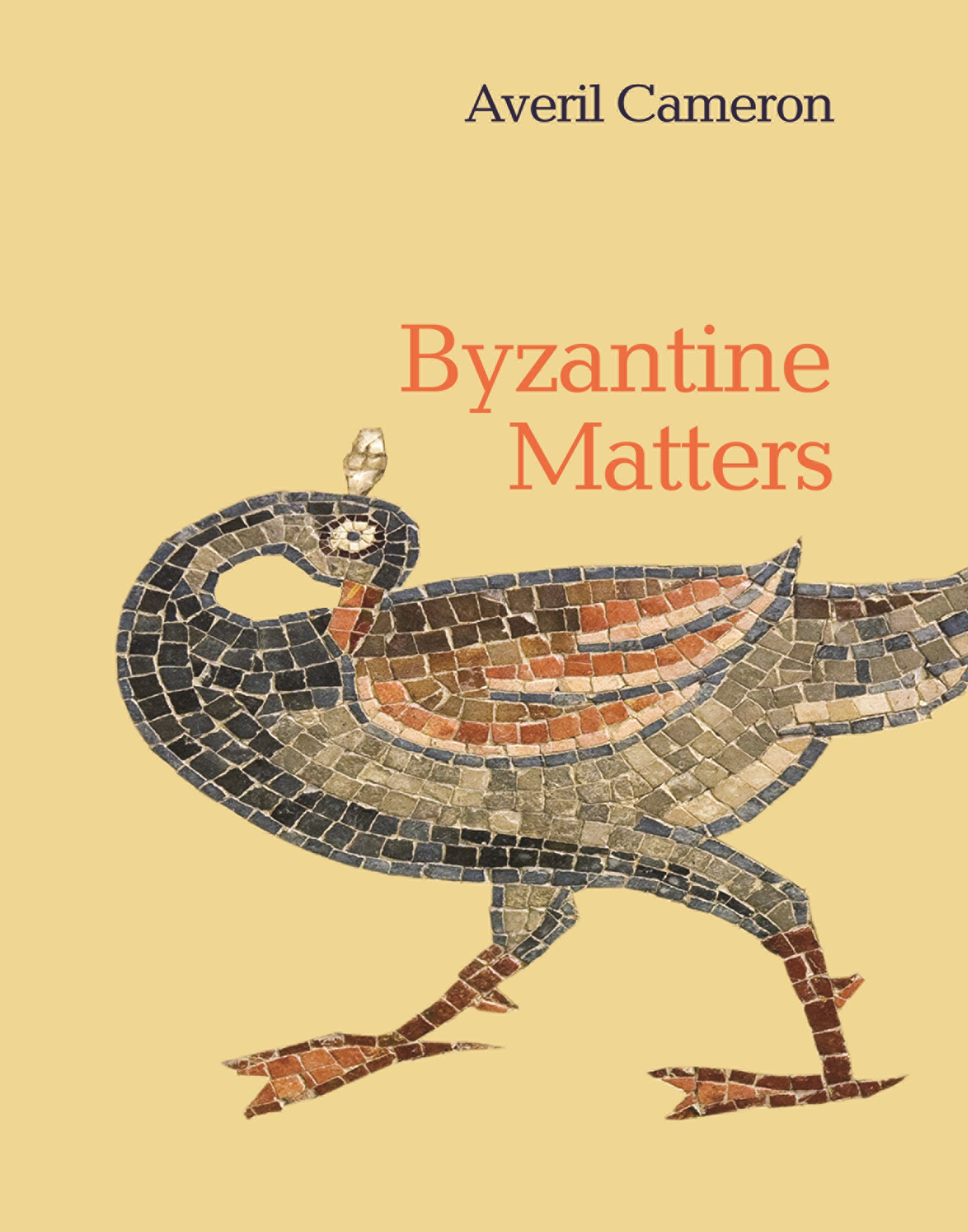 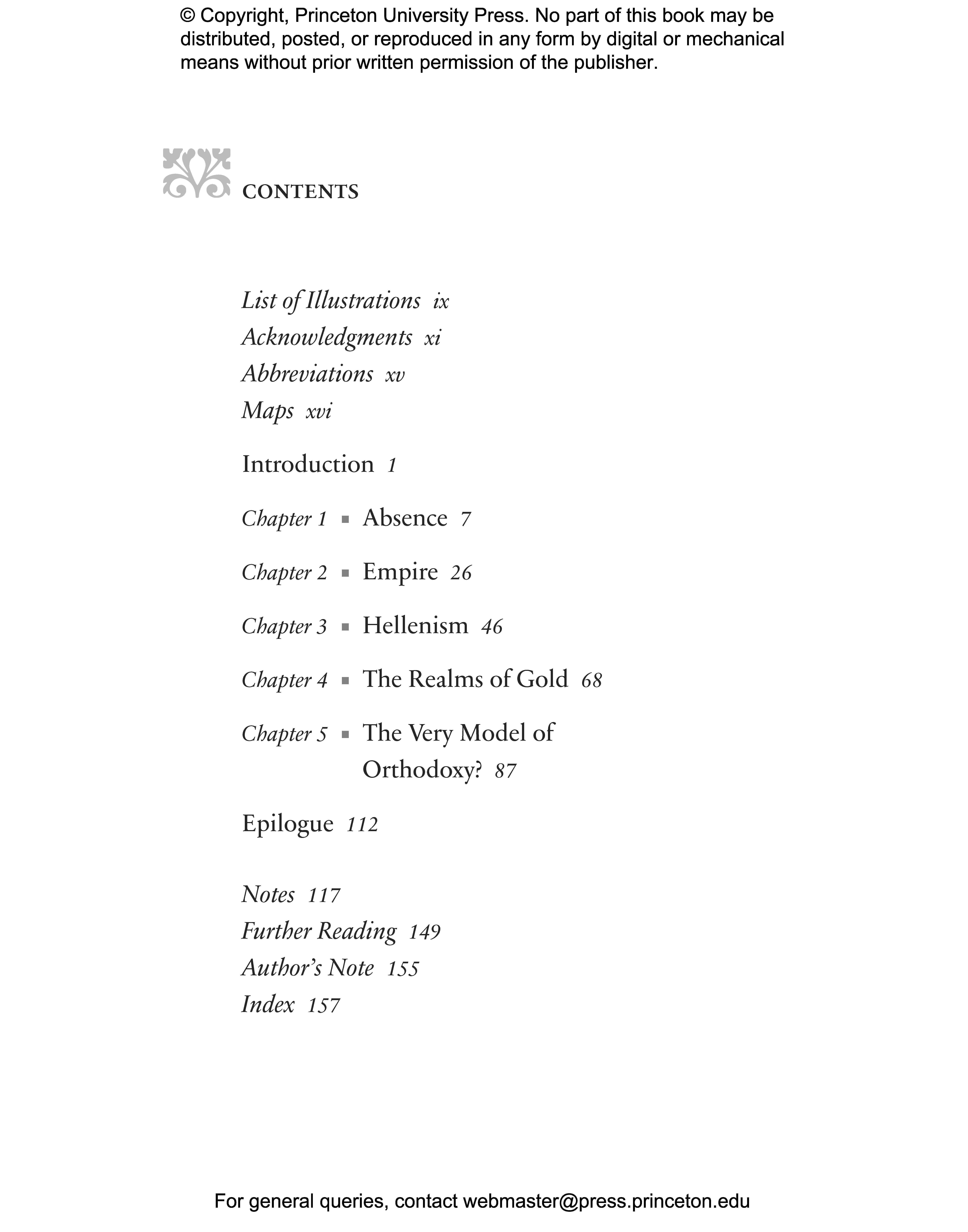 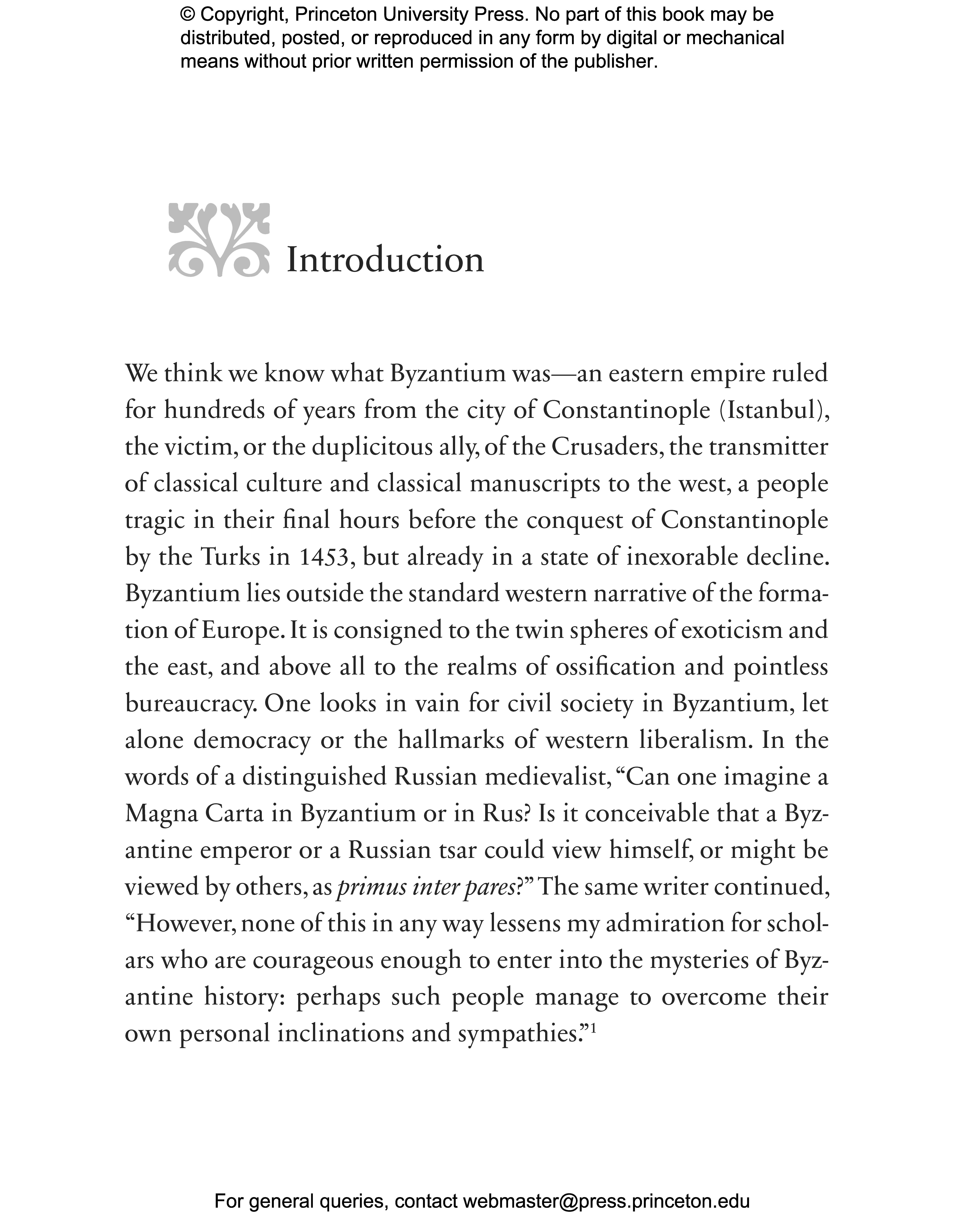 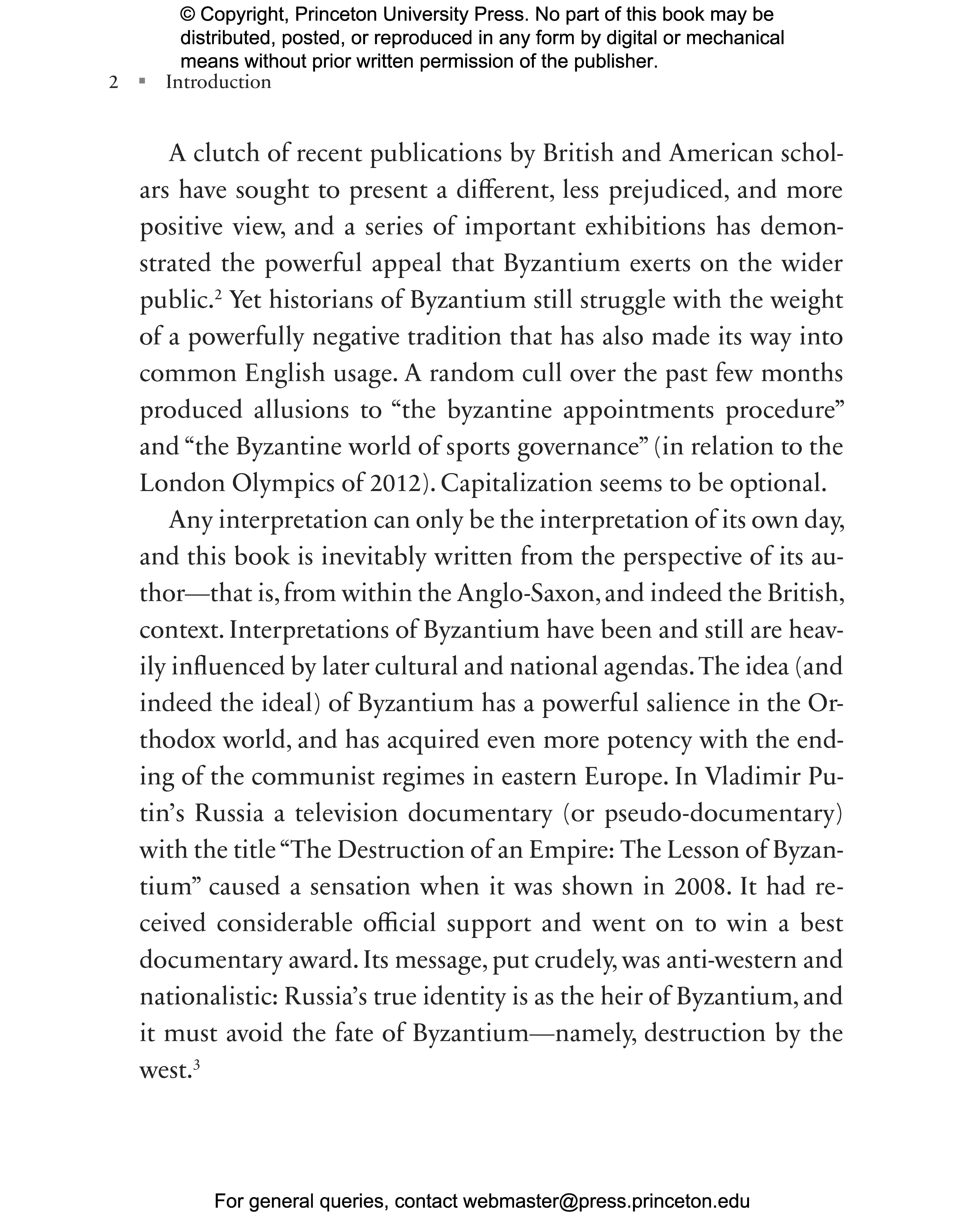 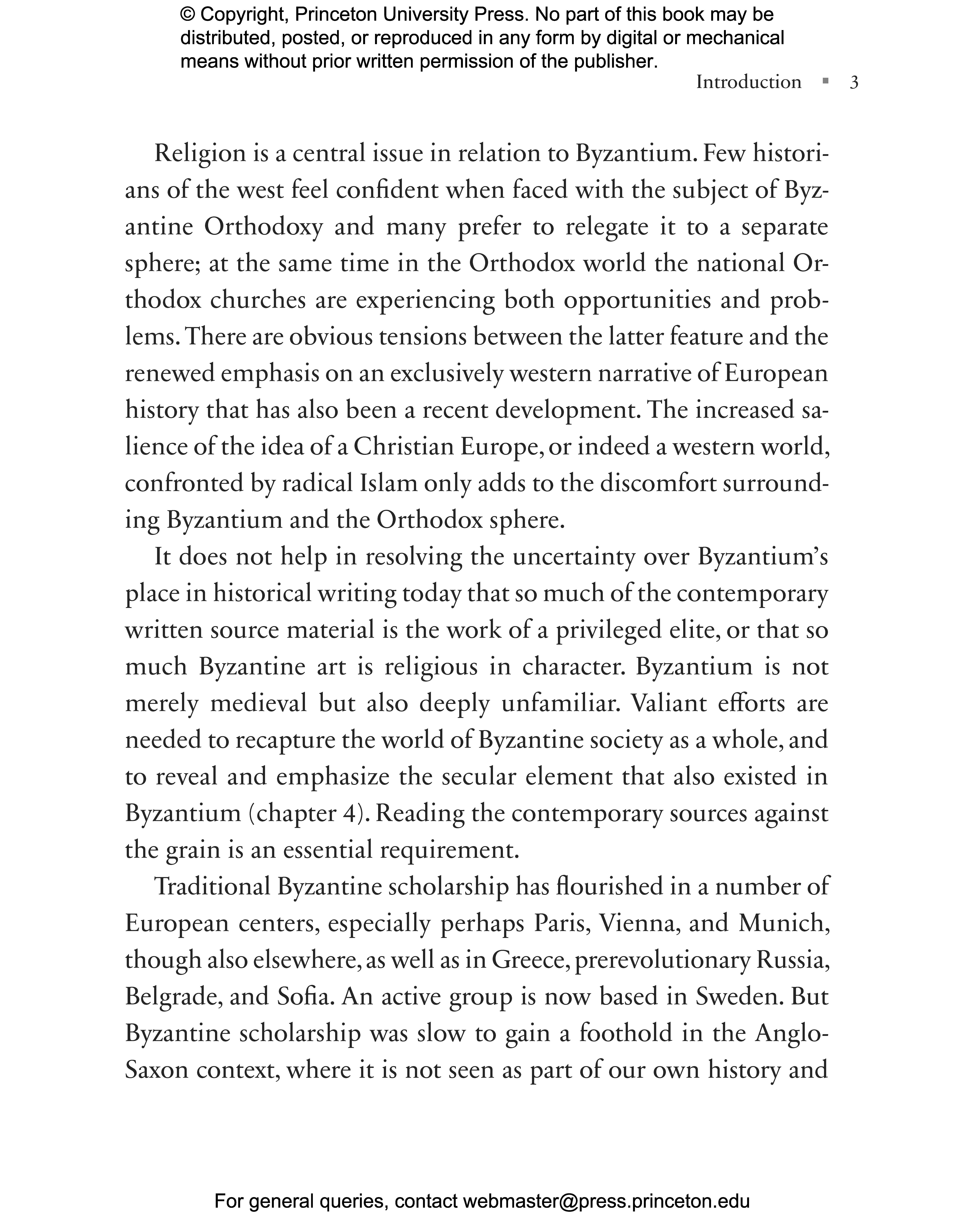 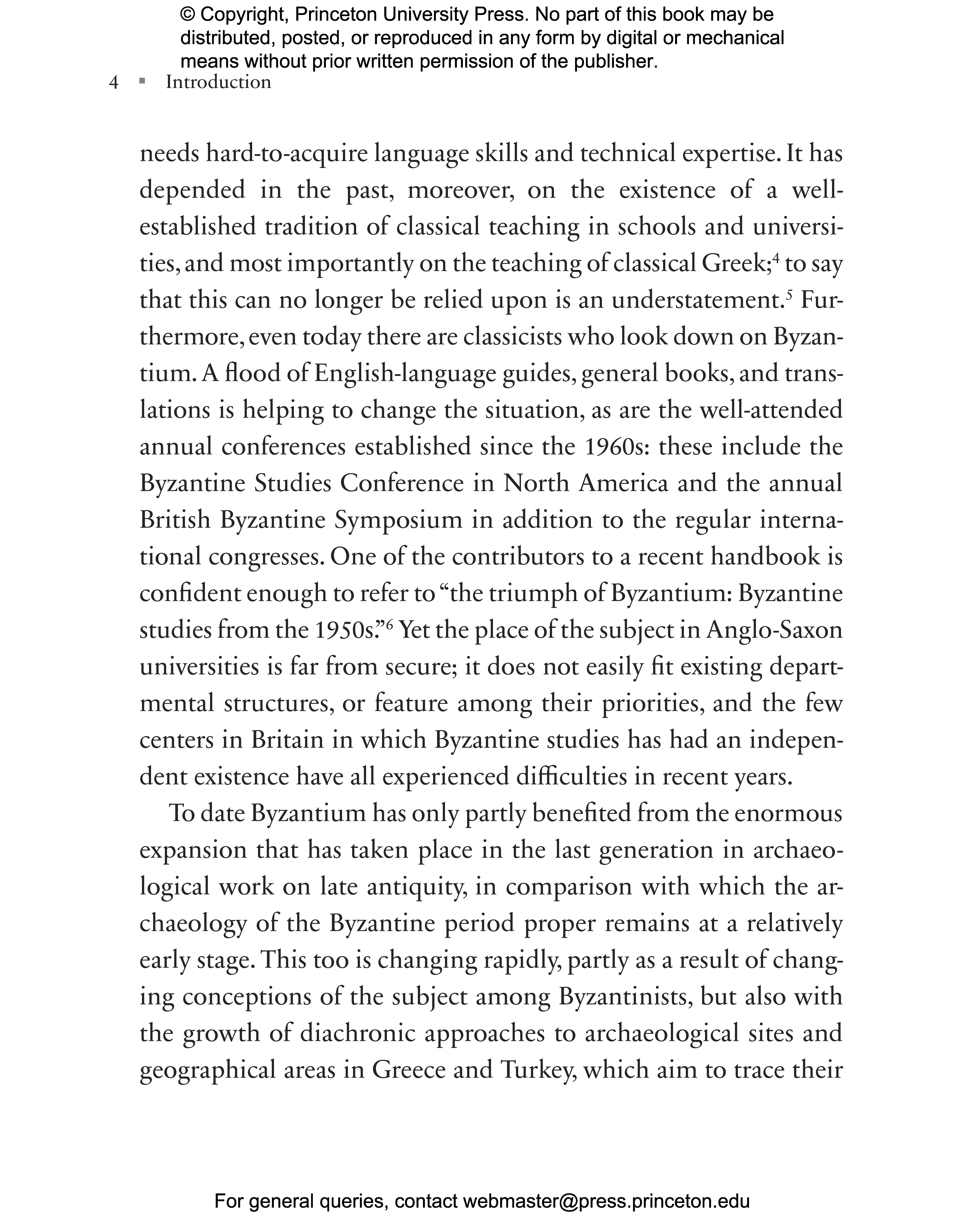 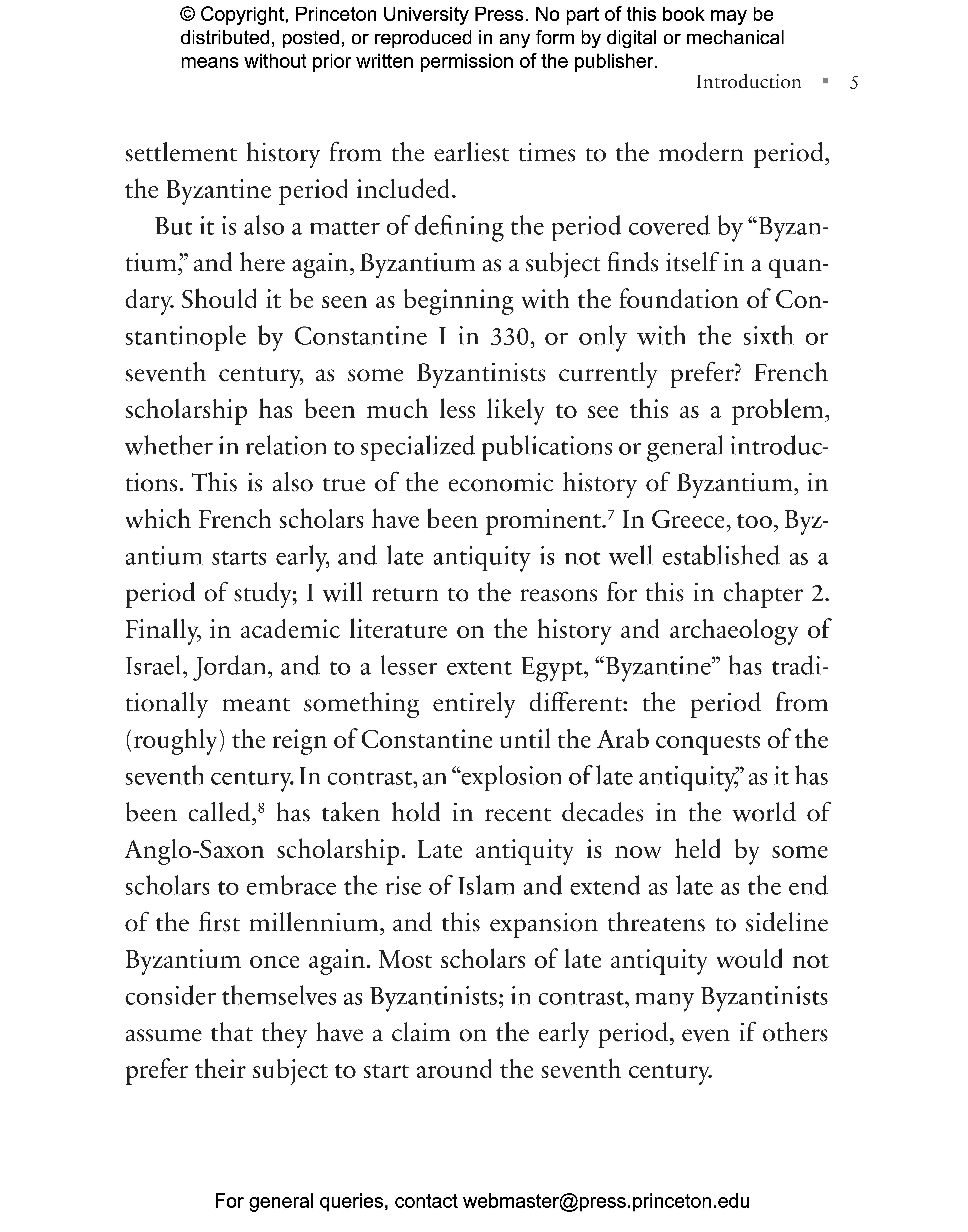 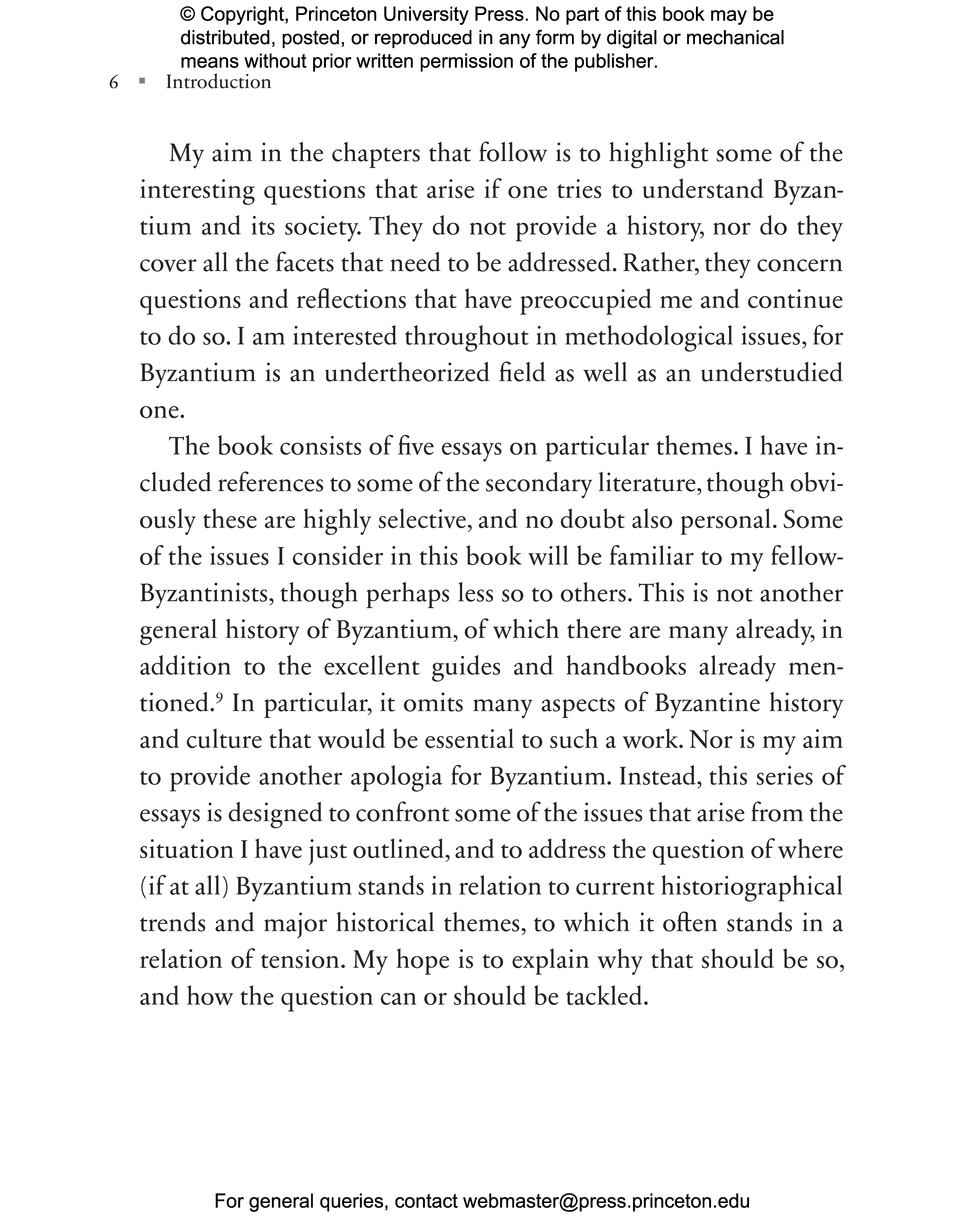 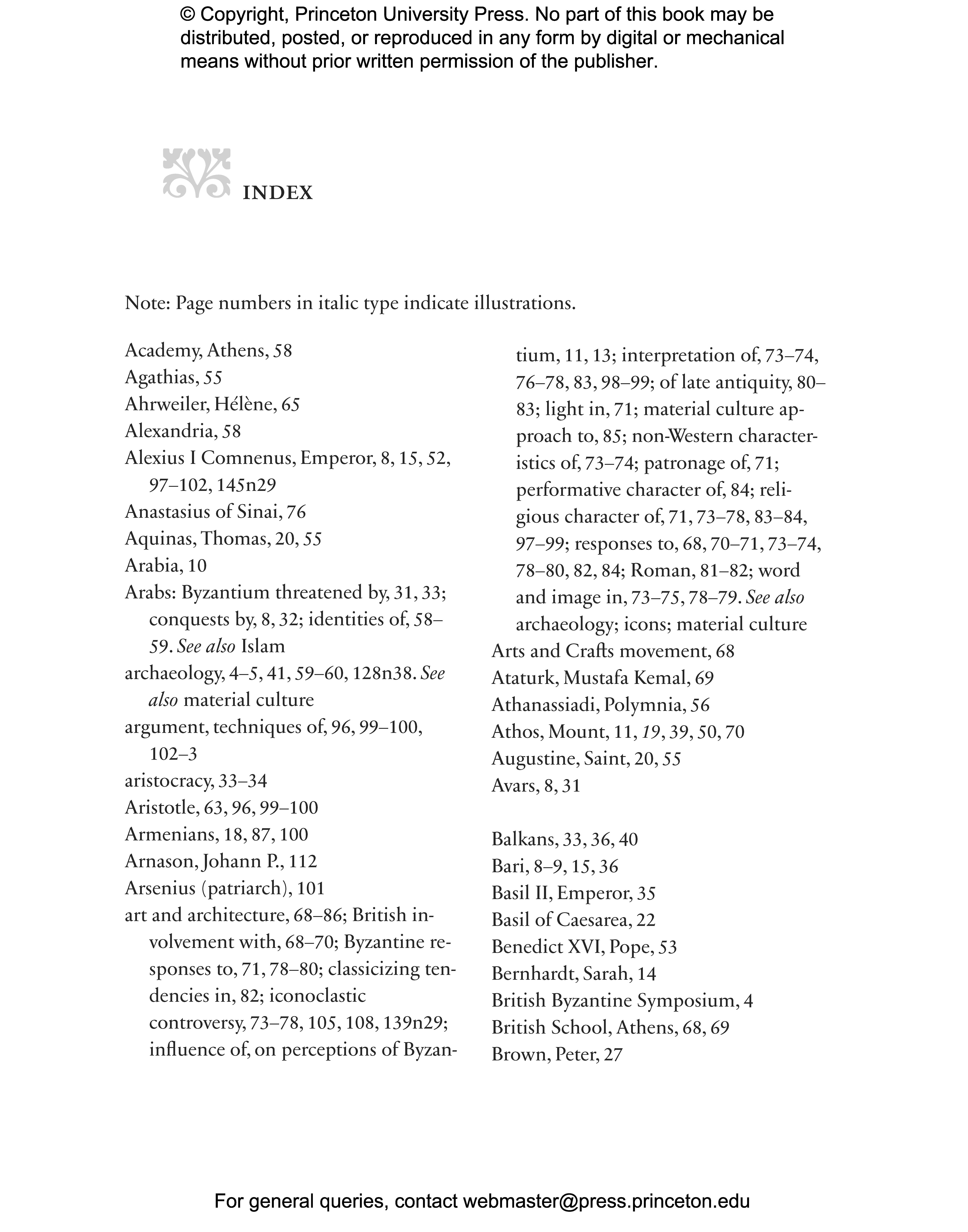 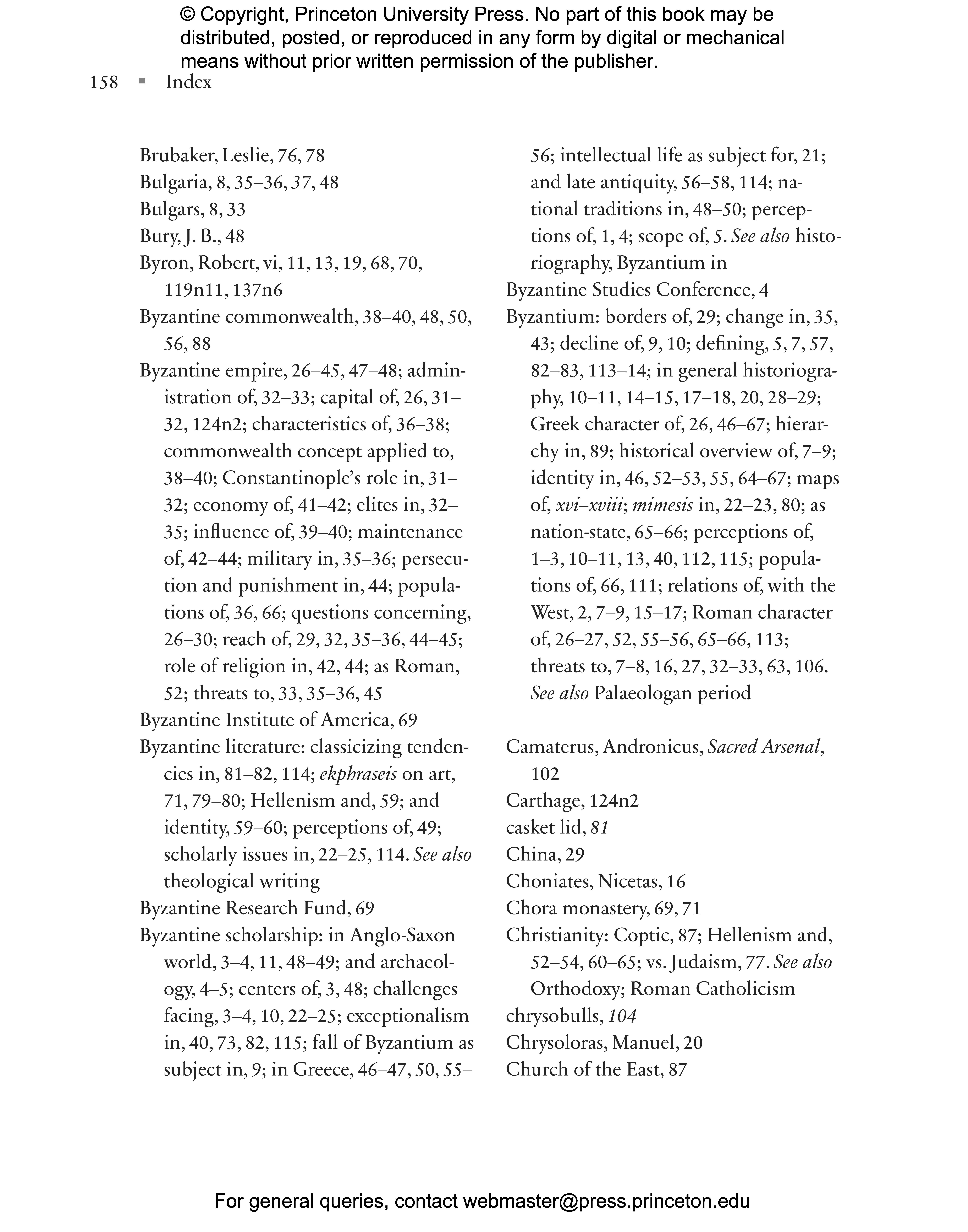 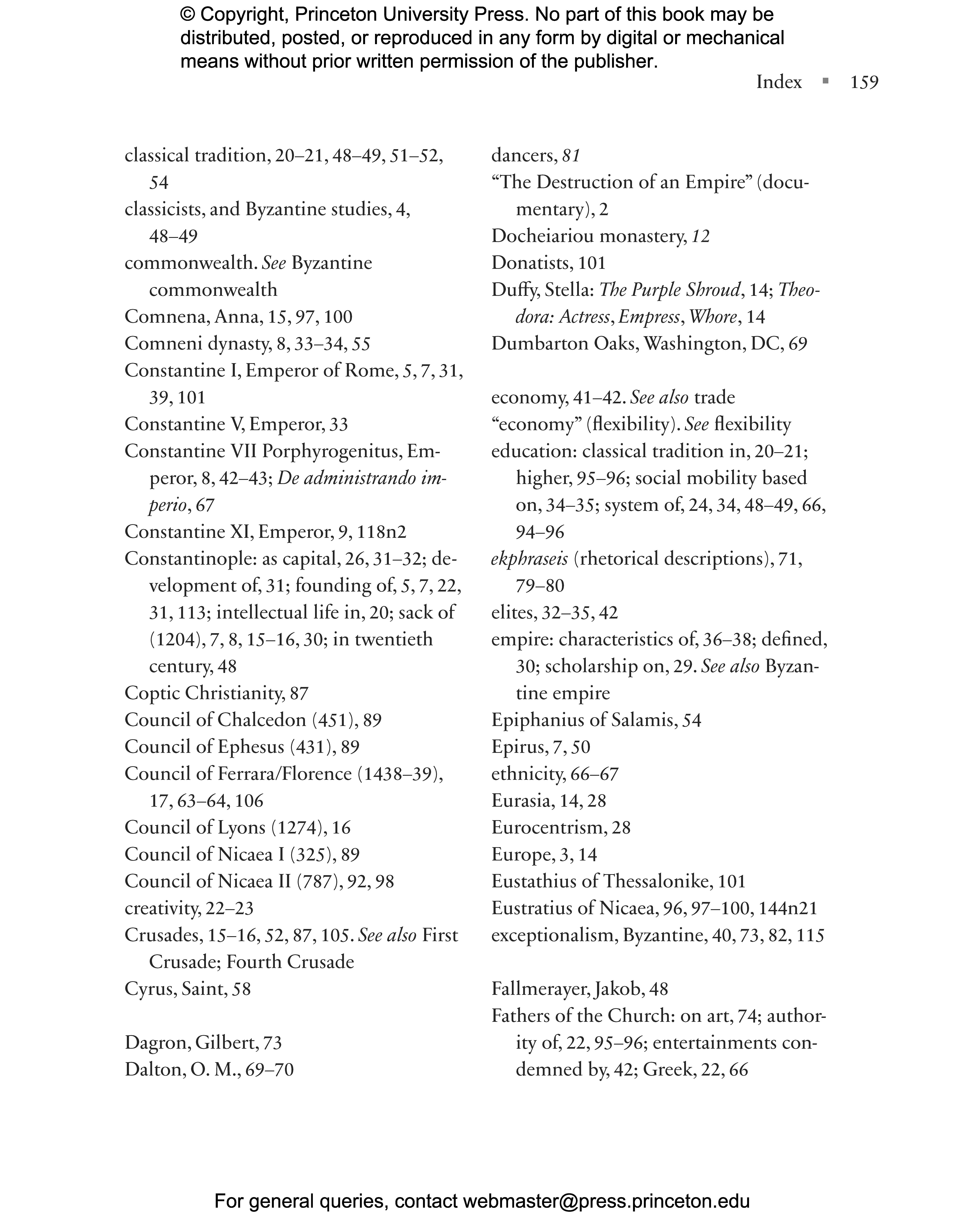 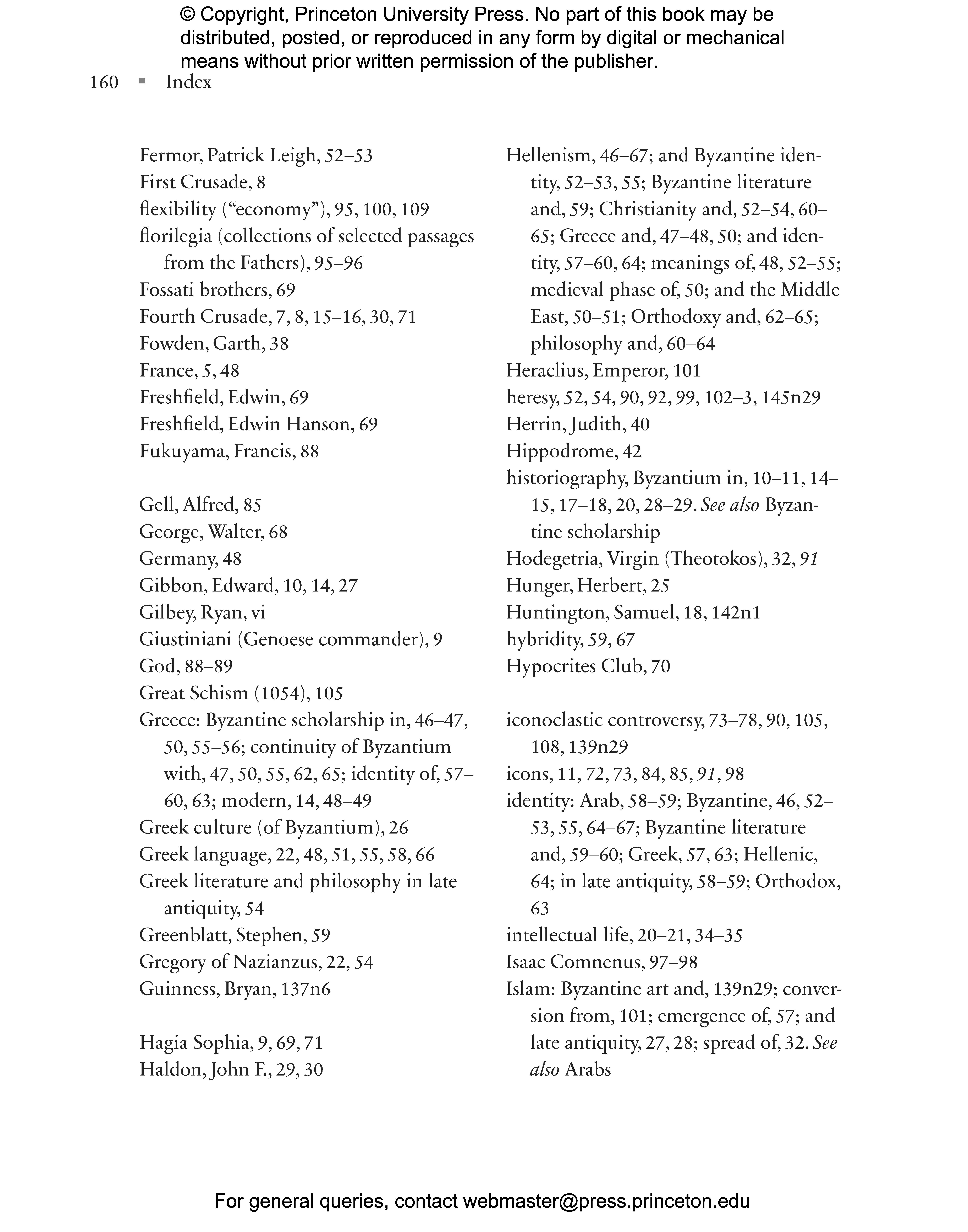 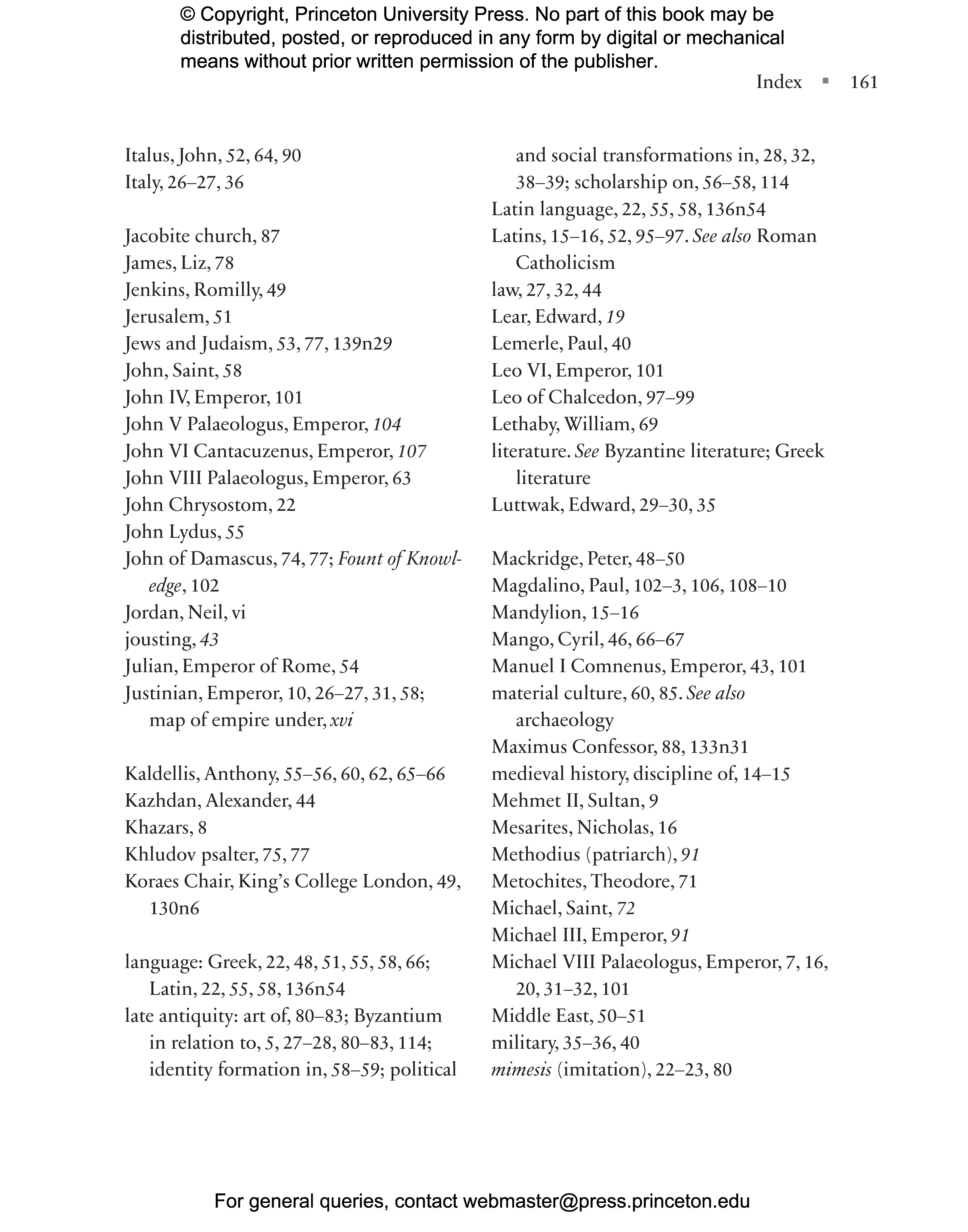 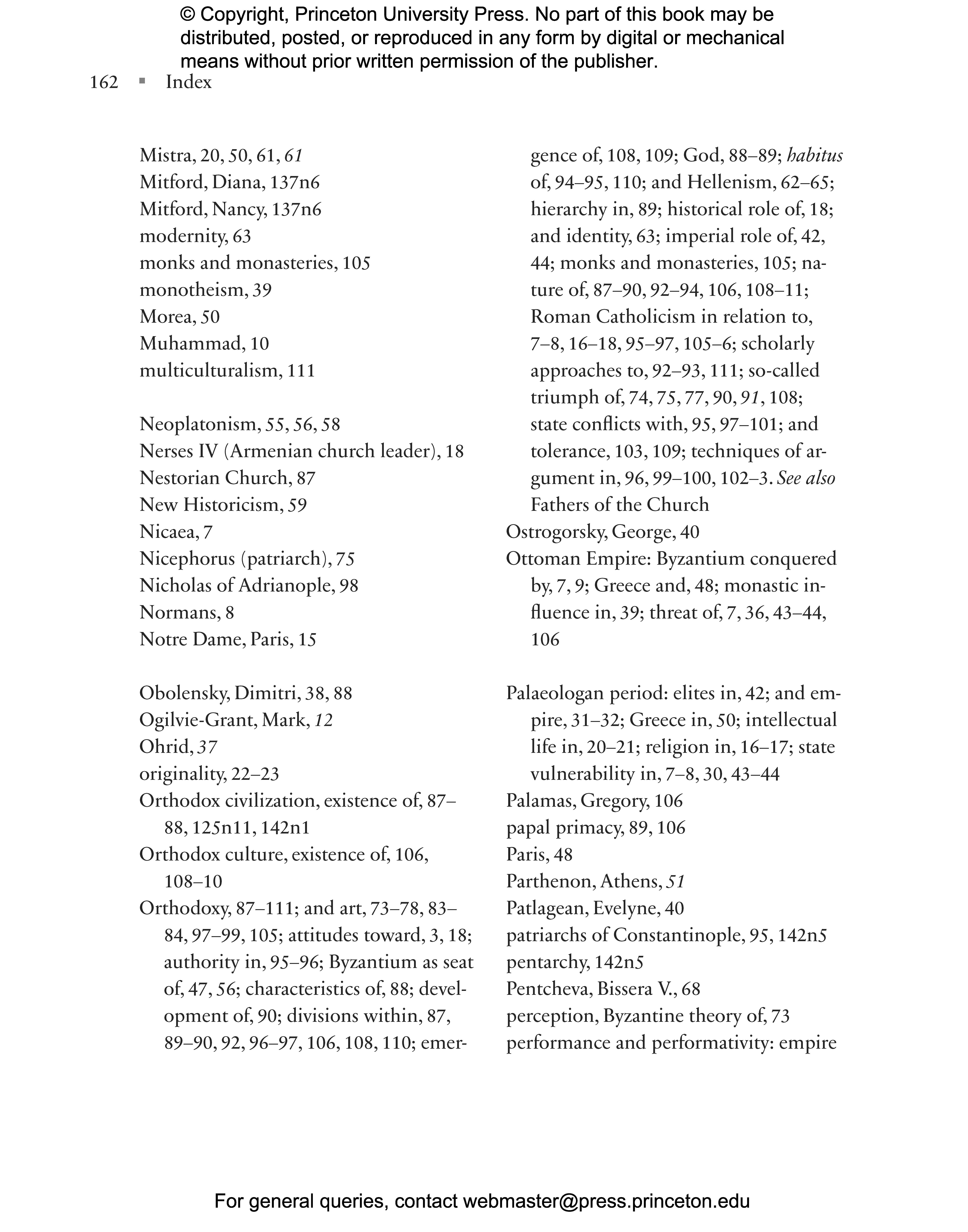 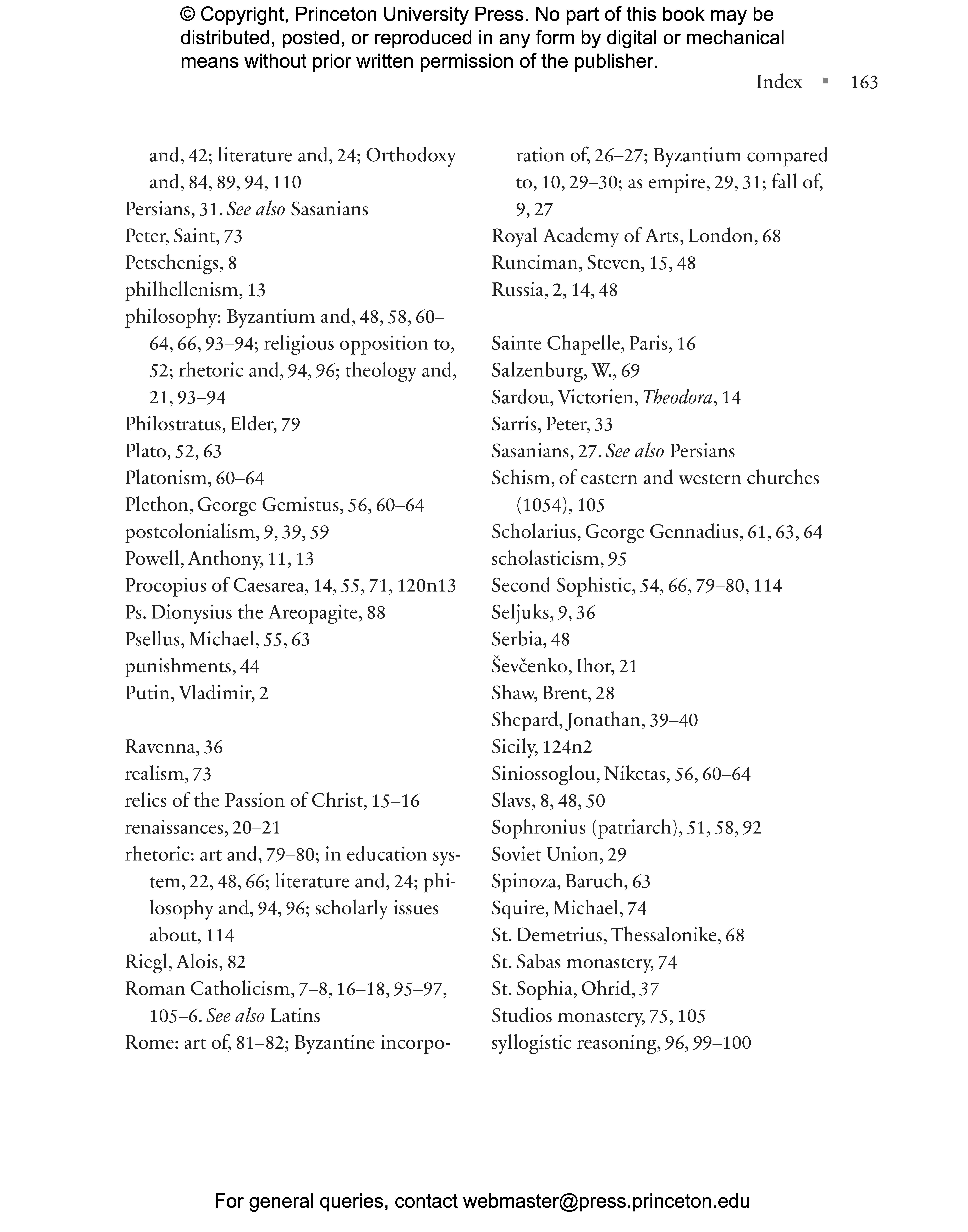 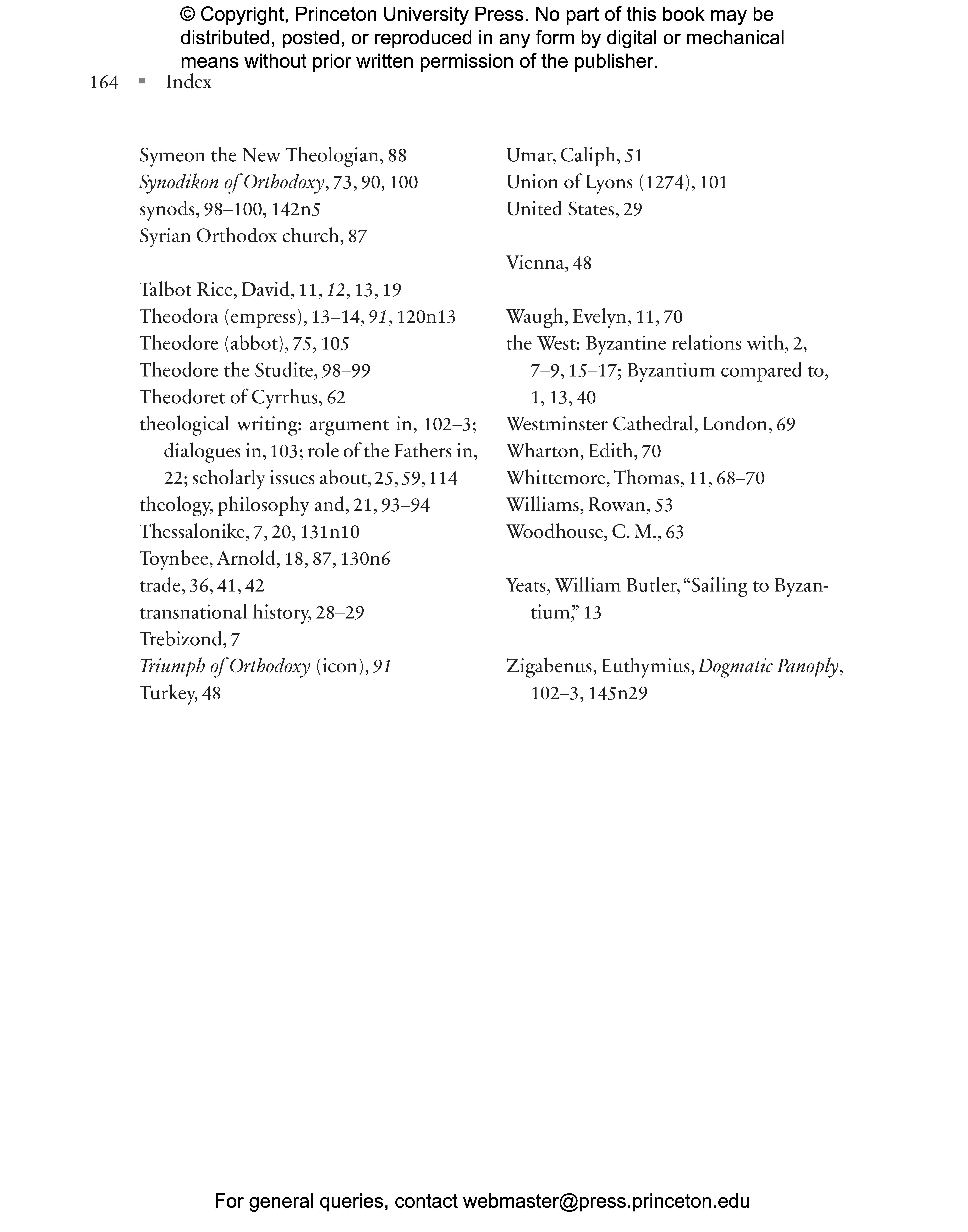 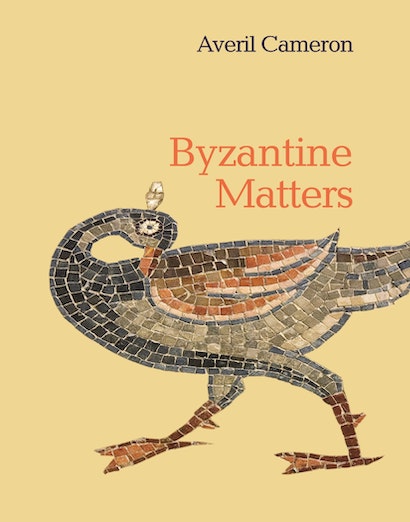 For many of us, Byzantium remains “byzantine”—obscure, marginal, difficult. Despite the efforts of some recent historians, prejudices still deform popular and scholarly understanding of the Byzantine civilization, often reducing it to a poor relation of Rome and the rest of the classical world. In this book, renowned historian Averil Cameron presents an original and personal view of the challenges and questions facing historians of Byzantium today.

The book explores five major themes, all subjects of controversy. “Absence” asks why Byzantium is routinely passed over, ignored, or relegated to a sphere of its own. “Empire” reinserts Byzantium into modern debates about empire, and discusses the nature of its system and its remarkable longevity. “Hellenism” confronts the question of the “Greekness” of Byzantium, and of the place of Byzantium in modern Greek consciousness. “The Realms of Gold” asks what lessons can be drawn from Byzantine visual art, and “The Very Model of Orthodoxy” challenges existing views of Byzantine Christianity.

Throughout, the book addresses misconceptions about Byzantium, suggests why it is so important to integrate the civilization into wider histories, and lays out why Byzantium should be central to ongoing debates about the relationships between West and East, Christianity and Islam, Catholicism and Eastern Orthodoxy, and the ancient and medieval periods. The result is a forthright and compelling call to reconsider the place of Byzantium in Western history and imagination.

Averil Cameron is professor emeritus of late antique and Byzantine history at the University of Oxford and former warden of Keble College, Oxford. Her books include The Mediterranean World in Late Antiquity, The Byzantines, and The Later Roman Empire. 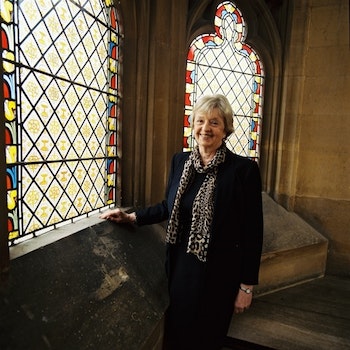 "Byzantine Matters is a fighting book. It may well be that the title was chosen to echo Cornel West's Race Matters. In a more restrained and academic vein than West—but with no less tenacity—Cameron points to an injustice: the absence of Byzantium from the historical consciousness of Western Europe. . . . Seen from the mean streets of university and state policies in the United Kingdom, Cameron's book makes depressing reading. But seen as a program for Byzantine studies in themselves, it is a crackling description of an intellectual trajectory."—Peter Brown, New York Review of Books

"This is a robust, insider critique of the field by an important and highly influential scholar with a formidable international reputation. . . . Four elegant chapters, dealing in turn with empire, identity, visual culture and religion, demonstrate with clarity and economy the extent to which too much recent work on Byzantium continues to wall itself off from new lines of inquiry. . . . Cameron's feisty and provocative manifesto should immediately be placed under every Byzantinist's pillow."—Christopher Kelly, Times Literary Supplement

"This is a must-read for anyone studying Byzantium. . . . [I]t will be very useful to students and enthusiasts of the empire, as well as medievalists and late antiquarians."—Library Journal

"Byzantine Matters is a deceptively small and slight volume in appearance, but it is a book on a mission. Taking five interlocking themes, it sets out to do nothing less than make its readers realise why Byzantium is not something long ago and far away but something that should matter to us all. . . . I, for one, as a feminist scholar working on Byzantine women, have gained and learnt a huge amount from her and her work."—Liz James, Anglo-Hellenic Review

"Cameron makes her case, as one would expect, with eloquence, insight, erudition and power. There is a great deal in what she argues."—Peter N. Bell, Acta Classica

"I found the subject fascinating and Professor Cameron's arguments most persuasive. It has certainly inspired me to investigate the subject and to try to read some of the introductory texts recommended by her."—Rosemary Conely, Open History

"Not everyone will agree with the judgments in this brief but stimulating book, but it provides perfect reading for societies, programs, and departments seeking to join the conversation about Byzantine matters."—Derek Krueger, Project Muse

"It is a book about academics for academics, and valuable for the huge range of up-to-the minute secondary literature that the author takes on board."—Paul Magdalino, Speculum

"This little book provides much to reflect and ponder on. It is an impassioned manifesto aimed at the field (pointing to future research directions) but also beyond, a cry for Byzantium to be better understood and appreciated."—Shaun Tougher, Histos

"It is that rare gem, a profoundly learned book that may be read by the interested amateur in an evening."—Benjamin Garstad, Sixteenth Century Journal

"Cameron's book is a welcome contribution, offering a stimulus for further discussion on the future of Byzantine Studies."—Gerasimos Merianos, Al-Masaq

"Tackling some of the most controversial issues posed by the millennial history of Byzantium, Averil Cameron boldly confronts questions of identity, ethnicity, and continuity of language and religious practice, as well as notoriously difficult topics such as Hellenism and Orthodoxy. Through a comparative analysis of interpretations and cultural attitudes, she demonstrates both the indisputable significance of Byzantium in the medieval world and its continuing importance today."—Judith Herrin, author of Margins and Metropolis and Unrivalled Influence

"In this brilliant and remarkably refreshing book, one of the most distinguished living Byzantinists describes what has changed and what still needs to change in our approach to Byzantium. Personal, direct, and written with extraordinary acuity, Byzantine Matters will be essential reading for all those interested in the future of classical, medieval, and Byzantine studies."—Peter Sarris, author of Empires of Faith: The Fall of Rome to the Rise of Islam, 500-700

"This is a wonderful sequence of reflections from a sophisticated scholar."—Paul Stephenson, author of Constantine: Roman Emperor, Christian Victor