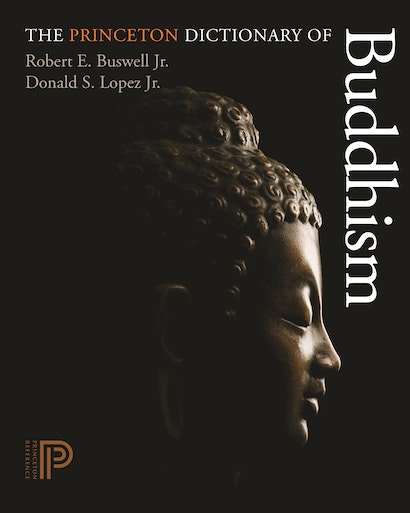 With more than 5,000 entries totaling over a million words, this is the most comprehensive and authoritative dictionary of Buddhism ever produced in English. It is also the first to cover terms from all of the canonical Buddhist languages and traditions: Sanskrit, Pali, Tibetan, Chinese, Japanese, and Korean. Unlike reference works that focus on a single Buddhist language or school, The Princeton Dictionary of Buddhism bridges the major Buddhist traditions to provide encyclopedic coverage of the most important terms, concepts, texts, authors, deities, schools, monasteries, and geographical sites from across the history of Buddhism. The main entries offer both a brief definition and a substantial short essay on the broader meaning and significance of the term covered. Extensive cross-references allow readers to find related terms and concepts. An appendix of Buddhist lists (for example, the four noble truths and the thirty-two marks of the Buddha), a timeline, six maps, and two diagrams are also included.

Written and edited by two of today’s most eminent scholars of Buddhism, and more than a decade in the making, this landmark work is an essential reference for every student, scholar, or practitioner of Buddhism and for anyone else interested in Asian religion, history, or philosophy.

Robert E. Buswell Jr. holds the Irving and Jean Stone Endowed Chair in Humanities at the University of California, Los Angeles, where he is also Distinguished Professor of Buddhist Studies and founding director of the Center for Buddhist Studies. He is the editor-in-chief of the two-volume Encyclopedia of Buddhism and the author of The Zen Monastic Experience (Princeton), among many other books. Donald S. Lopez Jr. is the Arthur E. Link Distinguished University Professor of Buddhist and Tibetan Studies at the University of Michigan. He is the author of The Tibetan Book of the Dead: A Biography and the editor of Buddhism in Practice (both Princeton), among many other books.

"Buddhism's ancient history and depth of culture are reflective in this volume's extensiveness. . . . Owing to the length and breadth of this volume, this will supersede previously published titles such as Damien Keown's Oxford Dictionary of Buddhism."—Ray Arnett, Library Journal

"One of the take-a ways is how we're just scratching the surface on what we have translated into English. I almost regret the decision I made about 25 years ago not to shift my focus from training to learning languages so I could be a Buddhist scholar. Particularly, I was struck by how little I know about the Korean tradition! Except for Buswell's work, there's still very little translated into English, as far as I know."—Dosho Port, Wild Fox Zen

"As the most comprehensive collection of discrete Buddhist terms available, this resource is an outstanding addition to available reference sources. . . . Highly recommended for theological, academic, and large public libraries."—Christopher McConnell, Booklist

"[T]he dictionary includes an impressive set of reference tools. . . . Much more than a compilation of the philosophies of elite Buddhist figures, the Dictionary deepens our understanding of local traditions and their unique approaches to Buddhist practice, offering glimpses into the many Buddhisms and Buddhist belief systems that have developed over the past two and a half millennia. Both professional and amateur scholars will want to keep The Princeton Dictionary of Buddhism within easy reach."—Rory Lindsay, Buddhadharma

"This encyclopedic dictionary by Buswell and Lopez likely will become an essential resource for students and scholars of Buddhism. It has over 5,000 entries varying in length from a paragraph to a full page."—Choice

"This Dictionary of Buddhism . . . deserves recognition as a highly useful and worthwhile contribution to the field. Its breadth of coverage and its clear and convenient style of presentation make it a valuable reference source for researchers, teachers, and students in Buddhist Studies, and for more general readers as well."—Choong Mun-keat, Reviews of Books

"This is a one-of-a-kind reference book that will not be replicated in this generation's lifetime."—Brad Lee Eden, Reference Reviews

"The Princeton Dictionary of Buddhism is a huge contribution to the field of Buddhist studies in English. . . . The ease with which concepts can be searched and connected, the ambitious scope, accessible writing style, and detailed scholarship combine to make this single volume dictionary an invaluable reference tool for scholars, students, and practitioners of Buddhism."—Leesa S. Davis, Sophia

"Thoroughly enjoyable to anyone who wants to know anything and everything about Buddhism. . . . The Dictionary offers a sense of completeness and comprehensiveness in understanding taxonomies and terminologies used in Buddhism."—Anup Kumar Das, International Institute for Asian Studies Newsletter

"This is without a doubt the most comprehensive, authoritative, and useful dictionary of Buddhism that there is. In reading it, I learned more about my field, in a serendipitous way, than I have from any other single book."—John S. Strong, Bates College

"This will become the new standard reference in the field. Every scholar and graduate student in Buddhist studies will want a copy, as will every college instructor assigned to teach an introduction to Buddhism course. I wish I had had a work like this when I first began teaching. This is a truly monumental contribution to the field."—Lori Meeks, University of Southern California