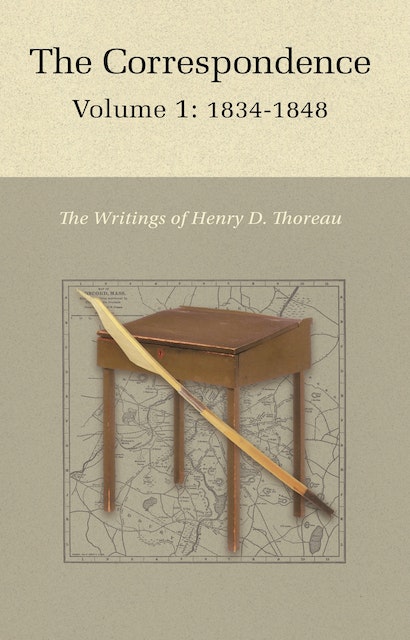 This is the inaugural volume in the first full-scale scholarly edition of Thoreau’s correspondence in more than half a century. When completed, the edition’s three volumes will include every extant letter written or received by Thoreau — in all, almost 650 letters, roughly 150 more than in any previous edition, including dozens that have never before been published.

Correspondence 1 contains 163 letters, ninety-six written by Thoreau and sixty-seven to him. Twenty-five are collected here for the first time; of those, fourteen have never before been published. These letters provide an intimate view of Thoreau’s path from college student to published author. At the beginning of the volume, Thoreau is a Harvard sophomore; by the end, some of his essays and poems have appeared in periodicals and he is at work on A Week on the Concord and Merrimack Rivers and Walden. The early part of the volume documents Thoreau’s friendships with college classmates and his search for work after graduation, while letters to his brother and sisters reveal warm, playful relationships among the siblings. In May 1843, Thoreau moves to Staten Island for eight months to tutor a nephew of Emerson’s. This move results in the richest period of letters in the volume: thirty-two by Thoreau and nineteen to him. From 1846 through 1848, letters about publishing and lecturing provide details about Thoreau’s first years as a professional author. As the volume closes, the most ruminative and philosophical of Thoreau’s epistolary relationships begins, that with Harrison Gray Otis Blake. Thoreau’s longer letters to Blake amount to informal lectures, and in fact Blake invited a small group of friends to readings when these arrived.


Following every letter, annotations identify correspondents, individuals mentioned, and books quoted, cited, or alluded to, and describe events to which the letters refer. A historical introduction characterizes the letters and connects them with the events of Thoreau’s life, a textual introduction lays out the editorial principles and procedures followed, and a general introduction discusses the significance of letter-writing in the mid-nineteenth century and the history of the publication of Thoreau’s letters. Finally, a thorough index provides comprehensive access to the letters and annotations.

Robert N. Hudspeth is Research Professor of English at the Claremont Graduate University and professor emeritus of English at Redlands University. He is the editor of The Letters of Margaret Fuller and the author of Ellery Channing.

"Thoreau's letters unquestionably enlarge understanding of his character. The personality who emerges is not just cold, impassive, and stoic but also witty, playful, and sociable, not just reclusive and idealistic but also engaged and practical."—Choice

"In short, The Correspondence of Henry D. Thoreau is a model of documentary editing. Editors of other authors would do well to follow the example set by Hudspeth and the Princeton edition."—Kevin J. Hayes, New England Quarterly

"The angles of vision opened by Hudspeth's Princeton Correspondence allow us to see Henry Thoreau in richly textured ways we never could have imagined.""—Wesley T. Mott, Resources for American Literary Study