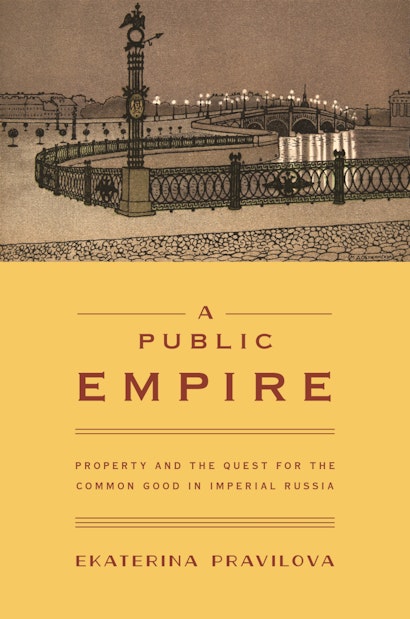 “Property rights” and “Russia” do not usually belong in the same sentence. Rather, our general image of the nation is of insecurity of private ownership and defenselessness in the face of the state. Many scholars have attributed Russia’s long-term development problems to a failure to advance property rights for the modern age and blamed Russian intellectuals for their indifference to the issues of ownership. A Public Empire refutes this widely shared conventional wisdom and analyzes the emergence of Russian property regimes from the time of Catherine the Great through World War I and the revolutions of 1917. Most importantly, A Public Empire shows the emergence of the new practices of owning “public things” in imperial Russia and the attempts of Russian intellectuals to reconcile the security of property with the ideals of the common good.

The book analyzes how the belief that certain objects—rivers, forests, minerals, historical monuments, icons, and Russian literary classics—should accede to some kind of public status developed in Russia in the mid-nineteenth century. Professional experts and liberal politicians advocated for a property reform that aimed at exempting public things from private ownership, while the tsars and the imperial government employed the rhetoric of protecting the sanctity of private property and resisted attempts at its limitation.

Exploring the Russian ways of thinking about property, A Public Empire looks at problems of state reform and the formation of civil society, which, as the book argues, should be rethought as a process of constructing “the public” through the reform of property rights.

Ekaterina Pravilova is associate professor of history at Princeton University.

"Pravilova provides a nuanced analysis of the shifting nature of debates, concepts, and laws concerning public and private property in the Russian Empire from the late 18th century to the revolutions of 1917. . . . Challenging familiar narratives that couple liberalism with the defense of individual private property rights, she provides abundant evidence of a liberal vision that was not exclusively individualistic."—Choice

"Even an extended review cannot do justice to this book's wealth of thought-provoking insights."—Adele Lindenmeyr, Slavic Review

"A short review cannot do justice to this fine, meticulously researched, and well-written book. It is essential reading for all historians of imperial and Soviet Russia."—Michelle Lamarche Marrese, Russian Review

"[An] engrossing study. . . . These questions are meant as tributes to what is clearly a major and agenda-setting work, whose discussion will greatly sharpen our understanding of Russia's past."—John Randolph, American Historical Review

"A lively text that is readily accessible to those with a non-legal history background. This is a rich, ambitious and complex project, which cuts across any number of traditional cultural and political boundaries; Pravilova switches adeptly from irrigation in Central Asia and Transcaucasia, to the preservation of churches in the Russian north, to the public's right to read posthumously published correspondence."—Jennifer Keating, Slavonic and East European Review

"In this extremely erudite and comprehensively researched book, Ekaterina Pravilova argues compellingly that attempts in late imperial Russia to reform property law, and specifically to establish in practice as well as the imagination a domain of ‘public things' (res publica), were central to efforts to transform the tsarist social and political orders. . . . An extremely valuable contribution to our understanding of late imperial Russia."—William G. Wagner, Journal of Modern History

"A short review cannot embrace all the topics that Ekaterina Pravilova's book engages and for which it suggests possibilities for new studies. No doubt this is what makes this book a highly valuable contribution to the so very complicated process of rethinking Russian history."—Alexander Kamenskii, Canadian-American Slavic Studies

"A highly original and essential re-assessment of the role of property rights in Russia during the last days of empire and through the revolution. . . . A short summary cannot do justice to all the insights and scholarly contributions of this book. . . . The book will be mandatory reading for all historians and graduate students, as it refocuses on the possibilities—and limitations—of the tsarist system. Pravilova has identified the crucial nexus between law, property, and change, providing a vivid snapshot of where Imperial Russia stood on the eve of revolution."—William E. Pomeranz, The Soviet and Post-Soviet Review

"Somewhere between state and private property in Russia stood a world of public property, which we knew very little about. In this book, Pravilova fills this gap and shows us why it was so glaring. Pravilova demonstrates that societies can carve out and protect spaces that are quasi-autonomous from the state, and promote a collective existence, a public good, and a public sphere. Not all liberal modernities need be individualistic. A masterful work of research in many archival holdings, countries, and languages, her groundbreaking book changes the debate over Russian property regimes and Russian liberalism."—Yanni Kotsonis, New York University

"An impressive achievement, this distinct book traces the contours of the debates over public property from the early nineteenth century down to the collapse of the Russian empire. Pravilova's admirable attention to Russian law is always nuanced, careful, and sensitive. Interweaving compelling analysis with broader debates in Russian and European history, this is an accomplished and mature work."—Peter Holquist, University of Pennsylvania

"A Public Empire fundamentally recasts conceptions about property rights in Russia. This dynamic and provocative study pioneers a new and promising direction in Russian history. Pravilova's chapters on defining property in art, religious items, monuments, and manuscripts are utterly novel. No future scholar of late imperial Russia and the beginnings of the USSR will be able to ignore this book."—Jane Burbank, New York University