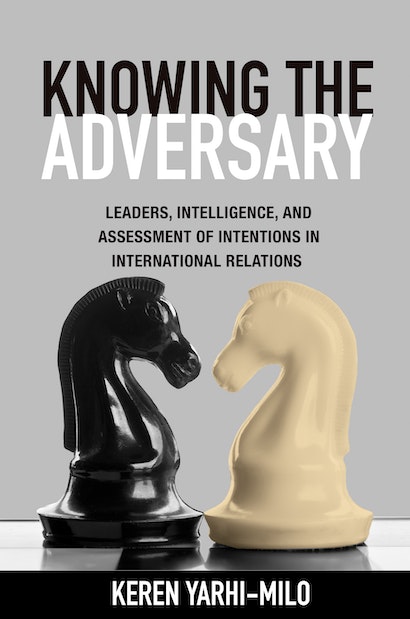 States are more likely to engage in risky and destabilizing actions such as military buildups and preemptive strikes if they believe their adversaries pose a tangible threat. Yet despite the crucial importance of this issue, we don’t know enough about how states and their leaders draw inferences about their adversaries’ long-term intentions. Knowing the Adversary draws on a wealth of historical archival evidence to shed new light on how world leaders and intelligence organizations actually make these assessments.

Keren Yarhi-Milo examines three cases: Britain’s assessments of Nazi Germany’s intentions in the 1930s, America’s assessments of the Soviet Union’s intentions during the Carter administration, and the Reagan administration’s assessments of Soviet intentions near the end of the Cold War. She advances a new theoretical framework—called selective attention—that emphasizes organizational dynamics, personal diplomatic interactions, and cognitive and affective factors. Yarhi-Milo finds that decision makers don’t pay as much attention to those aspects of state behavior that major theories of international politics claim they do. Instead, they tend to determine the intentions of adversaries on the basis of preexisting beliefs, theories, and personal impressions. Yarhi-Milo also shows how intelligence organizations rely on very different indicators than decision makers, focusing more on changes in the military capabilities of adversaries.

Knowing the Adversary provides a clearer picture of the historical validity of existing theories, and broadens our understanding of the important role that diplomacy plays in international security.

Keren Yarhi-Milo is assistant professor of politics and international affairs at Princeton University.

"[Knowing the Adversary] enriches the debate over the best way for policymakers and analysts to filter the vast pools of information they gather about rivals."—Foreign Affairs

"[A] solid scholarly book….The major contribution of the book is the systematic focus on a notoriously amorphous subject—how world leaders and intelligence organizations draw inferences about their adversaries' long-term intentions."—Choice

"Knowing the Adversary is a great success: it is thoroughly researched, well written, convincing in its conclusions, and rich in policy implications of the highest security importance."—Mark L. Haas, Political Science Quarterly

"How do political leaders and intelligence organizations make inferences about adversary intentions? Yarhi-Milo makes a major contribution to the study of this critical question by developing a new theory of threat perception and testing it in three important historical cases. With its extraordinarily detailed historical research, extensive coverage of primary sources, compelling evidence, and balanced interpretations, Knowing the Adversary is indispensable reading for conflict theorists, intelligence analysts, and diplomatic historians."—Jack S. Levy, Rutgers University

"Threat perception is a central topic for international politics, but is remarkably understudied. Yarhi-Milo's fascinating and important book is a huge step forward. Testing theories based on rational choice, organization theory, and psychology, and using original research on British perceptions of Nazi Germany and American views of the USSR, she shows that decision makers and intelligence analysts looked at different indicators and that the attention paid by both groups was highly selective."—Robert Jervis, author of Perception and Misperception in International Politics

"Knowing the Adversary tackles a central question in international security and reaches nonobvious conclusions with wide implications. The quality of the empirical work is outstanding. I can think of few recent qualitative studies that are in its league."—William C. Wohlforth, coauthor of World Out of Balance: International Relations and the Challenge of American Primacy

"Knowing the Adversary makes a significant contribution to the literature on how states assess others' intentions. Surprisingly little research has focused as directly and fully on this important question as Yarhi-Milo does here. She looks carefully at a huge amount of evidence. This is an important book."—Charles L. Glaser, author of Rational Theory of International Politics: The Logic of Competition and Cooperation