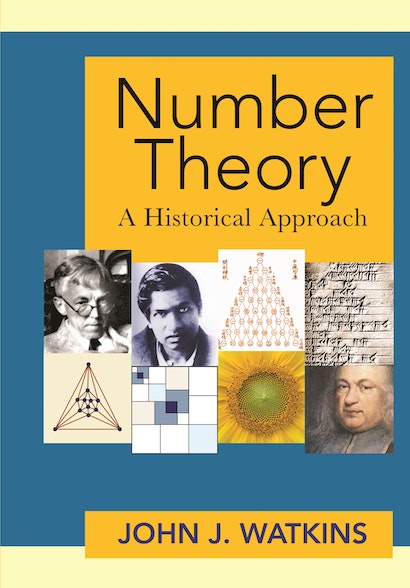 The natural numbers have been studied for thousands of years, yet most undergraduate textbooks present number theory as a long list of theorems with little mention of how these results were discovered or why they are important. This book emphasizes the historical development of number theory, describing methods, theorems, and proofs in the contexts in which they originated, and providing an accessible introduction to one of the most fascinating subjects in mathematics.

Written in an informal style by an award-winning teacher, Number Theory covers prime numbers, Fibonacci numbers, and a host of other essential topics in number theory, while also telling the stories of the great mathematicians behind these developments, including Euclid, Carl Friedrich Gauss, and Sophie Germain. This one-of-a-kind introductory textbook features an extensive set of problems that enable students to actively reinforce and extend their understanding of the material, as well as fully worked solutions for many of these problems. It also includes helpful hints for when students are unsure of how to get started on a given problem.

John J. Watkins is professor emeritus of mathematics at Colorado College. His books include Across the Board: The Mathematics of Chessboard Problems (Princeton), Topics in Commutative Ring Theory (Princeton), Graphs: An Introductory Approach, and Combinatorics: Ancient and Modern.

"An excellent contribution to the list of elementary number theory textbooks. Number theory, it is true, has as rich a history as any branch of mathematics, and Watkins has done terrific work in integrating the stories of the people behind this subject with the traditional topics of elementary number theory. There is more than enough material here for a one-semester course, and while this is standard for textbooks at this level, the added historical and biographical material—which cover mathematical developments and people well into the 20th century—are well worth the increased weight of the text."—Mark Bollman, MAA Reviews

"I know of no other book at this easily accessible level that combines extensive coverage of the mathematics with so many interesting biographical facts and anecdotes."—Thomas W. Cusick, University at Buffalo, State University of New York

"This is a very nice introductory text on number theory. It has a good selection of topics, lots of nice history, and many exercises. There is a lot to like here."—David A. Cox, Amherst College

"Watkins has advanced an outstanding and engaging treatise on the elementary theory of numbers. I expect it to be extremely valuable in inspiring young minds to think deeply about mathematics, and intend to use this text in my own courses on the topic."—Alex Kontorovich, Yale University