How the history of Texas illuminates America's post–Civil War past 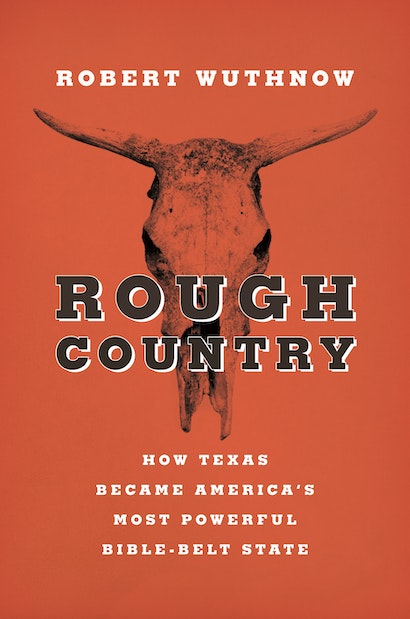 Tracing the intersection of religion, race, and power in Texas from Reconstruction through the rise of the Religious Right and the failed presidential bid of Governor Rick Perry, Rough Country illuminates American history since the Civil War in new ways, demonstrating that Texas’s story is also America’s. In particular, Robert Wuthnow shows how distinctions between “us” and “them” are perpetuated and why they are so often shaped by religion and politics.

Early settlers called Texas a rough country. Surviving there necessitated defining evil, fighting it, and building institutions in the hope of advancing civilization. Religion played a decisive role. Today, more evangelical Protestants live in Texas than in any other state. They have influenced every presidential election for fifty years, mobilized powerful efforts against abortion and same-sex marriage, and been a driving force in the Tea Party movement. And religion has always been complicated by race and ethnicity.

Drawing from memoirs, newspapers, oral history, voting records, and surveys, Rough Country tells the stories of ordinary men and women who struggled with the conditions they faced, conformed to the customs they knew, and on occasion emerged as powerful national leaders. We see the lasting imprint of slavery, public executions, Jim Crow segregation, and resentment against the federal government. We also observe courageous efforts to care for the sick, combat lynching, provide for the poor, welcome new immigrants, and uphold liberty of conscience.

A monumental and magisterial history, Rough Country is as much about the rest of America as it is about Texas.

Robert Wuthnow is the Gerhard R. Andlinger '52 Professor of Social Sciences and director of the Center for the Study of Religion at Princeton University.

"[Wuthnow's] goal is to explain the pitch, moral tone, sharp focus, and sheer loudness of Texas politics as a product of Texas religion. . . . Rough Country is chock-a-block with facts and numbers."—Thomas Powers, New York Review of Books

"Anyone seeking to examine the relationship between modern American religious conservatism and politics needs to look no further than Wuthnow's authoritative, encyclopedic survey of Texas's influence on national trends."—Publishers Weekly

"In this brilliantly detailed book, Wuthnow draws on newspapers, eyewitness accounts and archival material as well as sociological theory, showing how notions of self and other emerged through institution-building practices that helped define Texan (and ultimately, national) identity."—Kirkus

"In Rough Country, Wuthnow draws on an Everest of data to provide a comprehensive analysis of the connections between religion, race, and politics in the state that has given us Lyndon Johnson, George W. Bush, Ted Cruz, Roe v. Wade, FreedomWorks, a key sponsor of the Tea Party, and secessionist threats."—Glenn Altschuler, Huffington Post

"[A] commanding sociological history. . . . Mr. Wuthnow offers a clear-eyed view of the lingering legacies of slavery and segregation, matters that many Texans today prefer to pass over in favour of Alamo heroics. . . . His research, much of it culled from the archives of Texan publications, is exhaustive, and his command of data impressive, from the changing number of clergy in Texas to the growth of livestock handling in the Fort Worth stockyards more than a century ago. There are nuggets on every page, for historians, journalists, clergy and policymakers."—The Economist

"Using the stories of the colorful men and women who drove Texas history, Wuthnow injects surprising life into such normally tame subjects as political theory or statistics about household incomes and the racial breakdowns of counties. For anyone looking to dive into the big, knotty history of one of the most iconic states, this book is well worth the time."—William O'Connor, Daily Beast

"Wuthnow's elaboration on the point of morality is especially illuminating. . . . Throughout the book, Wuthnow emphasizes that aside from its size and natural resources, Texas should be considered a microcosm of the United States, rather than a national exception."—Robyn Ross, Texas Observer

"Combining a wealth of detail with a broad narrative reach, Mr. Wuthnow's book tells the story of how faith, right-wing politics, and big money have shaped the state in complex ways. . . . Rough Country makes for encouraging or disturbing reading, depending upon which side of the Left-Right divide you are on."—Barry Alfonso, Pittsburgh Post-Gazette

"Wuthnow seeks . . . to account for the raw power of Texas's red state religion and he has undertaken that massive task with all of the skill expected of such an accomplished scholar."—Journal of Southern Religion

"I have no idea of Robert Wuthnow is a Texan, but if only those born in Texas understand the state, he must be. . . . [A]ll readers will, I believe, find amid the details that make this such a rich book an important account of the complex role religion has played and continues to play in American life."—Stanley Hauerwas, First Things

"Mixing historical anecdotes gleaned from newspaper accounts, memoirs, and diaries with demographic studies and sociological analysis and using historical narrative as a framework, Wuthnow shows how this rough state with its rough religion and its rough relationship with race became such a powerful force in Bible Belt politics. . . . Wuthnow is a careful sociologist and his research is meticulous: he is a master of telling what happened and how it happened."—Kyle Childress, Christian Century

"Rough Country combines a careful treatment of religious history in Texas with sociological insights about the way religion functions in people's lives. Like everything Wuthnow writes, it demands careful attention. . . . A stoutly researched book full of interesting stories and important multi-layered interpretations, Rough Country should be required reading for every evangelical leader concerned with race, religion, or politics."—Miles Mullin, Christianity Today

"Wuthnow's comprehensive study of religion in Texas examines how evangelical Christianity has shaped a state with a powerful influence on US politics, especially in recent decades. . . . Though the book is primarily a historical narrative, this study of how faith and politics intertwine in Texas has much to offer to sociologists, political scientists, and scholars of religion in the U.S."—Choice

"It is well-written, well-argued, thorough, and engaging."—Sean P. Cunningham, Journal of Church and State

"No other study of Texas is quite like this one, certainly no other is as comprehensive, and anyone interested in religion in America and its intertwining with conservative politics, especially scholars, will find the work enlightening."—John W. Storey, The Journal of American History

"Whether you are a Lone Star native with a Texocentric worldview or simply an interested observer of American civil religion, Rough Country provides a clear glimpse at religion's past that can reshape how evangelicals engage the future."—Phillip Bethancourt, The Gospel Coalition

"Rough Country is a well-written and nuanced narrative of Texas religious history. . . . A timely and important contribution that should be read by those in the academy and those outside it."—Emily Suzanne Clark, Common Reader

"One of the most thorough studies of a southern state's religious history to date. . . . Rough Country is an impressive piece of scholarship. . . . Wuthnow writes with characteristic precision and clarity, and the book is filled with fascinating characters and memorable anecdotes that routinely illustrate points and subpoints."—Darren E. Grem, Journal of Southern History

"This book is a tour de force by one of the USA’s leading sociologists."—Graham A. Duncan, Journal of Ecclesiastical History

"Robert Wuthnow has never shied away from tackling big subjects, but this sweeping, detailed, complex, yet flowing account and analysis of more than 150 years of religion, race, politics, and social change in Texas must rank among the very best of his many books. And while Texans often think of ourselves as living in ‘a whole 'nuther country,' Wuthnow deftly shows that what happens in Texas doesn't stay in Texas."—William Martin, Rice University's Baker Institute

"This is a rich history of Texas presented with a sociologist's keen eye for communities, institutions, legal processes, and social variables. The book is even more valuable for narrating the connections among race, religion, and politics that make Texas both singular in itself and representative of the nation as a whole. Rough Country is a splendid achievement."—Mark A. Noll, author of God and Race in American Politics: A Short History

"In this meticulously researched and beautifully written book, Robert Wuthnow offers a sweeping history of Texas's unrivaled place in American civil religion. Addressing topics as varied as presidential politics, race and religion, and demographic change since the nineteenth century, Rough Country teaches us not only about one of the nation's most intriguing—and in some ways, surprising—states but also about the nation as a whole. This nuanced, fascinating volume should be in the hands of everyone who wants to understand the place of public faith in our world today."—D. Michael Lindsay, president of Gordon College

"With characteristic precision and authority, Robert Wuthnow offers a conclusive account of how and why Texas has so profoundly defined modern American religion and politics. From his exhaustive research in a sweeping range of sources, he draws out one illustrative character and colorful anecdote after another, and combines them with incisive analysis of sociological data to create a compelling portrait of the Lone Star State's ascent. A good read as much as an exceptional piece of scholarship, Rough Country proves that as Texas has gone, so has the nation."—Darren Dochuk, author of From Bible Belt to Sunbelt

"This book tells a story that hasn't been told before. Writing in an engaging narrative style, Robert Wuthnow describes the major events and religious currents in U.S. history over the past century and a half as they played out in Texas. The book will appeal to anyone interested in U.S. history or in how religion and race intersected with events in America's past."—Helen Rose Ebaugh, University of Houston