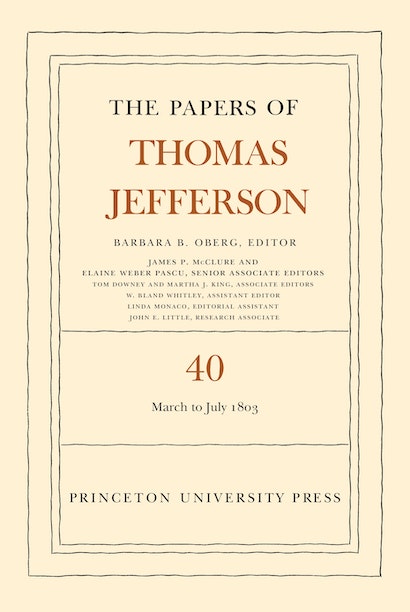 This volume opens on 4 March 1803, the first day of Jefferson’s third year as president. Still shaken by the closing of the right of deposit at New Orleans, he confronts the potential political consequences of a cession of Louisiana to France that might result in a denial of American access to the Mississippi. But he resists pressures to seize New Orleans by force, urging patience instead. The cabinet determines in April that “all possible procrastinations” should be used in dealing with France, but that discussions with Great Britain move forward as well. In Paris, a treaty for the cession of the Louisiana Territory to the United States is signed, and in May the right of deposit is restored. On 3 July, word reaches Jefferson in Washington of the agreement that France has sold the entire Territory for $15 million. The glorious news, which may be the most momentous that Jefferson receives while president, appears in the National Intelligencer the following day. Having received congressional approval to send an expedition to locate a continental route to the Pacific, Jefferson drafts instructions and a cipher for Meriwether Lewis and arranges for the needed instruments. Following through on a promise to a friend to give his views of Christianity, Jefferson puts his religious creed on paper, a “Syllabus” of the morals of Jesus and the comparative merits of Christianity. He intends it only for a few trusted friends.