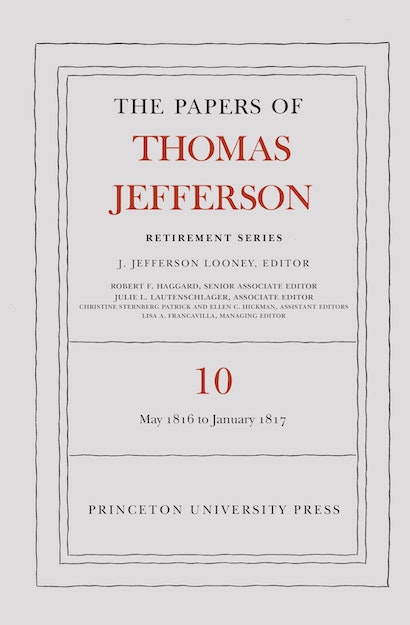 The 558 documents in this volume cover the period from 1 May 1816 to 18 January 1817. During this time, Jefferson expects political upheaval in Great Britain, welcomes the imminent presidential transition from James Madison to James Monroe, and privately suggests substantial amendments to Virginia’s constitution. Jefferson occasionally gives legal advice, including an opinion on whether perjury can be committed before a grand jury. He turns down a request to sell Natural Bridge, calculates the latitude of Poplar Forest and Willis’s Mountain, receives a large shipment of foreign books, exchanges the last of a series of letters with Pierre Samuel Du Pont de Nemours, and is appointed a visitor of Central College. As before, sojourners flock to Monticello. The Baron de Montlezun and Francis Hall provide informative accounts of Jefferson’s home, way of life, and thoughts on many subjects. Jefferson attempts to bring Destutt de Tracy’s Treatise on Political Economy into print, offers biographical information for Delaplaine’s Repository, and recommends revisions to a forthcoming biography of Patrick Henry. Jefferson and Francis Adrian Van der Kemp trade letters about Jesus’s life and teachings, and after the ailing Charles Thomson circulates the mistaken idea that Jefferson has converted to Christianity, correspondents question him about his spiritual beliefs.