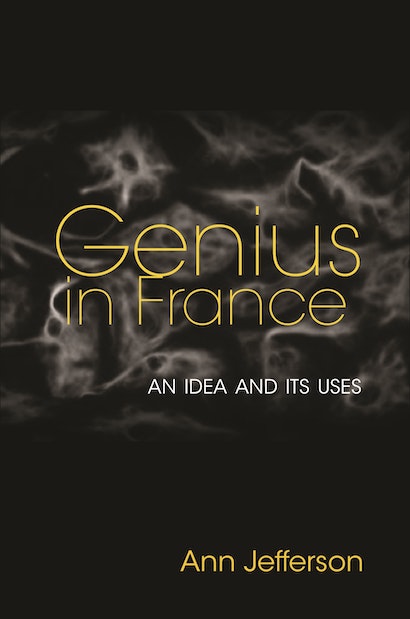 This engaging book spans three centuries to provide the first full account of the long and diverse history of genius in France. Exploring a wide range of examples from literature, philosophy, and history, as well as medicine, psychology, and journalism, Ann Jefferson examines the ways in which the idea of genius has been ceaselessly reflected on and redefined through its uses in these different contexts. She traces its varying fortunes through the madness and imposture with which genius is often associated, and through the observations of those who determine its presence in others.

Jefferson considers the modern beginnings of genius in eighteenth-century aesthetics and the works of philosophes such as Diderot. She then investigates the nineteenth-century notion of national and collective genius, the self-appointed role of Romantic poets as misunderstood geniuses, the recurrent obsession with failed genius in the realist novels of writers like Balzac and Zola, the contested category of female genius, and the medical literature that viewed genius as a form of pathology. She shows how twentieth-century views of genius narrowed through its association with IQ and child prodigies, and she discusses the different ways major theorists—including Sartre, Barthes, Derrida, and Kristeva—have repudiated and subsequently revived the concept.

Rich in narrative detail, Genius in France brings a fresh approach to French intellectual and cultural history, and to the burgeoning field of genius studies.

Ann Jefferson is professor of French literature at the University of Oxford and fellow and tutor in French at New College, Oxford. Her books include Reading Realism in Stendhal and Biography and the Question of Literature in France.

"[Ann Jefferson] outlines for the first time a body of writings on genius in France that have tended to be overlooked until now."—Celine Surprenant, Times Literary Supplement

"The precise linguistic, literary, and sociocultural analysis with which she supports this wide-ranging exploration of intellectual history provides compelling evidence for her contention that there is value in taking into account the particular language and cultural tradition within which ideas are expressed."—Jessica Goodman, French Studies

"Ann Jefferson in Genius in France offers a génial and genial meditation on the question, focusing on a country that probably uses the word more than any other."—Andrew Martin, Literary Review

"In the mid-twentieth century the concept of 'genius' was often dismissed as a mystification, an invitation to adore what we couldn't understand. Yet, Ann Jefferson's rich and astute history of the uses of the term in France shows that, from the eighteenth century to the present day, much of what matters in our thinking about the mind, and about the arts and sciences, could not have been thought without it."—Michael Wood, Princeton University

"A marvelous topic brilliantly handled. Ann Jefferson's superb literary and cultural analysis makes a series of probes into the fascinating history of the idea of genius, carrying us, after a look back at antiquity, from Diderot and Mme de Staël to Cixous and Derrida. The sparkling account of child prodigies, fakes, and frauds is a tour de force. This is a book that will engross and delight readers with a wide range of interests."—Michael Sheringham, All Souls College, University of Oxford

"Is genius a sign of divine inspiration or clinical madness? Does it attract admirers, or doom its possessor to solitude? Can a woman, or a child, be a genius? In Ann Jefferson's immensely learned tour of three hundred years of French cultural debates, writers and philosophers rub shoulders with doctors, journalists, and child prodigies. Jefferson's wide-ranging and engagingly written study of genius in France is a tremendous achievement."—Toril Moi, Duke University

"Ann Jefferson's magnificent work on the notion of genius examines a vast array of French artistic, philosophical, and medical debates, showing how genius was linked to perfection and fraudulence, national glory and exclusion, and the highest mental powers and degeneracy. Written in a marvelously accessible style, this book represents a decisive, lasting contribution to the history of French intellectual and literary life."—Thomas G. Pavel, University of Chicago

"This book follows how the French viewed the idea of genius, from the eighteenth to the twentieth century. Jefferson's work is erudite and clear, challenging and persistent."—David Bellos, author of Is That a Fish in Your Ear?: Translation and the Meaning of Everything

"This thoughtful and engaging book combines rigorous literary and intellectual history with linguistic sensitivity to track cultural understandings of genius from the eighteenth century to the present in French thought and writing. Genius in France will change how this idea is conceptualized and discussed."—Miranda Gill, University of Cambridge