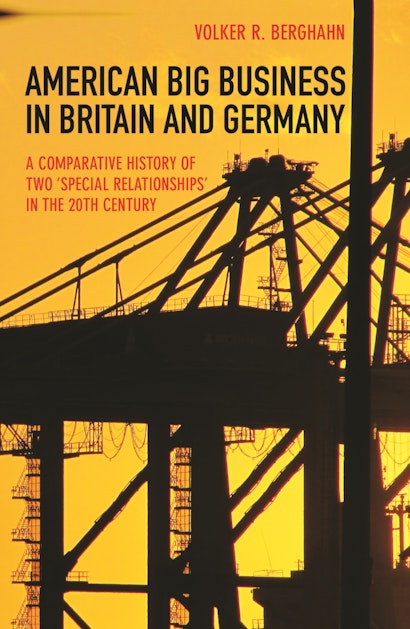 While America’s relationship with Britain has often been deemed unique, especially during the two world wars when Germany was a common enemy, the American business sector actually had a greater affinity with Germany for most of the twentieth century. American Big Business in Britain and Germany examines the triangular relationship between the American, British, and German business communities and how the special relationship that Britain believed it had with the United States was supplanted by one between America and Germany.

Volker Berghahn begins with the pre-1914 period and moves through the 1920s, when American investments supported German reconstruction rather than British industry. The Nazi seizure of power in 1933 led to a reversal in German-American relations, forcing American corporations to consider cutting their losses or collaborating with a regime that was inexorably moving toward war. Although Britain hoped that the wartime economic alliance with the United States would continue after World War II, the American business community reconnected with West Germany to rebuild Europe’s economy. And while Britain thought they had established their special relationship with America once again in the 1980s and 90s, in actuality it was the Germans who, with American help, had acquired an informal economic empire on the European continent.

American Big Business in Britain and Germany uncovers the surprising and differing relationships of the American business community with two major European trading partners from 1900 through the twentieth century.

Volker R. Berghahn is the Seth Low Emeritus Professor of History at Columbia University. His books include America and the Intellectual Cold Wars in Europe and Europe in the Era of Two World Wars (both Princeton).

"Even for readers who struggle to find support for some of its claims . . . this formidably eclectic report on some neglected themes offers an interesting survey of the changing perspectives of American and European business elites on multiple important issues."—Leslie Hannah, EH.Net

"This outstanding comparative study examines a neglected force in the growing influence of the U.S. on 20th-century Europe and its 'Americanization' until about 1957 and Great Britain's debacle in the Suez Crisis. . . . This book is absolutely essential for the most advanced readers in the social sciences."—Choice

"Berghahn's impressive and innovative work of transnational history will form a key point of departure for scholarship on these additional areas of complexity."—Ray Stokes, American Historical Review

"Berghahn has provided a book of original scholarship that challenges earlier works concentrating on the ‘special relationship' between the United States and Great Britain. . . . Employing a wide range of sources, especially newspapers and the private writings of contemporaries, Berghahn provides a riveting economic-diplomatic history, illustrating quite clearly that power follows the money."—Mark D. Kuss, German Studies Review

"Berghahn's study is a significant one, calling attention to a long history, too little studied, of a German-American ‘special relationship' based on big business connections and insisting upon the value of broad, qualitative historical narratives in economic history. On both of these scores, this ambitious book succeeds."—Emily S. Rosenberg, Journal of Modern History

"This is an interesting and attractive book about the Americanization of European—particularly British and German—business culture in the first half of the twentieth century. Strengthened by the documents of notable individuals, the book will interest general historians of twentieth century Europe and Americanization, and be useful to those studying debates about capitalism."—Harold James, Princeton University

"In this important book, Berghahn illuminates the two special transatlantic relationships which the U.S. government and especially U.S. big business developed with Britain and Germany. Focusing on the attitudes and policies of American economic and political elites, this expansive book draws effectively from rich secondary literature and primary sources."—Mary Nolan, New York University

"Overall, the German-American 'special relationship' was more intensive and successful than the British-American one. Berghahn convincingly examines the ups and downs and the recurrent patterns of the triangular relationship that shaped the economic development of the largest economy in the world and its most important European partners. . . . In this sense, a 'triangular history' is innovative, as it analyzes the American focus from a comparative perspective and thus facilitates a distinct advance in knowledge."—Christian Kleinschmidt