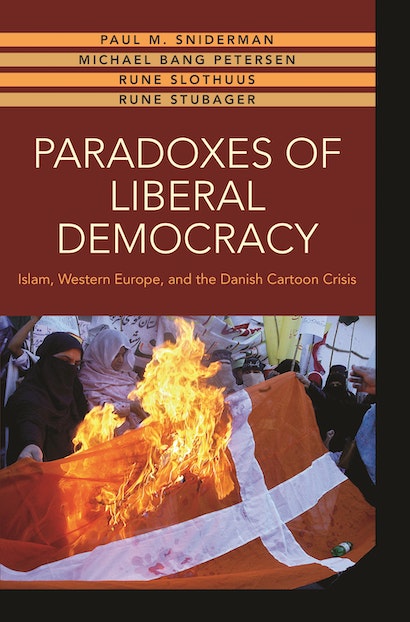 In 2005, twelve cartoons mocking the prophet Mohammed appeared in the Danish newspaper Jyllands-Posten, igniting a political firestorm over demands by some Muslims that the claims of their religious faith take precedence over freedom of expression. Given the explosive reaction from Middle Eastern governments, Muslim clerics, and some Danish politicians, the stage was set for a backlash against Muslims in Denmark. But no such backlash occurred.

Paradoxes of Liberal Democracy shows how the majority of ordinary Danish citizens provided a solid wall of support for the rights of their country’s growing Muslim minority, drawing a sharp distinction between Muslim immigrants and Islamic fundamentalists and supporting the civil rights of Muslim immigrants as fully as those of fellow Danes—for example, Christian fundamentalists. Building on randomized experiments conducted as part of large, nationally representative opinion surveys, Paradoxes of Liberal Democracy also demonstrates how the moral covenant underpinning the welfare state simultaneously promotes equal treatment for some Muslim immigrants and opens the door to discrimination against others.

Revealing the strength of Denmark’s commitment to democratic values, Paradoxes of Liberal Democracy underlines the challenges of inclusion but offers hope to those seeking to reconcile the secular values of liberal democracy and the religious faith of Muslim immigrants in Europe.

Paul M. Sniderman is the Fairleigh S. Dickinson Jr. Professor of Public Policy at Stanford University and a fellow of the American Academy of Arts and Sciences. Michael Bang Petersen, Rune Slothuus, and Rune Stubager are professors of political science at Aarhus University in Denmark.

"This fascinating book addresses a fundamental problem of immense importance for current social and political life in a functioning Western democracy. Starting from the cartoon crisis that highlighted the clash of democratic values and Muslim fundamentalism, the authors employ a rich combination of qualitative and survey research methods to examine the responses of Danes that puzzled observers. . . . This study, rich in empirical evidence on the Danish example, provides insight into how other Western democracies could learn to better relations with immigrant minorities in their countries."—Choice

"The analysis presented in this book is structured well, clearly organized and argued, and deeply rooted in survey and experimental empirical data. The authors build a persuasive argument out of relatively basic but solid quantitative evidence, and thus the book should be an accessible read at either the undergraduate or graduate level."—Kelley Strawn, American Journal of Sociology

"The book's perspective is enticing, not to say timely. . . . The book's effort to overcome the clash of values between Islam and the West is quite laudable."—Jocelyne Cesari, Journal of Church and State

"Taking its starting point from the infamous Danish cartoon crisis and the clash of democratic values and Muslim fundamentalism that followed, this engagingly written, methodologically sophisticated, and creative study of public opinion adds substantially to a growing body of research into this 'clash of civilizations'. The views of the Danish majority, far from scapegoating and vilifying the Muslim minority, distinguished carefully and intelligently between upholding the rights of this minority to live as Danish citizens while at the same time restricting freedoms for those associated with the threat of fundamentalist violence. This superb analysis of the nuances of public morality convincingly eschews simple answers to important and complex questions."—Geoffrey Evans, University of Oxford

"The paradox of liberal democracy is that, at the height of the Danish cartoon controversy, the Danes did not launch a broadside attack against the civil liberties of their Muslim minority. The pages of this book bring that paradox alive with compelling theoretical and methodological arguments. This is a splendid work of scholarship."—James L. Gibson, Washington University in St. Louis

"This tremendously interesting and highly relevant book has an encouraging message: Danish citizens stood behind the civil liberties of Muslims even at the height of the Danish cartoon crisis. It shows that what common sense expected to happen—a backlash—did not happen, and then explains why with a straightforwardness and immediacy that are rare for an academic text."—Hanspeter Kriesi, European University Institute

"Paradoxes of Democracy is a rich and provocative study of the political dynamics that arise when cultures clash. This study of the tensions over the publication of political cartoons about Mohammed in the Danish newspaper Jyllands-Posten will enrich our understanding of the interaction of elite actions and public opinion when tolerance is tested."—Russell Dalton, University of California, Irvine

"This timely and important book establishes the inherent tolerance of the Danes at a time when opinions should have been most likely to spill over into hostility. It will be widely cited and probably controversial, as the news today continues to focus on the intolerance in Denmark for Muslims. Paradoxes of Liberal Democracy is a pleasure to read."—Holli A. Semetko, Emory University