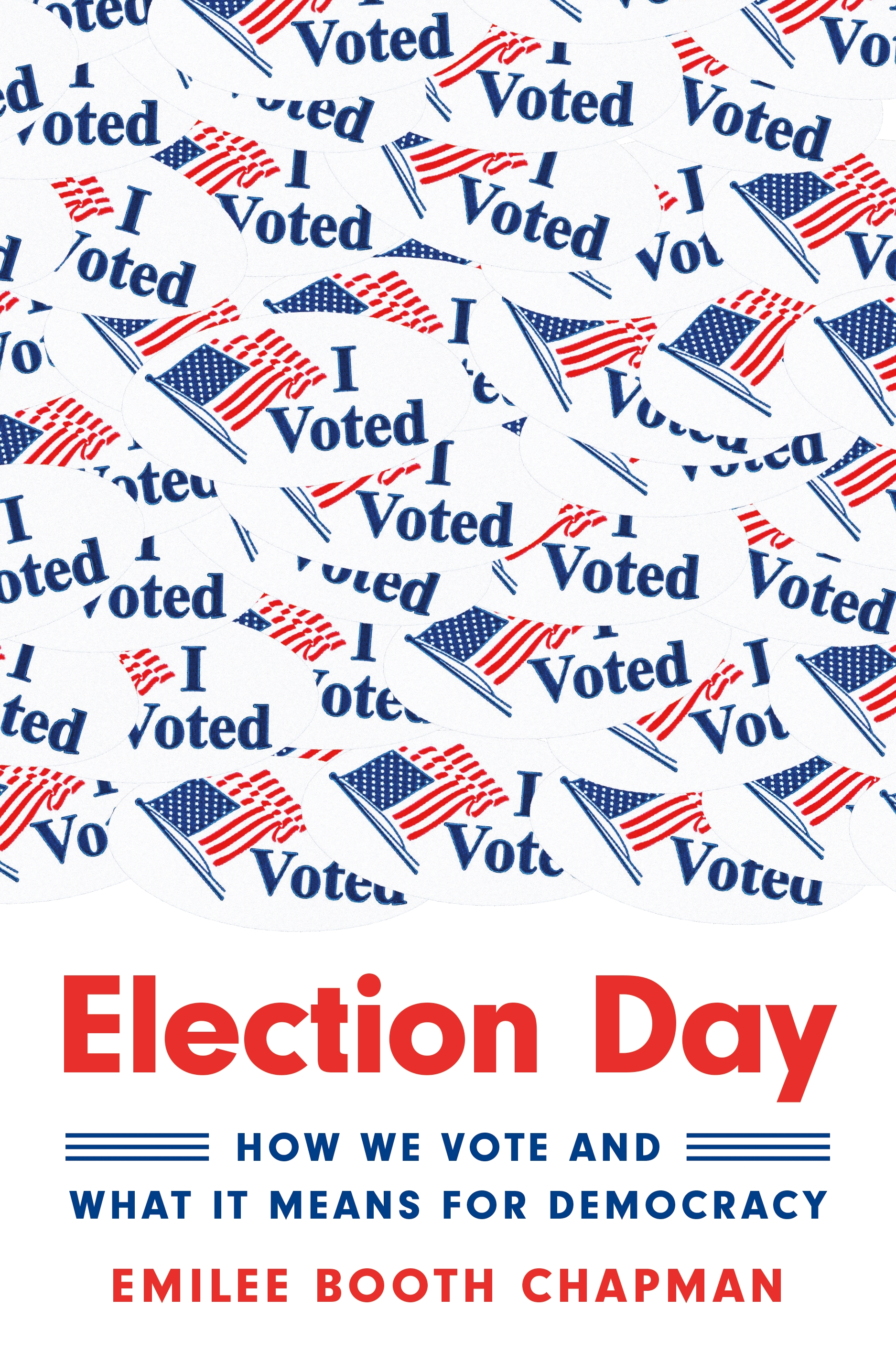 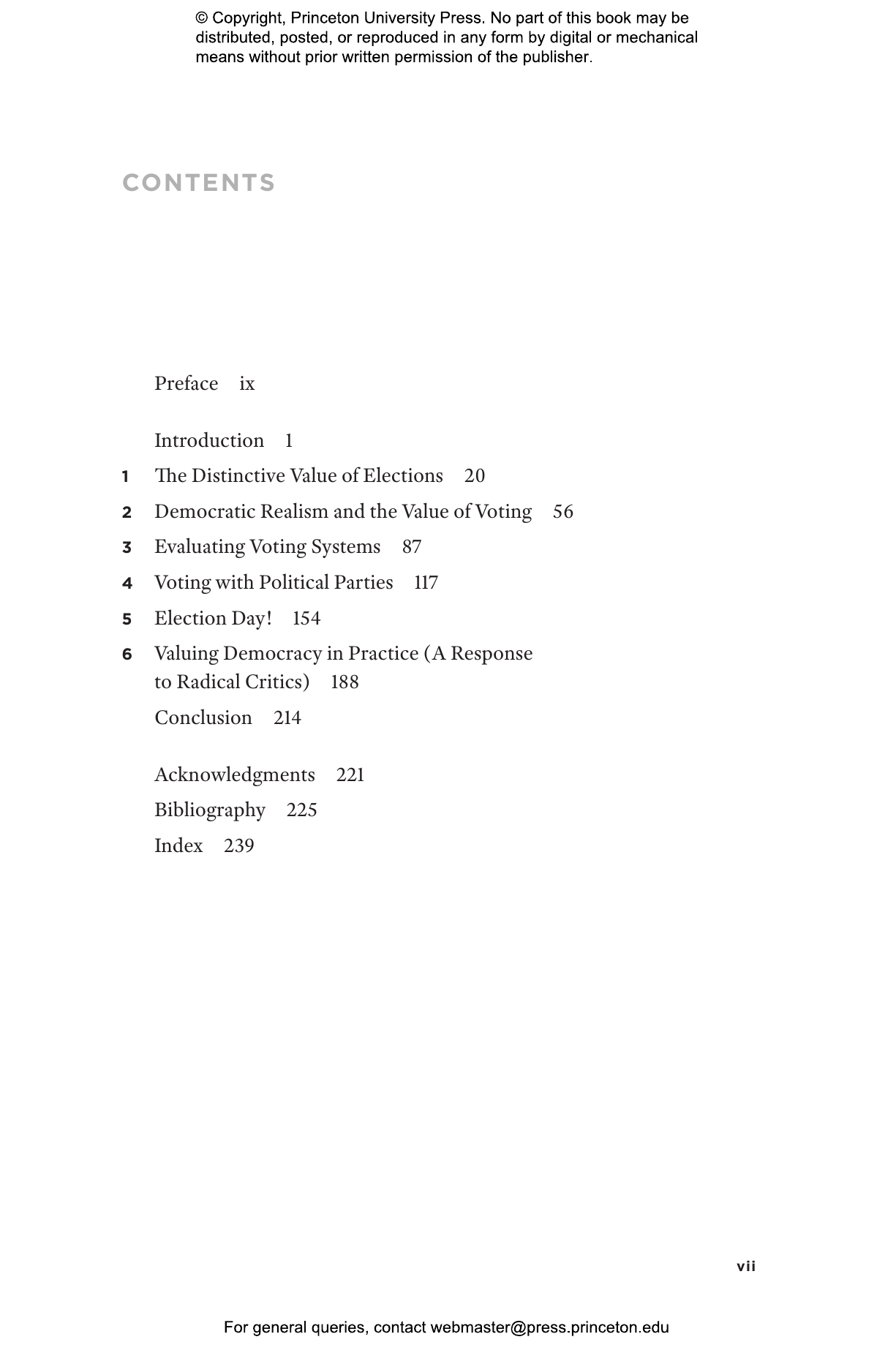 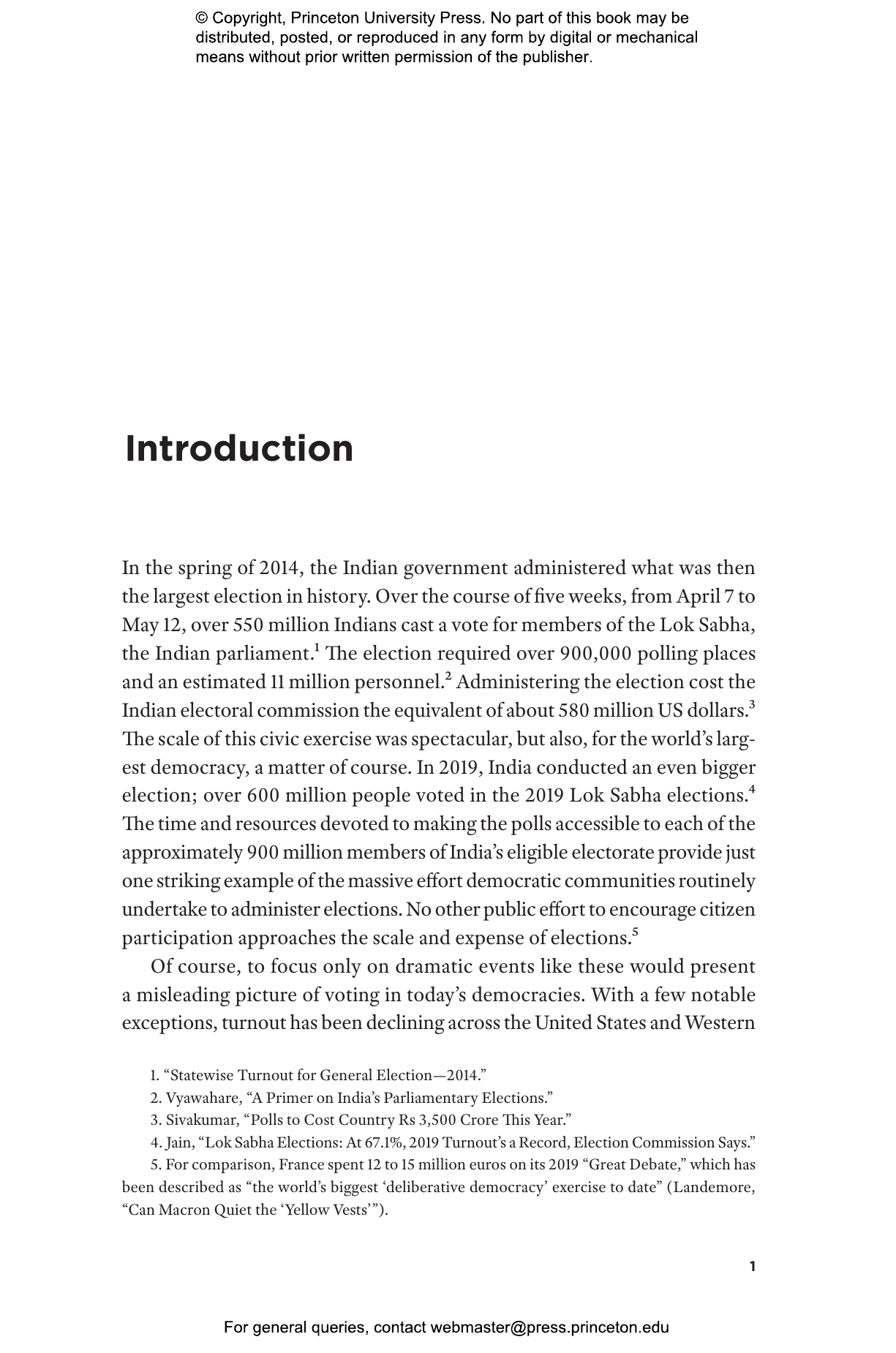 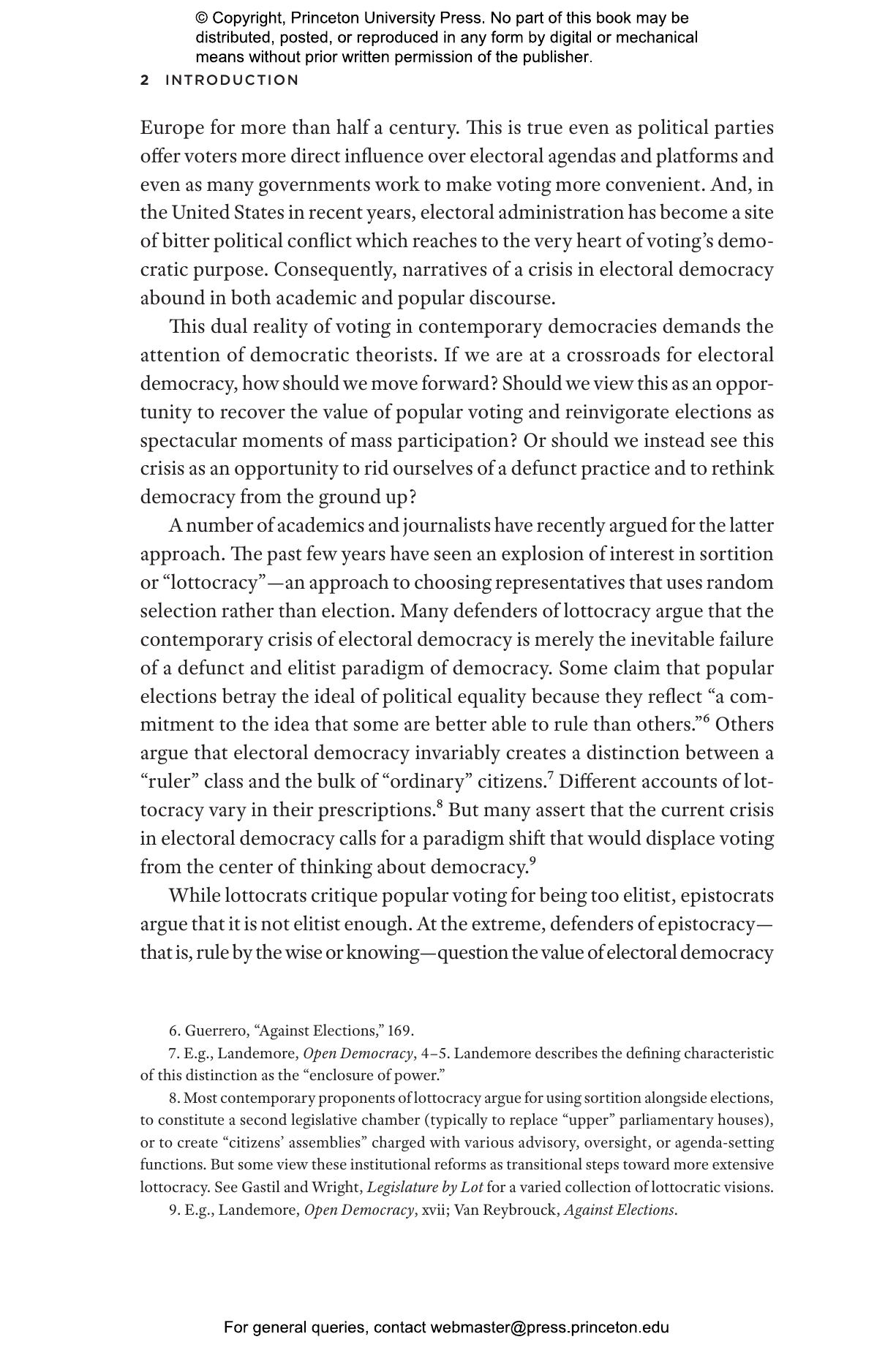 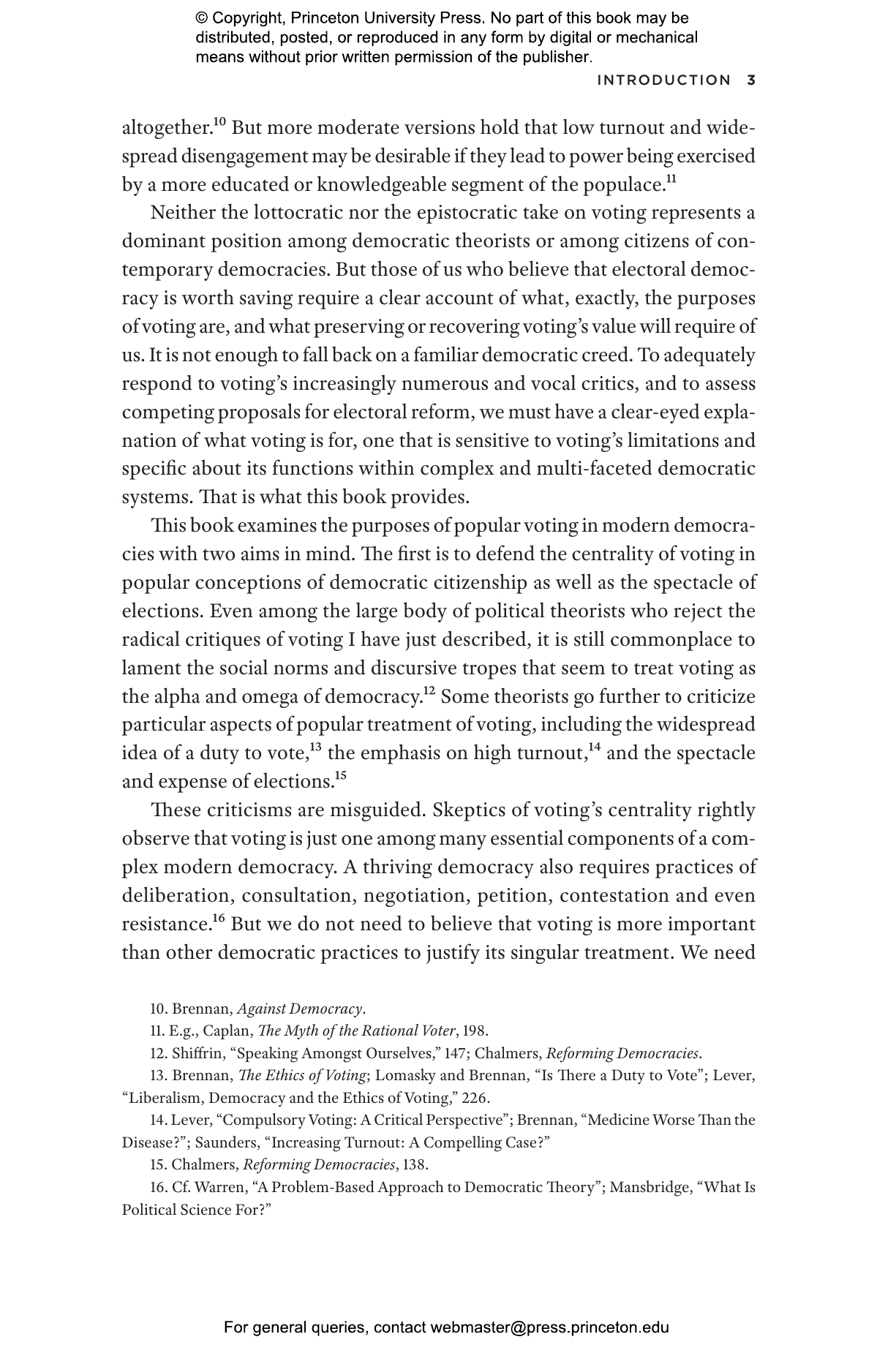 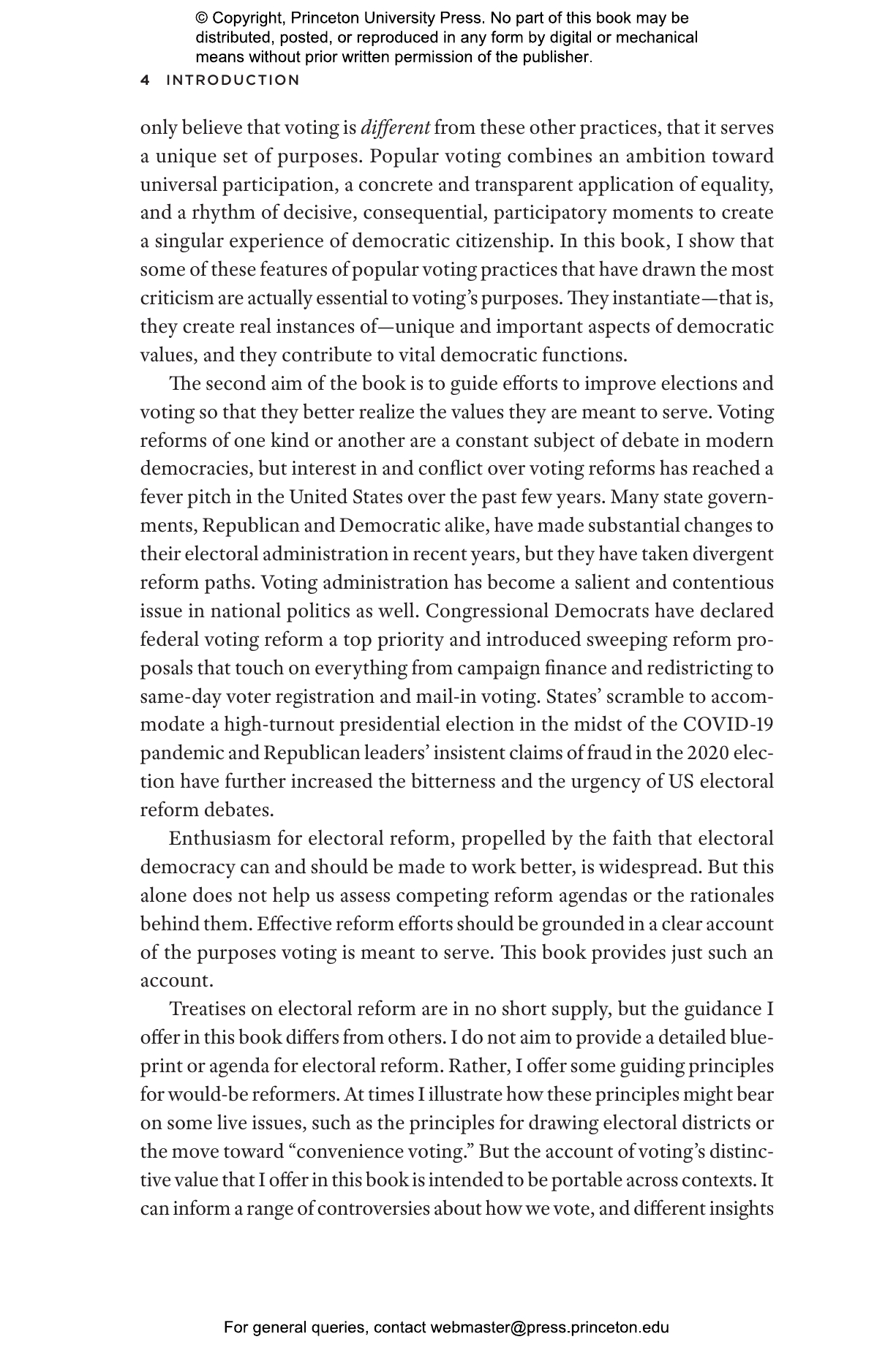 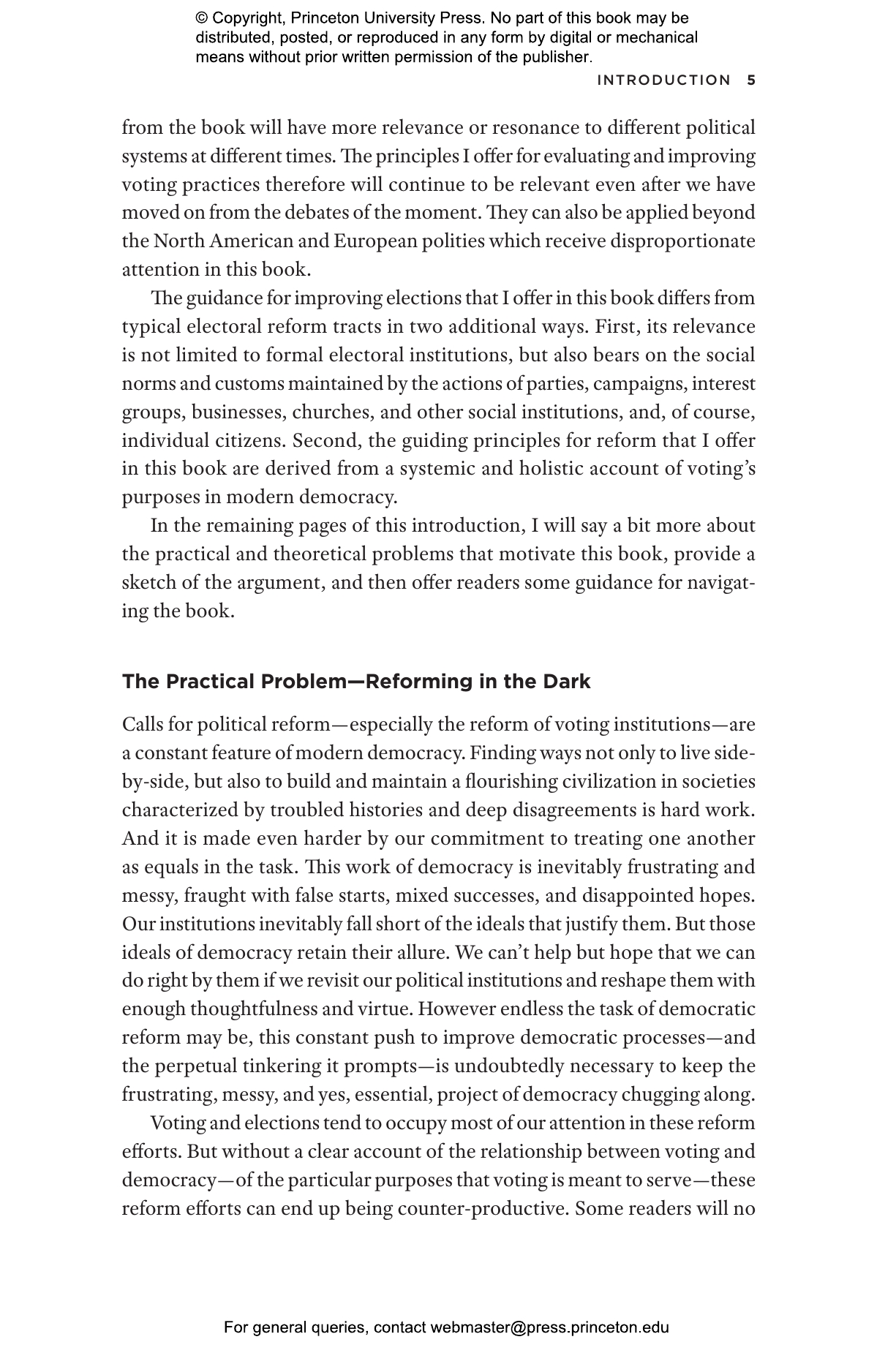 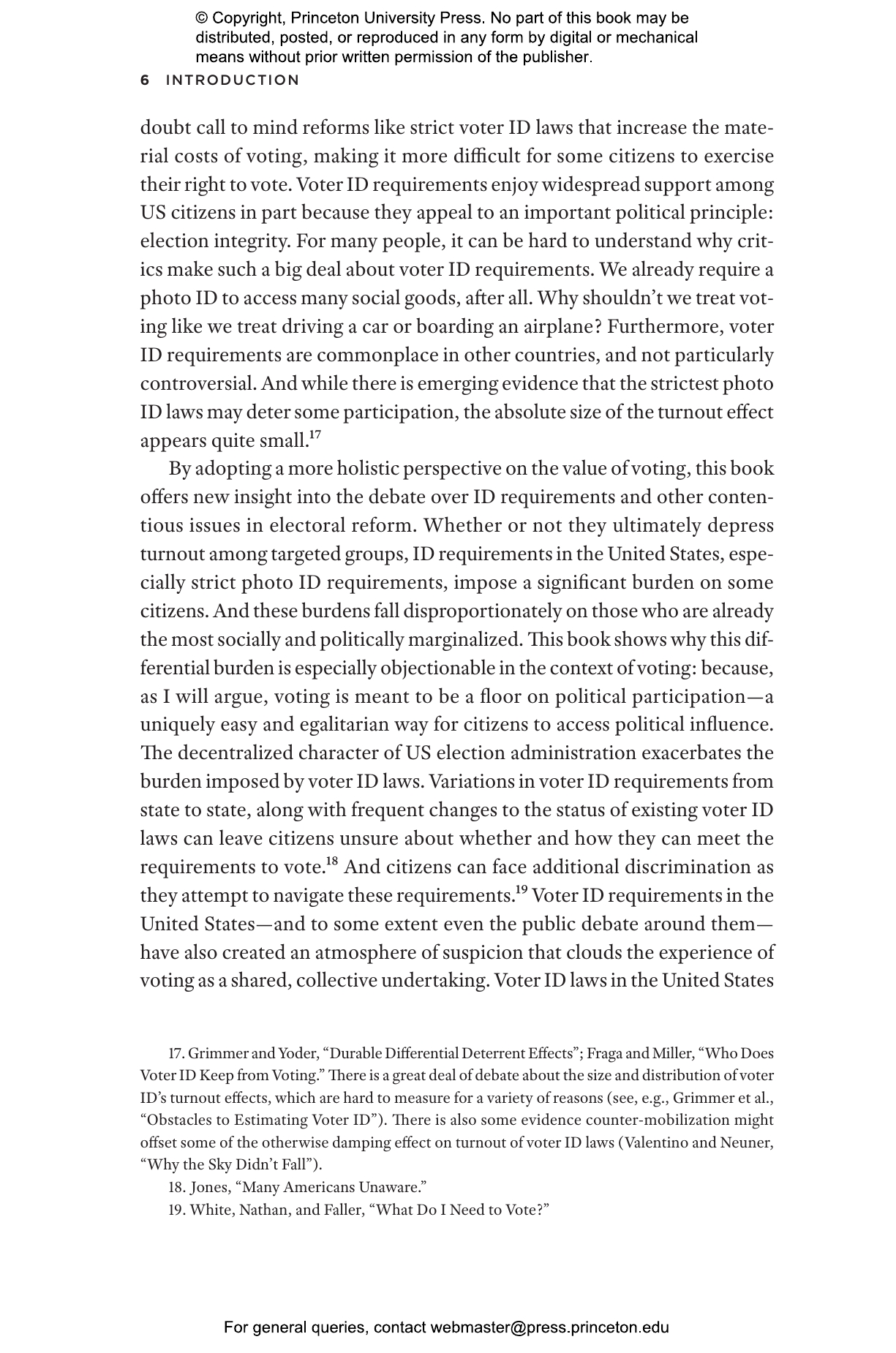 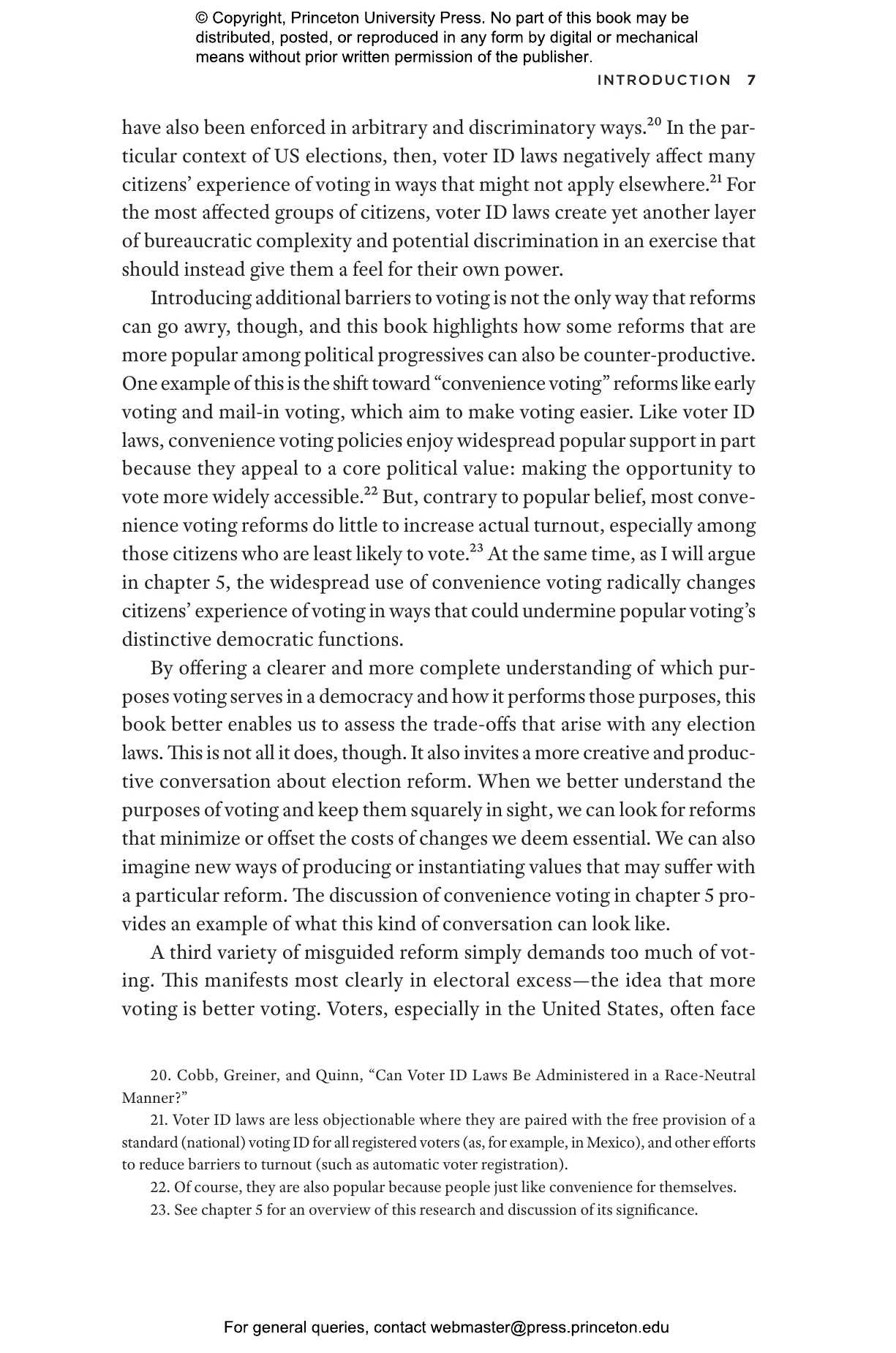 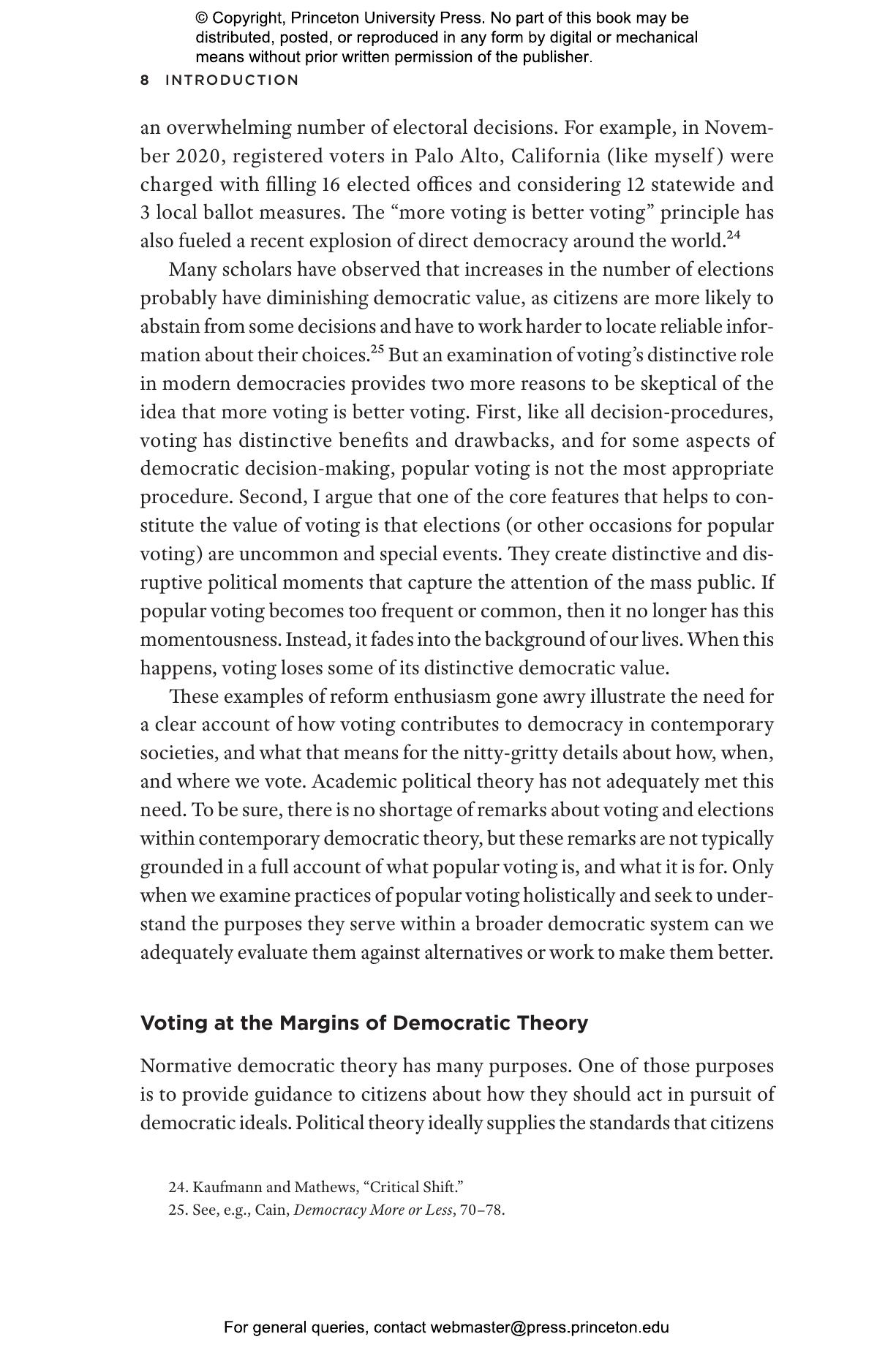 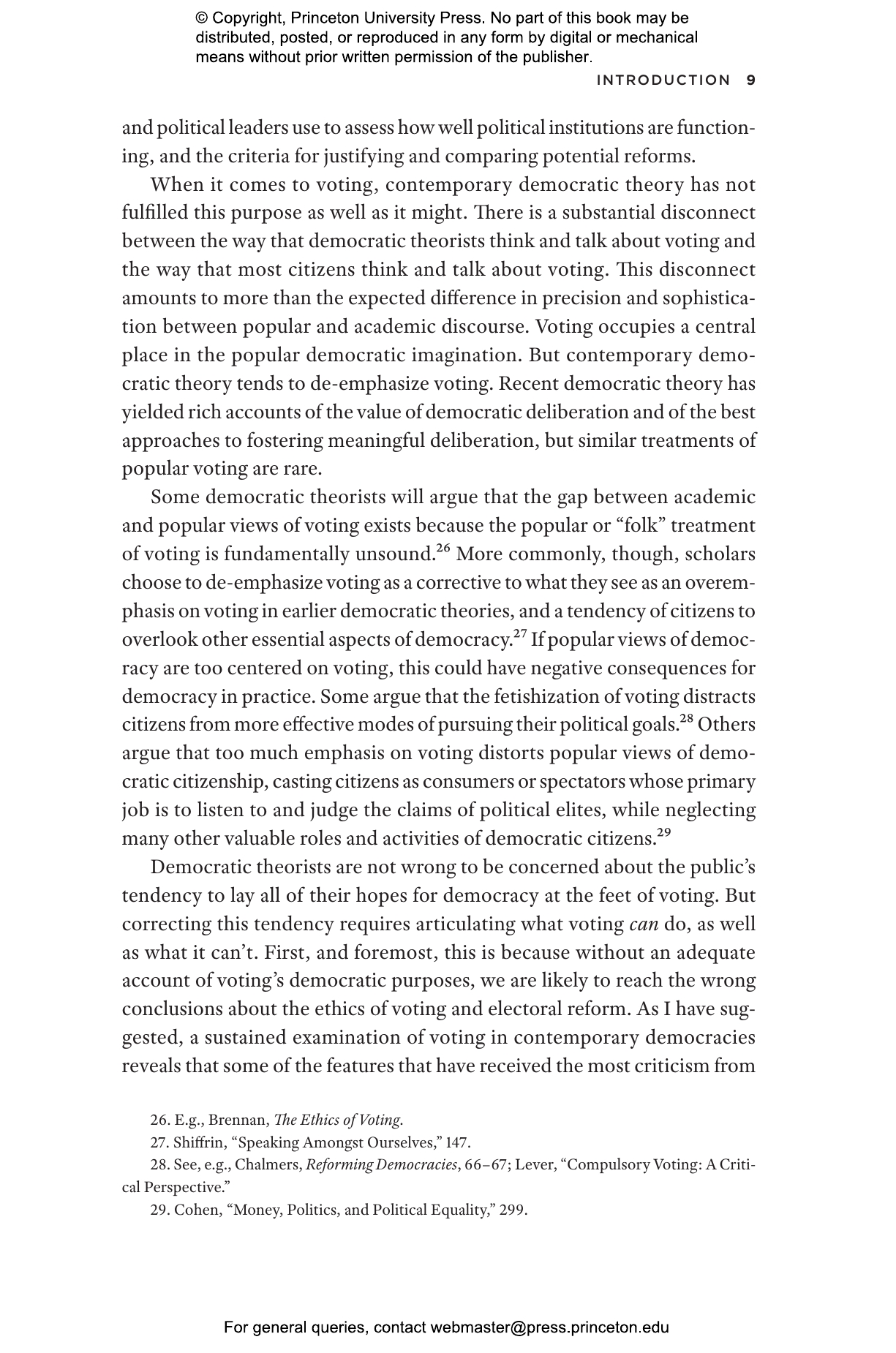 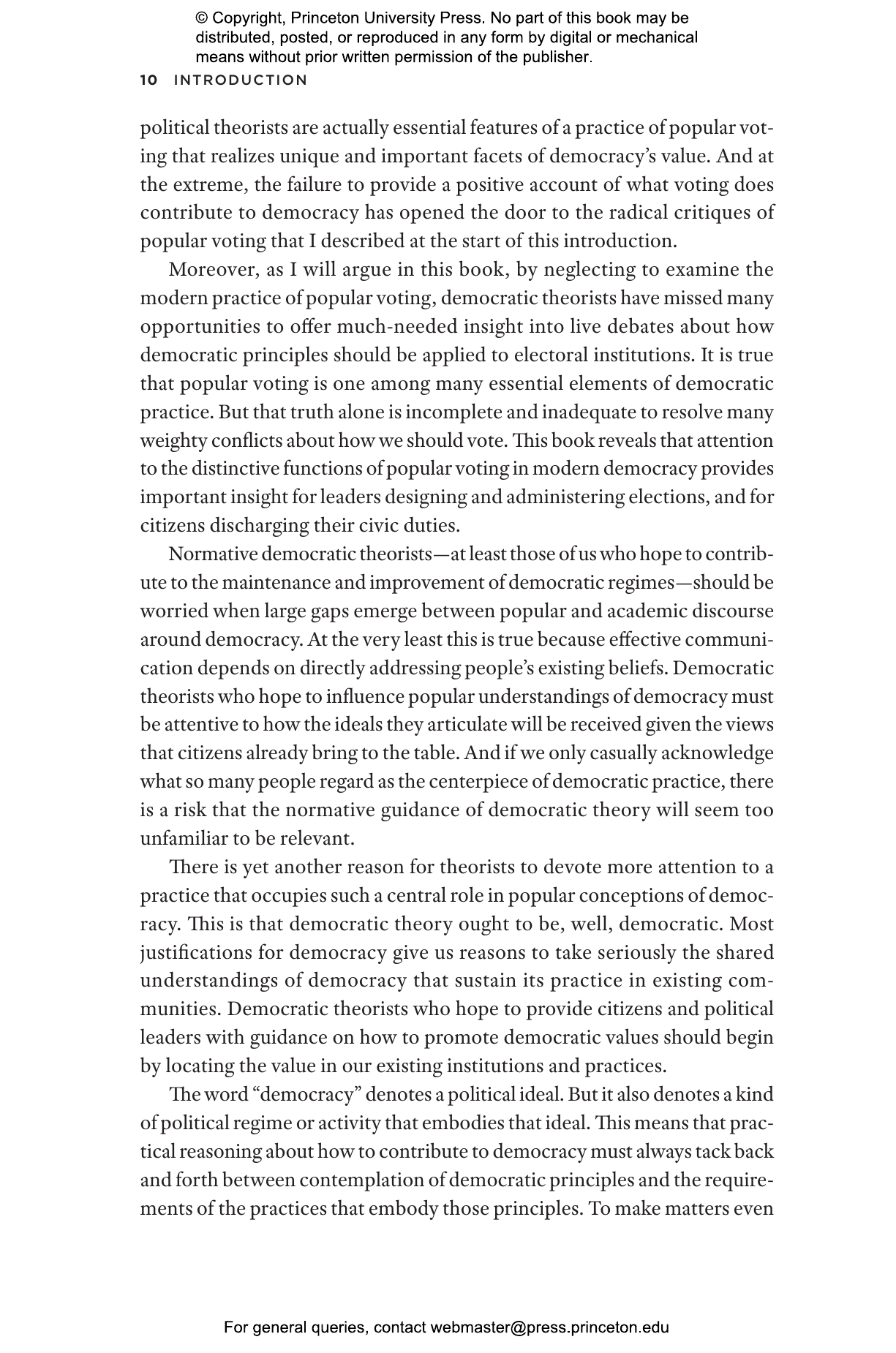 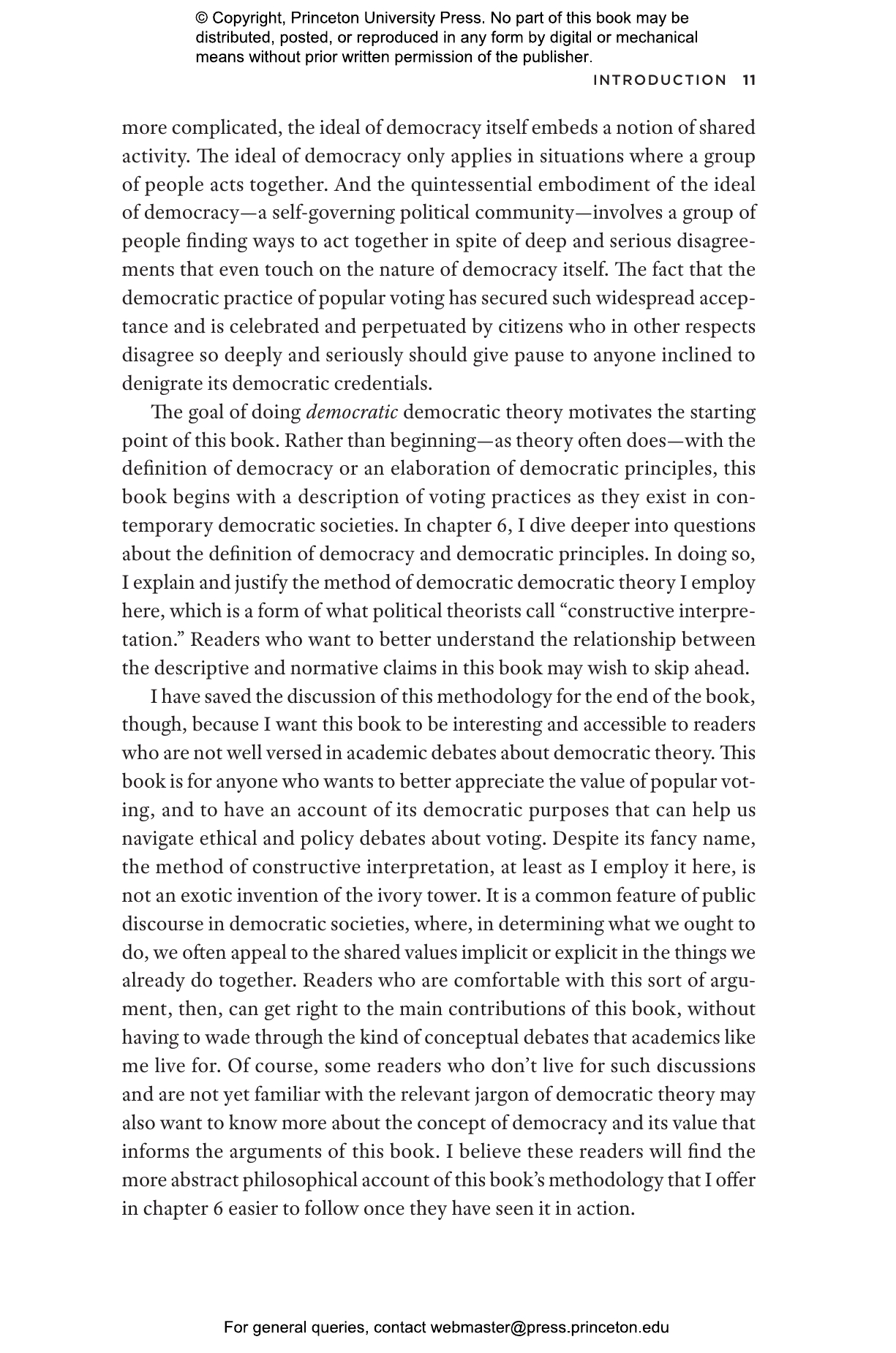 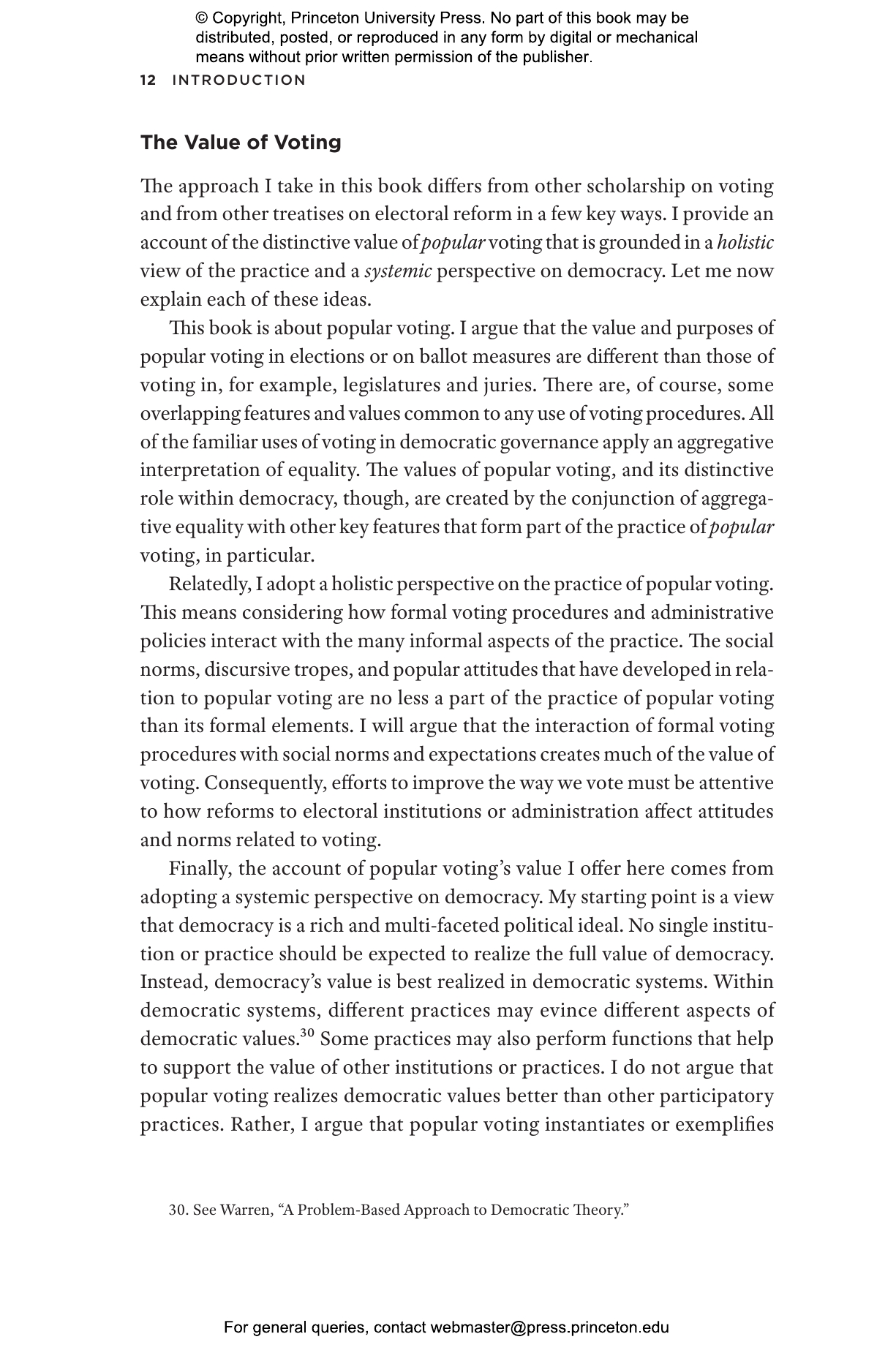 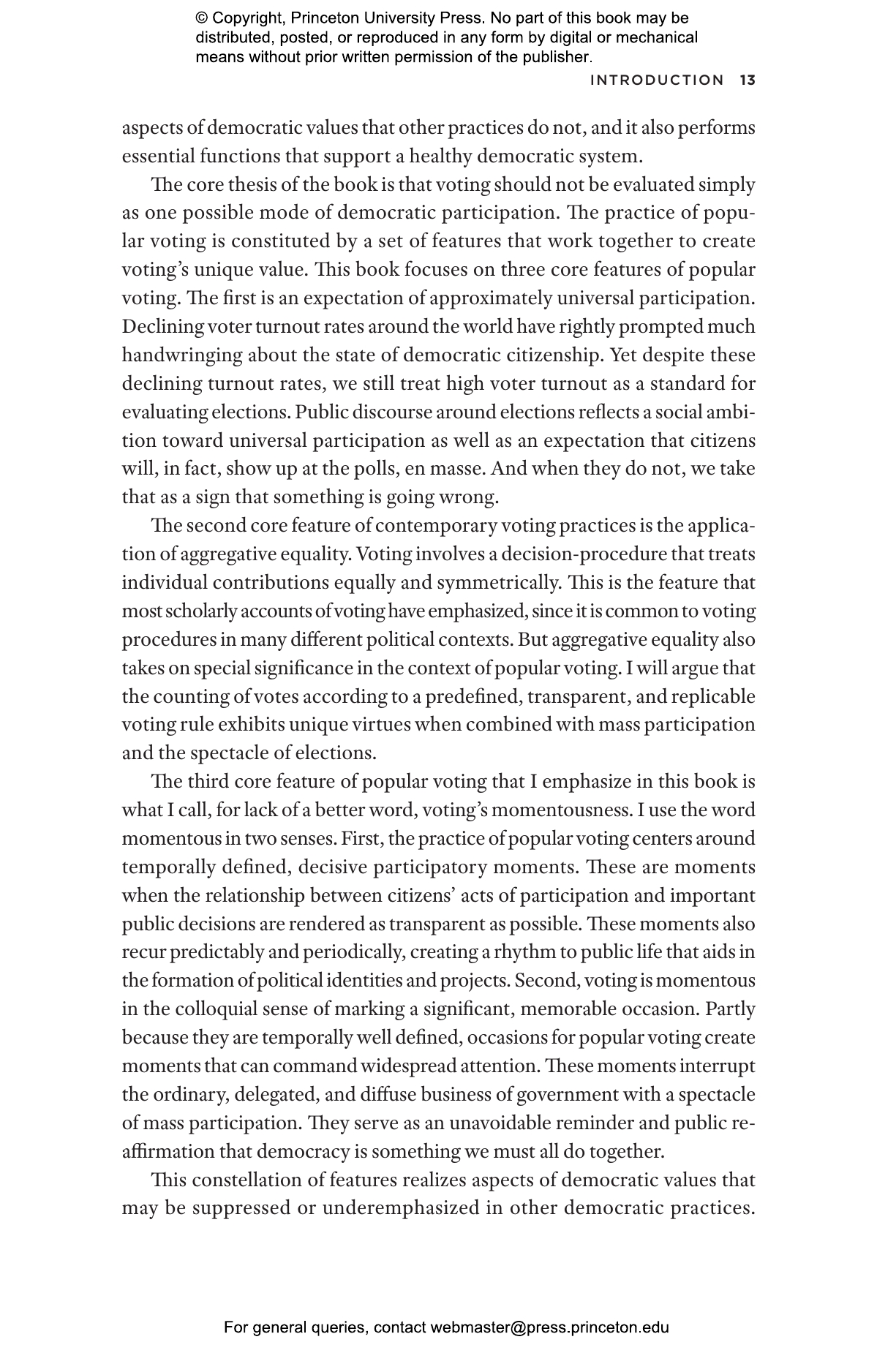 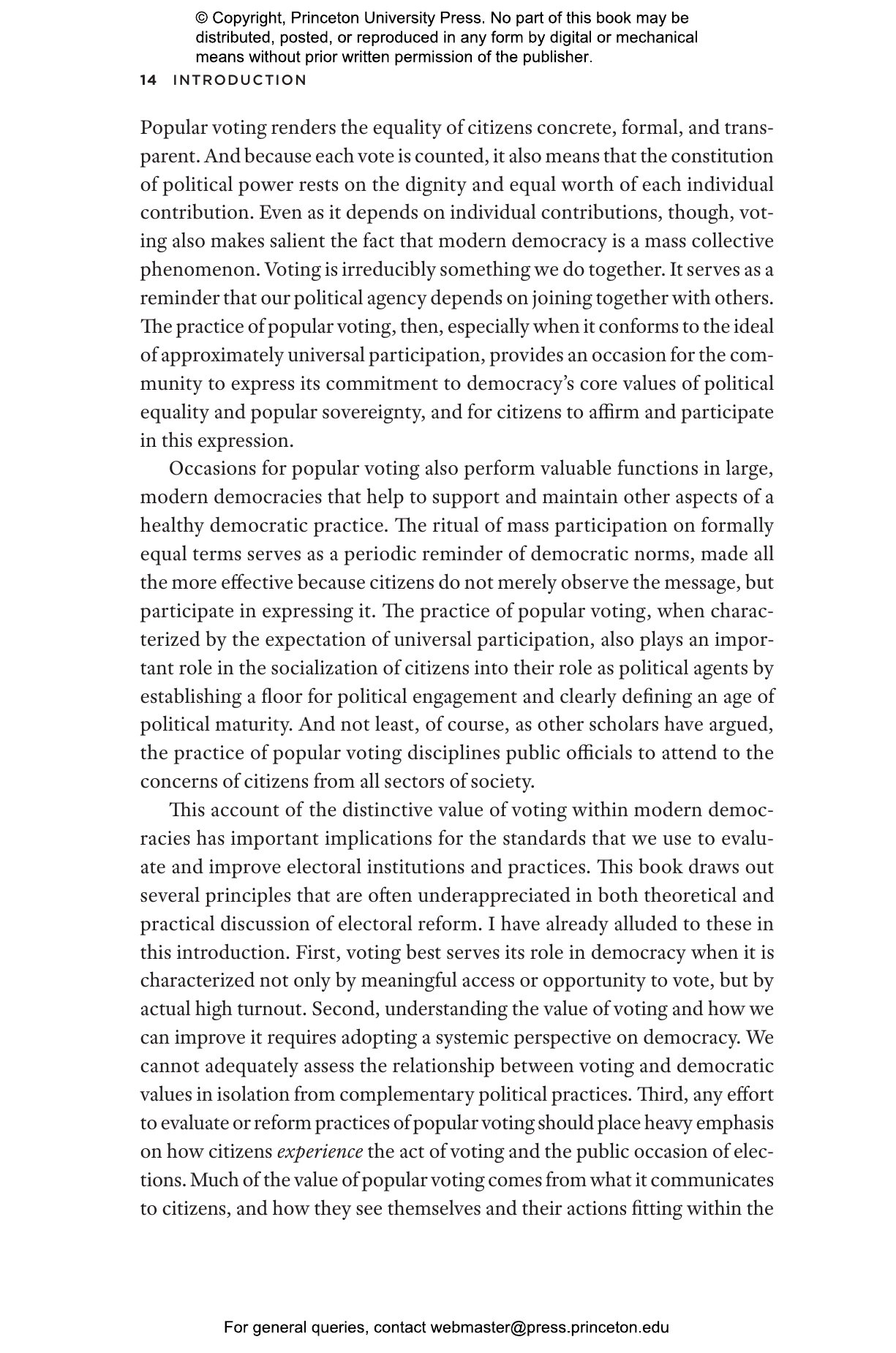 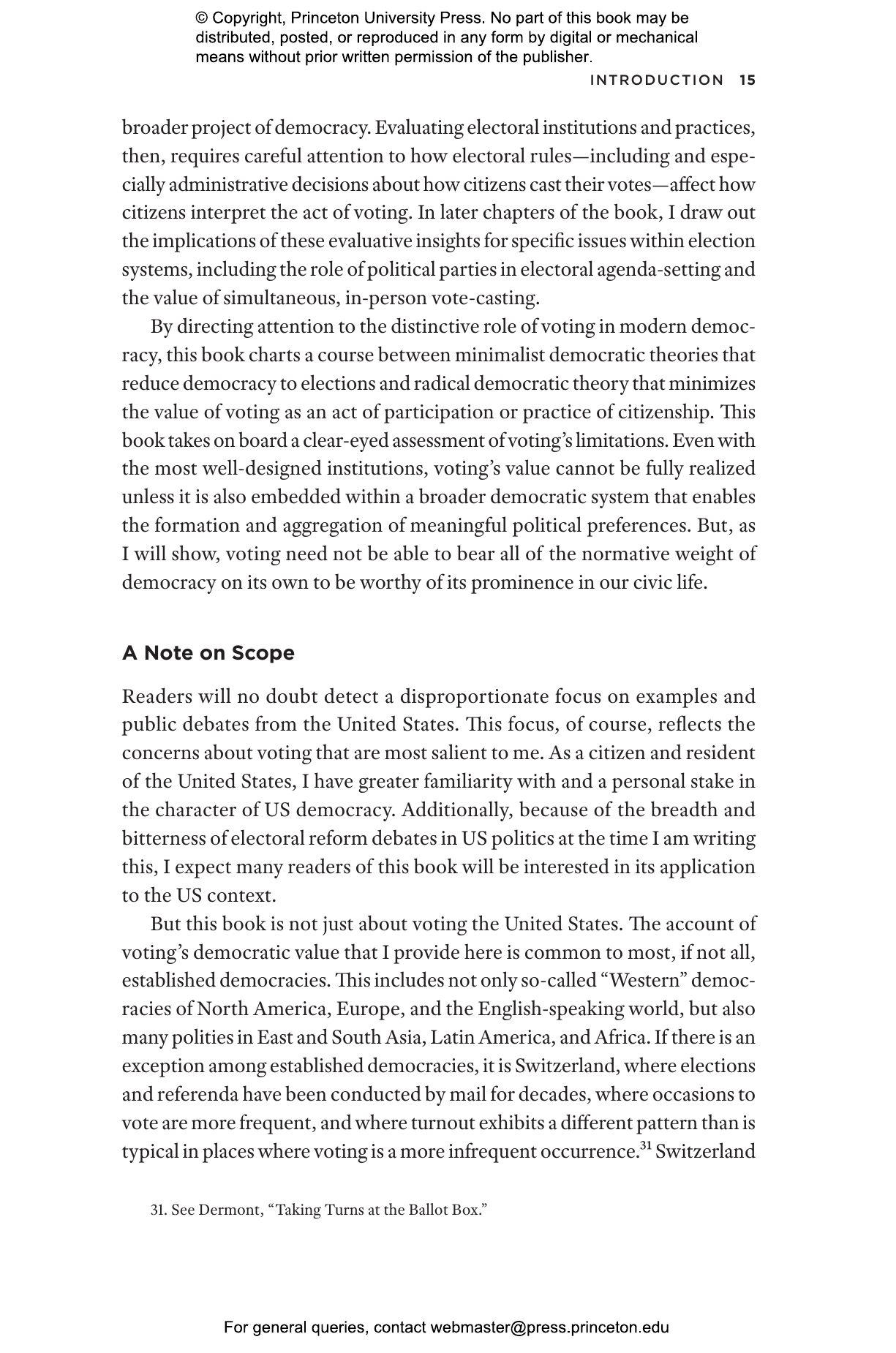 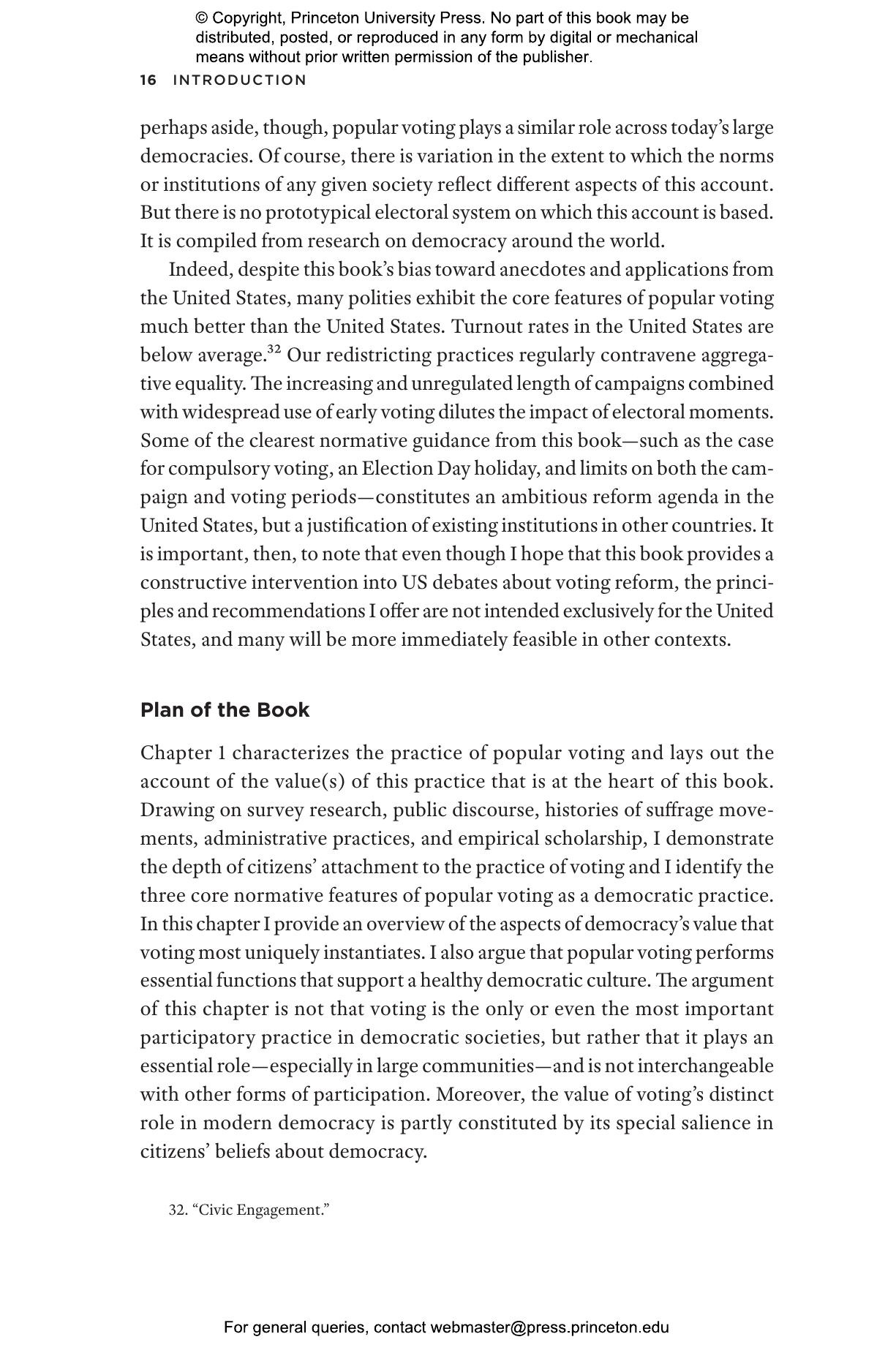 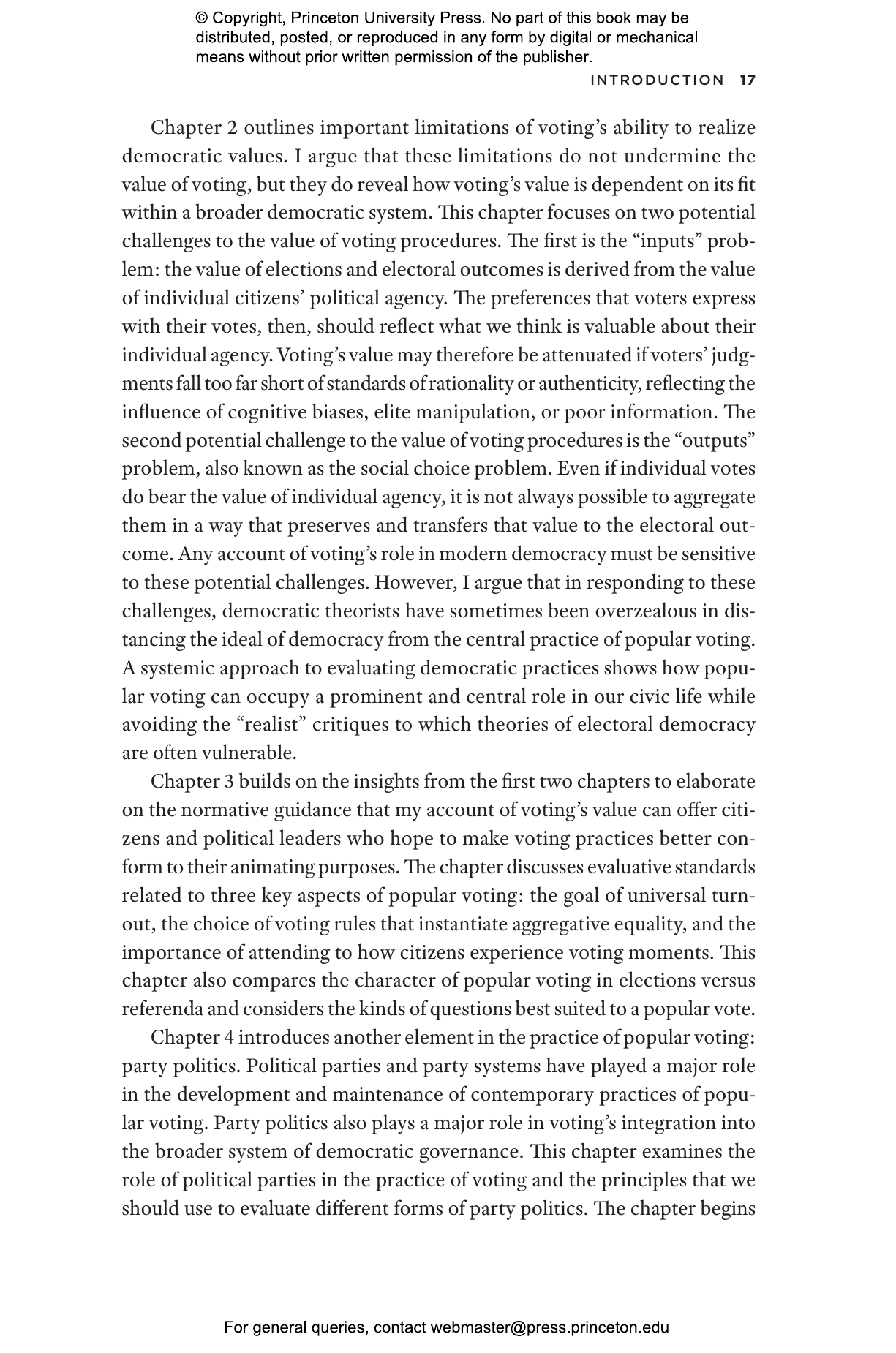 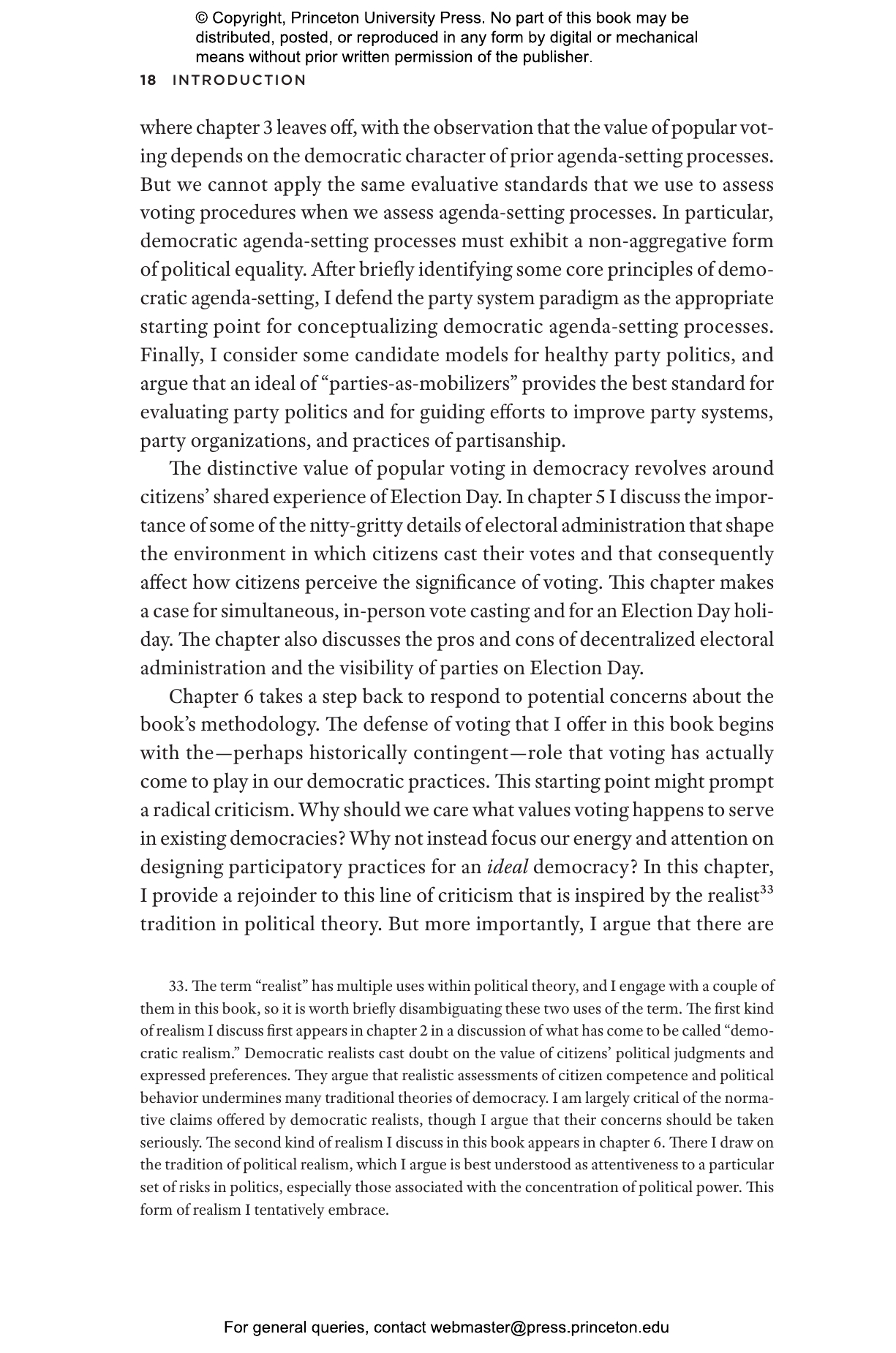 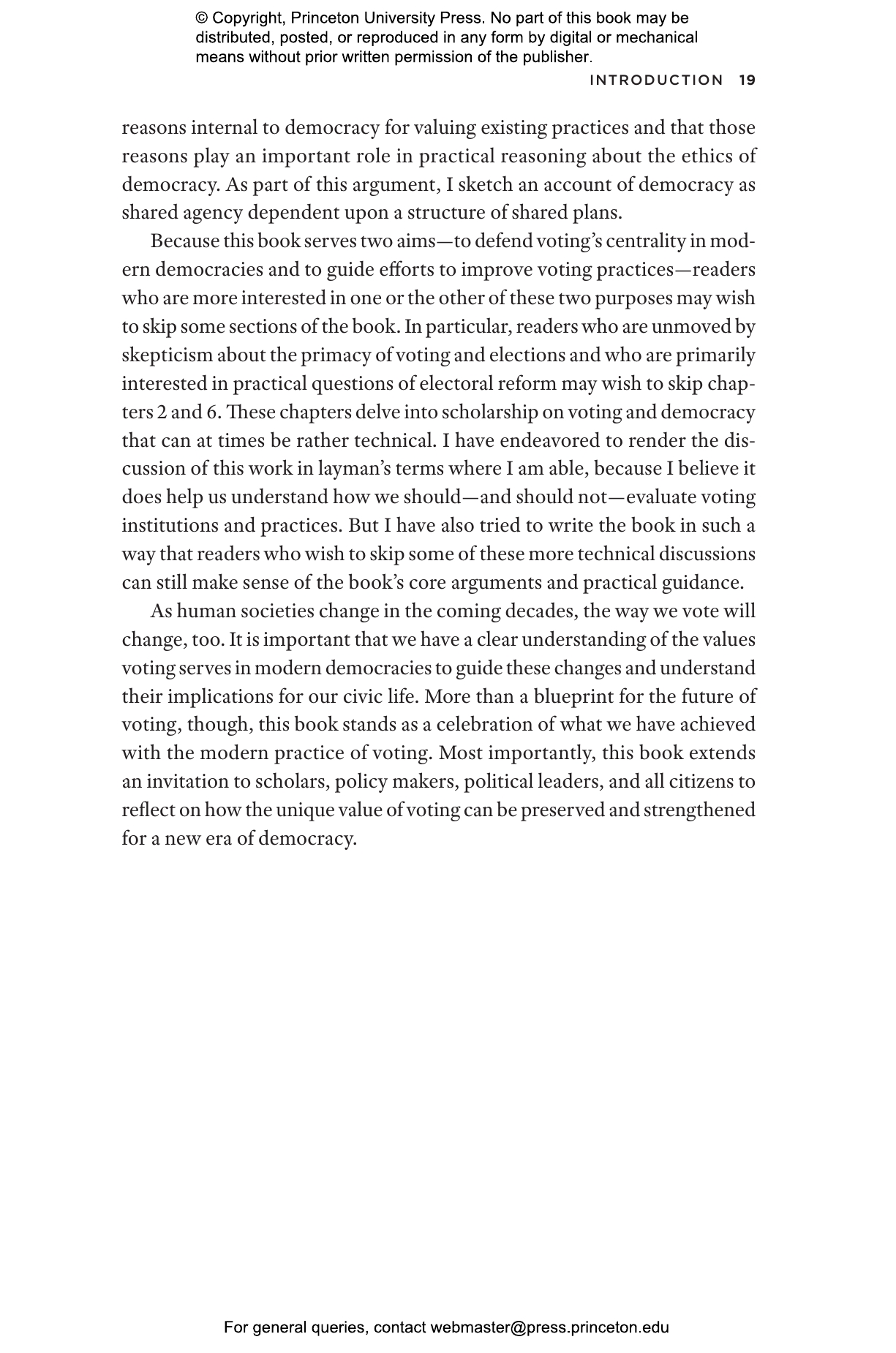 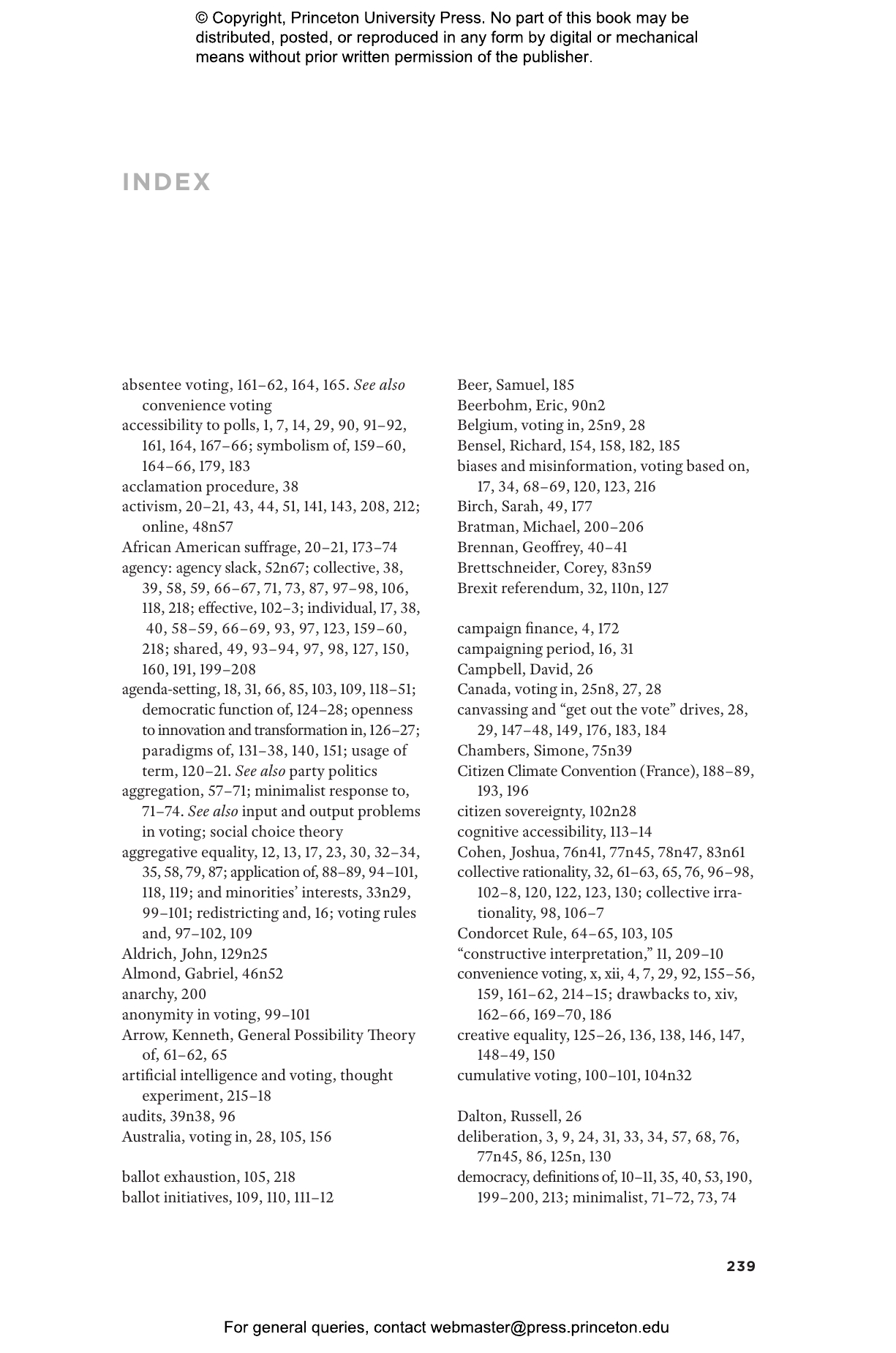 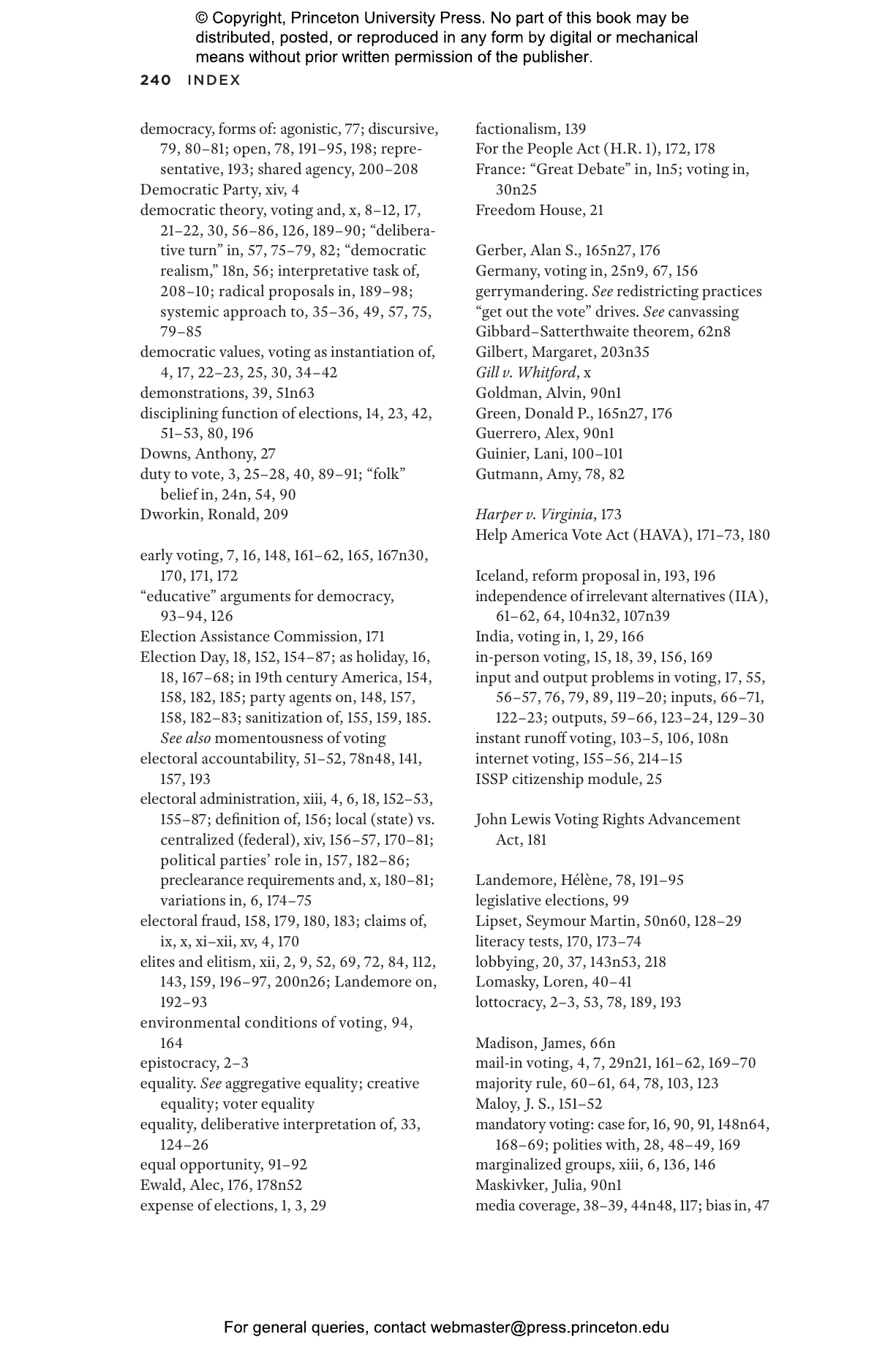 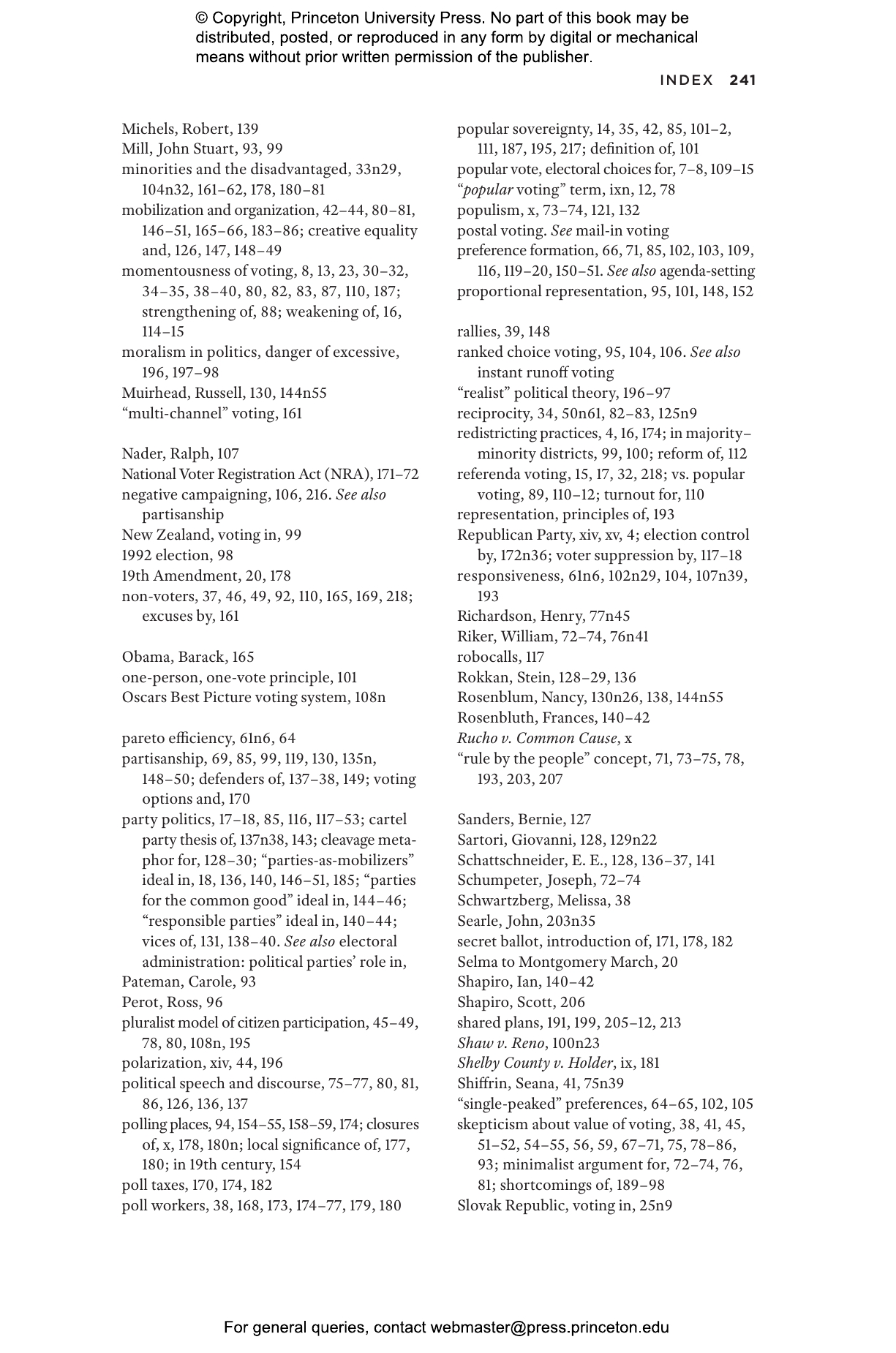 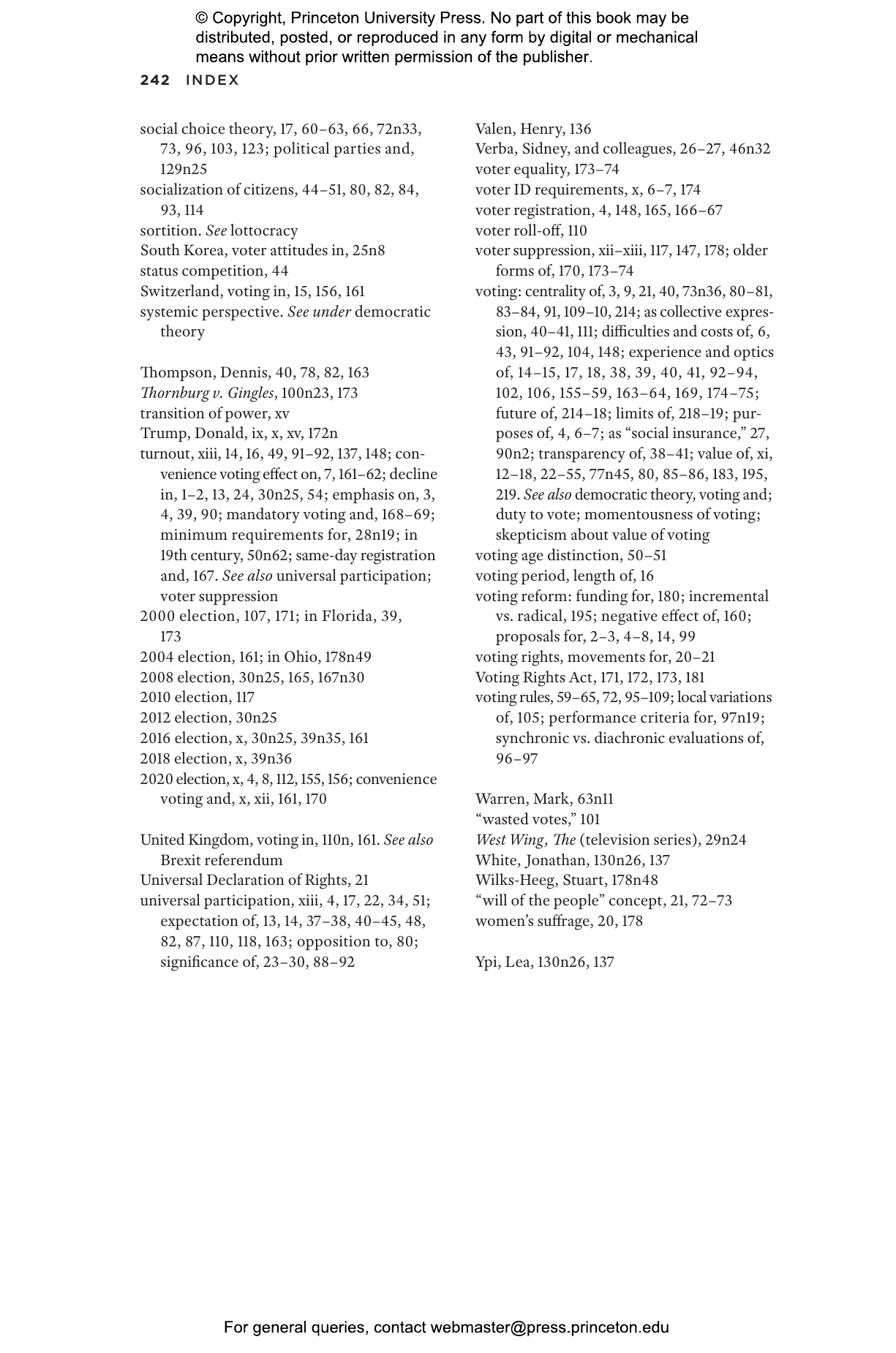 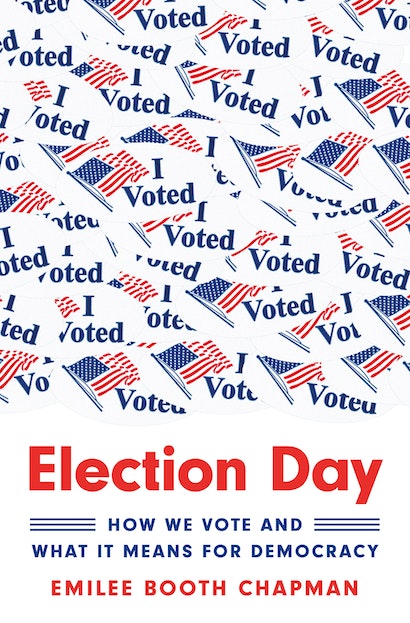 Voting is only one of the many ways that citizens can participate in public decision making, so why does it occupy such a central place in the democratic imagination? In Election Day, political theorist Emilee Booth Chapman provides an original answer to that question, showing precisely what is so special about how we vote in today’s democracies. By presenting a holistic account of popular voting practices and where they fit into complex democratic systems, she defends popular attitudes toward voting against radical critics and offers much-needed guidance for voting reform.

Elections embody a distinctive constellation of democratic values and perform essential functions in democratic communities. Election day dramatizes the nature of democracy as a collective and individual undertaking, makes equal citizenship and individual dignity concrete and transparent, and socializes citizens into their roles as equal political agents. Chapman shows that fully realizing these ends depends not only on the widespread opportunity to vote but also on consistently high levels of actual turnout, and that citizens’ experiences of voting matters as much as the formal properties of a voting system. And these insights are also essential for crafting and evaluating electoral reform proposals.

By rethinking what citizens experience when they go to the polls, Election Day recovers the full value of democratic voting today.

“What is the purpose of voting in a democracy? Election Day provides a brilliant and original answer: the function of voting is embedded in and achieved through popular beliefs about the meaning and value of voting. Democracies are sustained when ordinary citizens believe they are acting together as a collective democratic agent on election day. This is an excellent book, and it makes an important contribution to democratic theory.”—Simone Chambers, University of California, Irvine

“Against the current vogue among political theorists for selection by lot, Chapman convincingly defends the essential character of voting and elections for democracies. She offers a bracing defense of in-person, temporally limited voting, and shows that convenience voting entails a serious cost to the momentousness of Election Day. There is much to admire and learn from in her book, and it should attract a wide audience.”—Melissa Schwartzberg, New York University

“In this important book, Emilee Booth Chapman focuses us on one fundamental moment in our lives as citizens: the casting of a ballot. She expertly explains how this singular action on the momentous occasion of Election Day captures the wider values of democracy by exemplifying our status as equals and joining us with the wider democratic community.”—Corey Brettschneider, author of The Oath and the Office: A Guide to the Constitution for Future Presidents

“At a time when the right to vote is under threat in America, Election Day offers a crucial case for putting voting at the center of democratic theory. Brimming with insight, Chapman’s book makes significant contributions to our understanding of how voting can achieve its true promise of political equality.”—Lee Drutman, author of Breaking the Two-Party Doom Loop: The Case for Multiparty Democracy in America