A concise history of medieval Scandinavia 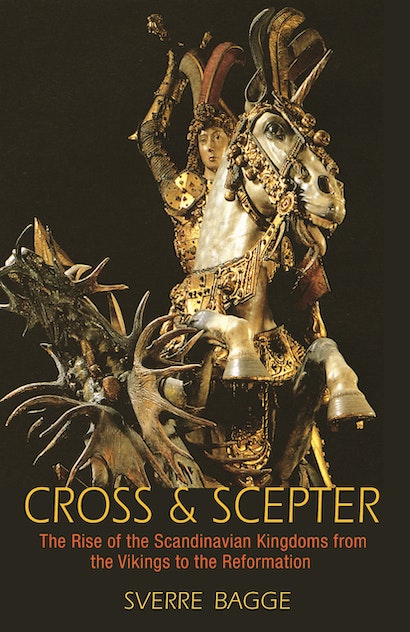 Christianity and European-style monarchy—the cross and the scepter—were introduced to Scandinavia in the tenth century, a development that was to have profound implications for all of Europe. Cross and Scepter is a concise history of the Scandinavian kingdoms from the age of the Vikings to the Reformation, written by Scandinavia’s leading medieval historian. Sverre Bagge shows how the rise of the three kingdoms not only changed the face of Scandinavia, but also helped make the territorial state the standard political unit in Western Europe. He describes Scandinavia’s momentous conversion to Christianity and the creation of church and monarchy there, and traces how these events transformed Scandinavian law and justice, military and administrative organization, social structure, political culture, and the division of power among the king, aristocracy, and common people. Bagge sheds important new light on the reception of Christianity and European learning in Scandinavia, and on Scandinavian history writing, philosophy, political thought, and courtly culture. He looks at the reception of European impulses and their adaptation to Scandinavian conditions, and examines the relationship of the three kingdoms to each other and the rest of Europe, paying special attention to the inter-Scandinavian unions and their consequences for the concept of government and the division of power.

Sverre Bagge is professor emeritus of medieval history at the University of Bergen in Norway. His books include Kings, Politics, and the Right Order of the World in German Historiography.

"Bagge, one of the world's pre-eminent medieval historians, offers an introductory survey of early Scandinavian history that will be a welcome addition in the classroom. . . . Insightful, in-depth, and authoritative . . . Bagge's scholarly work will be of great use to those with interest in this oft-forgotten civilization."—Publishers Weekly

"Using clear language and avoiding narrowly academic concerns, Cross and Scepter is accessible to a broad audience. It will be useful to specialists wanting a regional perspective, but it also offers an excellent general overview for anyone curious about medieval Scandinavia after the Viking age."—Danny Yee, Danny Reviews

"Bagge presents his research in this thought-provoking work, masterfully weaving together the complex formation of Scandinavian states in an informative yet entertaining fashion that takes readers through the beginning of state formation in the Viking Age to the Reformation and its effects on Scandinavia. . . . Although the work is concise, Bagge's ability to present a detailed, well-researched history makes this an enjoyable read for general readers and scholars alike."—Choice

"With apparent ease, [Bagge] conflates a great range of details from a variety of sources into a well-readable outline of the complex political interrelations of Denmark, Norway, and Sweden. . . . [His] present book is likely to become a popular primer for students."—Jan Alexander van Nahl, Mediaevistik

"This book demonstrates the mastery Sverre Bagge has acquired through his immense and innovative work on state formation in Scandinavia. It will have enduring effects on future discussions because it is as peerless at describing and analyzing micro-processes as at integrating and comparing macro-processes from other parts of Europe."—Gerhard Althoff, University of Münster

"A tour de force. Cross and Scepter is a short, readable, and deeply learned introduction to the political and constitutional history of Scandinavia, written by Scandinavia's foremost medieval historian. No one else but Bagge could have achieved this with such apparent ease."—Patrick Geary, author of The Myth of Nations: The Medieval Origins of Europe

"A masterful survey of Scandinavian history in the Middle Ages. Bagge's writing has focus and drive without unduly skating over important details. The scholarship is superb, as one would expect from the leading Scandinavian medieval historian of his generation."—Anders Winroth, author of The Conversion of Scandinavia: Vikings, Merchants, and Missionaries in the Remaking of Northern Europe