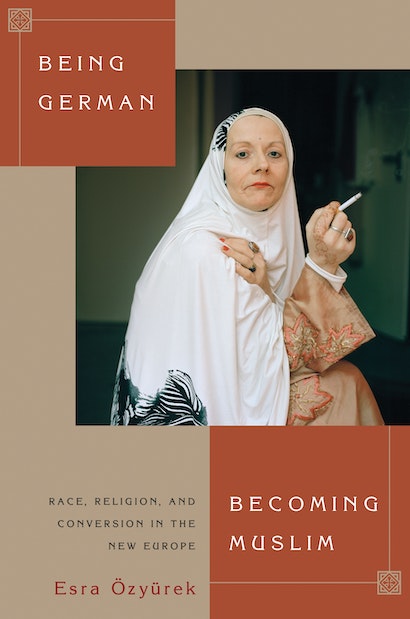 Every year more and more Europeans, including Germans, are embracing Islam. It is estimated that there are now up to one hundred thousand German converts—a number similar to that in France and the United Kingdom. What stands out about recent conversions is that they take place at a time when Islam is increasingly seen as contrary to European values. Being German, Becoming Muslim explores how Germans come to Islam within this antagonistic climate, how they manage to balance their love for Islam with their society’s fear of it, how they relate to immigrant Muslims, and how they shape debates about race, religion, and belonging in today’s Europe.

Esra Özyürek looks at how mainstream society marginalizes converts and questions their national loyalties. In turn, converts try to disassociate themselves from migrants of Muslim-majority countries and promote a denationalized Islam untainted by Turkish or Arab traditions. Some German Muslims believe that once cleansed of these accretions, the Islam that surfaces fits in well with German values and lifestyle. Others even argue that being a German Muslim is wholly compatible with the older values of the German Enlightenment.

Being German, Becoming Muslim provides a fresh window into the connections and tensions stemming from a growing religious phenomenon in Germany and beyond.

Esra Özyürek is an associate professor at the European Institute of the London School of Economics. She is the author of Nostalgia for the Modern: State Secularism and Everyday Politics in Turkey.

"The result of her research is a fascinating exploration of the dynamics of Islam in contemporary Germany, seen through the prism of its capital, Berlin. Her account provides a multifaceted profile of the many faces of Islam in one Western European country, and it offers readers a good sense of the diversity of contemporary Sunni Muslims in Germany. . . . [A]n excellent study."—Ursula King, Times Higher Education

"This book provides a judicious and well thought-through consideration of such contradictions and challenges in the lives of German Muslims and offers a fascinating discussion on blurring boundaries between Germans and Muslim, and the changing realities of European identity."—Dr. Digdem Soyaltin, Turkish Review

"This book is remarkable."—Ruth Mandel, History and Anthropology

"Özyürek's Being German, Becoming Muslim makes a welcome and distinctive contribution to—as the subtitle sums up—the study of Race, religion and conversion in the New Europe."—Nasar Meer, History and Anthropology

"An engaging, poignant study of how the different paths taken by converts converge in life-long, collective practices of self-pedagogy that involve learning how to negotiate German secular-Christian social norms and institutions."—Paul A. Silverstein, History and Anthropology

"A powerful work about the politics of inclusion and exclusion, security and threat, and recognition and fairness."—Joel Robbins, History and Anthropology

"A groundbreaking book that sheds much light on the lives of German converts to Islam, their ways of becoming Muslims and being German in the aftermath of conversion, their ambivalent relationships with immigrant Muslims, their strategies and struggles with respect to broadening a space of Islam, and even making it a German religion, and finally their curious relationship with the Salafis in Germany."—Erdem Dikici, Islam and Christian-Muslim Relations

"An excellent book and fills a very important gap in research on con- version to Islam in Europe. It will be of interest not only to academics and students in a diverse range of subject areas such as Islamic Studies, Sociology and Anthropology, but also to the wider public interested in Islam and the role of converts in shaping Islam in Europe."—Yafa Shanneik, Journal of Muslims in Europe

"Through thoughtful portraits, Özyürek explores the dilemmas faced by converts to Islam in Germany, where new Muslims are seeking nonethnic forms of the religion. She shows how these converts are finding an original way to be German through their Islam—a discovery that seems dangerous to some in the German state. A clear, convincing account of new Muslims in a European land."—John Bowen, author of Can Islam Be French?

"In a society where 'Muslim' has come to imply 'nonwhite immigrant,' and where German-Islam for many is a contradiction of identity, how do native German Muslims tread across these conundra? Özyürek's engaging and penetrating book leads us through the issues and reveals as much about Germany and a select group of Germans as it does about Islam."—Ruth Mandel, University College London

"This book offers both a call and a hope. Özyürek shows the tremendous role of Muslim converts in making Islam a German and European religion, and she calls converts to meet this challenge. She also presents the common hope of everyone 'living together' in unity, and her book is an important contribution to the achievement of this goal."—Tariq Ramadan, University of Oxford

"Given the current position of Islam in Europe, why do Europeans convert? What do the experiences of converts reveal about contemporary life, particularly in Germany? This rich book offers a new perspective and entrée into the discussion of religion in Europe."—Damani J. Partridge, University of Michigan

"Özyürek has written an engaging, highly readable portrait of German converts to Islam who have become key figures in public debates over the future of the country as a multireligious, multiethnic polity. The book serves as a primer on the history of Islam in Germany and plumbs the limits of European secularism. A pleasure to read."—Paul Silverstein, Reed College