A haunting, beautifully illustrated memorial to this iconic extinct bird 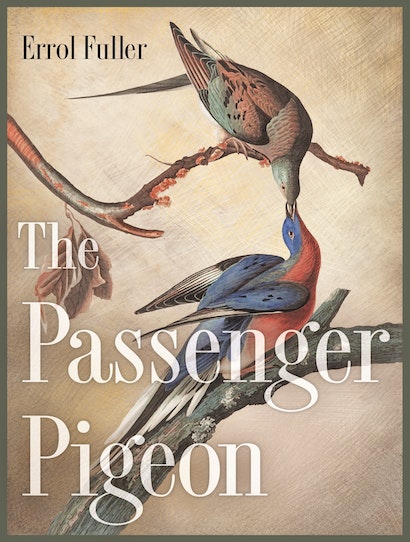 At the start of the nineteenth century, Passenger Pigeons were perhaps the most abundant birds on the planet, numbering literally in the billions. The flocks were so large and so dense that they blackened the skies, even blotting out the sun for days at a stretch. Yet by the end of the century, the most common bird in North America had vanished from the wild. In 1914, the last known representative of her species, Martha, died in a cage at the Cincinnati Zoo.

This stunningly illustrated book tells the astonishing story of North America’s Passenger Pigeon, a bird species that—like the Tyrannosaur, the Mammoth, and the Dodo—has become one of the great icons of extinction. Errol Fuller describes how these fast, agile, and handsomely plumaged birds were immortalized by the ornithologist and painter John James Audubon, and captured the imagination of writers such as James Fenimore Cooper, Henry David Thoreau, and Mark Twain. He shows how widespread deforestation, the demand for cheap and plentiful pigeon meat, and the indiscriminate killing of Passenger Pigeons for sport led to their catastrophic decline. Fuller provides an evocative memorial to a bird species that was once so important to the ecology of North America, and reminds us of just how fragile the natural world can be.

Published in the centennial year of Martha’s death, The Passenger Pigeon features rare archival images as well as haunting photos of live birds.

Errol Fuller is an acclaimed artist and writer, and a world authority on bird and animal extinction. His many books include Lost Animals: Extinction and the Photographic Record (Princeton), Extinct Birds, and Dodo: From Extinction to Icon.

"Lavishly illustrated with rare photographs of the birds. . . . This book provides a general introduction to the history of the passenger pigeon through its collection of rare photographs and other visual materials that most people have not seen before."—Devorah Bennu, The Guardian

"Visually beautiful. . . . Gives a fine account of the species, its biology and its demise."—Adrian Barnett, New Scientist

"A handsome, well-produced volume concentrating on paintings and photographs of the long-lost birds."—Rob Hardy, Columbus Dispatch

"A beautifully illustrated, elegantly written 'celebration' of the passenger pigeon and the artists who illustrated and photographed the species. . . . It is a haunting tale, and if you want a readable, engrossing but not lengthy account, I highly recommend this book."—Donna Schulman, 10,000 Birds

"Informative. . . . A celebration of this departed species through a mix of prose, paintings and photographs. . . . Filled with interesting tidbits."—Herb Wilson, Portland Press Herald

"A timely reminder of just how tenuous life can be for a species, regardless of how numerous they might be. This hardback book is beautifully illustrated. Mr. Fuller has put together a complete natural history of the passenger pigeon drawing upon historical illustrations, photographs, specimens, poems, ornithological journal articles and historical accounts."—Penny Miller, A Charm of Finches

"A must have for anyone with an interest in this species."—Ian Paulsen, Birdbooker Report

"Beautifully illustrated, this easy-to-read book will appeal to anyone who wishes to understand the concept of extinction."—Jennifer J. Meyer, Orange County Register

"From start to finish, the text is informative and entertaining and the photos and artwork are fascinating. Whether you've studied the Passenger Pigeon for years or haven't even heard of the species, I would highly recommend this book."—Rob Ripma, Nutty Birder

"Beautifully illustrated, including rare archival images as well as haunting photographs of live birds, this is an evocative memorial to one of the great icons of extinction."—Leslie Geddes-Brown, Country Life

"If a picture is worth a thousand words, then Errol Fuller's slim book, The Passenger Pigeon, is surely stuffed full of them. . . . It will probably appeal to younger readers, it is a fast read and it could be a satisfying companion volume to the other two passenger pigeon books that have been recently published."—Grrl Scientist

"The most visually beautiful [of recently published books on the passenger pigeon] is Errol Fuller's The Passenger Pigeon, which gives a fine account of the species, its biology and its demise."—Adrian Barnett, New Scientist

"[It] is THE monograph for the passenger pigeon. I imagine everyone would learn something from this book. I personally was left with a feeling that we should not stand idle and allow mankind to eradicate any other living species. An excellent read, recommended."—Mike King, Gloster Birder

"Written with both clarity and feeling. Most impressive is the breadth and depth of research crammed into what is a relatively slim volume. . . . A masterful summary of what we know about this remarkable bird. To read it is a joy, but one tinged with sadness and regret."—Andy Stoddart, Birdwatch

"I would highly recommend reading The Passenger Pigeon by Errol Fuller. . . . Beautifully illustrated."—David Lewis, Birds from Behind

"The Passenger Pigeon is an excellent introduction to this bird, what made it so special, and the tragedy of its extinction. If you want to learn about the Passenger Pigeon, or just enjoy the art and photographs, then I'd highly recommend it."—Grant McCreary, Birder's Library

"This is a book that should be on every reader's shelf as a reminder as to what we have missed; and to help ensure such an avian tragedy does not occur again."—David Saunders, Bird Watching

"[I]f you want to learn more about the Passenger Pigeons, this is a great book to have and to share."—North Durham Nature Newsletter

"The heartbreaking illustrated history of a bird that, having once numbered in the billions, vanished from the planet in 1914. On the centenary of the species' extinction Fuller, an expert on extinct birds, reflects on what we lost."—Globe and Mail

"A book about a long extinct bird could easily have been a dry, academic tome full of dull facts and figures, but Errol Fuller has managed to avoid this, and instead has produced an engaging book to fire the imagination, to encourage empathy with Martha, alone in her cage for the last four years of her life, to provoke outrage that the species was driven to extinction, and above all, a desire to fight to prevent the same fate befalling others."—Andy Mackay, Grebe

"Passenger Pigeon takes just the opposite approach. Though there is an informative and gracefully written text, this handsome volume tells its stories most eloquently in pictures."—Rick Wright, ABA Blog

"Writing in a clear, conversational tone, artist/writer Fuller highlights important aspects of this bird's natural history and its remarkable downhill spiral into oblivion. He provides fascinating accounts of the last wild birds; of ‘Martha,' the last of her species, who died in the Cincinnati Zoo; and historical testimony from people who observed the birds' enormous flocks firsthand. Illustrated with numerous historical photographs and exquisite artwork (modern and period), this lasting tribute to one of the most magnificent birds to have ever lived will interest anyone who cares about conservation of the natural world."—Choice

"In The Passenger Pigeon, Erroll Fuller brings his artist's eye to a recently popular, much-covered, yet little-understood phenomenon. . . . Fuller's vivid account is the one new book on the species you must buy."—Living Bird Magazine

"It is easy to read and thought-provoking, and will be of interest to anyone concerned about conservation today."—Ian Woodward, BTO News

"Fuller's book will appeal to a much larger audience and is worth the price just for the photos and illustrations. . . . The Passenger Pigeon should make us vow to never lose another species because of our own greed or neglect."—D.R.K., Wildlife Activist