From one of today's most distinguished critics, a beautifully written exploration of one of the twentieth century's most important literary critics 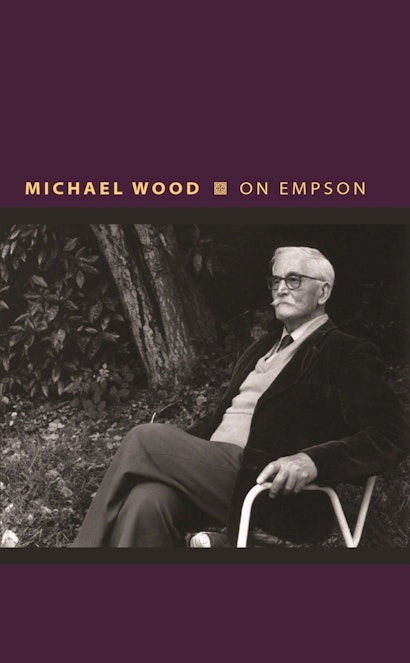 Are literary critics writers? As Michael Wood says, “Not all critics are writers—perhaps most of them are not—and some of them are better when they don’t try to be.” The British critic and poet William Empson (1906–84), one of the most important and influential critics of the twentieth century, was an exception—a critic who was not only a writer but also a great one. In this brief book, Wood, himself one of the most gifted writers among contemporary critics, explores Empson as a writer, a distinguished poet whose criticism is a brilliant literary performance—and proof that the act of reading can be an unforgettable adventure.

Drawing out the singularity and strength of Empson’s writing, including its unfailing wit, Wood traces the connections between Empson’s poetry and criticism from his first and best-known critical works, Seven Types of Ambiguity and Some Versions of Pastoral, to later books such as Milton’s God and The Structure of Complex Words. Wood shows why this pioneer of close reading was both more and less than the inventor of New Criticism—more because he was the greatest English critic since Coleridge, and didn’t belong to any school; and less because he had severe differences with many contemporary critics, especially those who dismissed the importance of an author’s intentions.

Beautifully written and rich with insight, On Empson is an elegant introduction to a unique writer for whom literature was a nonstop form of living.

Michael Wood is professor emeritus of comparative literature at Princeton University and the author of many books, including Yeats and Violence, Alfred Hitchcock: The Man Who Knew Too Much, and The Magician's Doubts: Nabokov and the Risks of Fiction (Princeton). He is a regular contributor to the New York Review of Books and the London Review of Books. He lives in Princeton.

"Wood's On Empson offers the most fluent guidance imaginable to the genius and the ingenuity of the man."—David Bromwich, New York Review of Books

"There couldn't be a more seductive partnership: Wood’s sidelong, subtle sentences, both understated and exhaustive, reflecting on Empson’s brisk and thrilling originality. Returning to Empson is always a pleasure, but so too is watching Wood read."—Frances Wilson, Times Literary Supplement

"The trick of Wood's book is to subject Empson’s work to the same kind of collaborative, close reading to which Empson subjects Shakespeare, Milton and Donne. In its most enthralling passages, Wood’s own writing participates in Empson’s critical creativity, providing an additional layer of interpretation, and constructing a critique of critique itself."—David Hawkes, Times Literary Supplement

"A brilliant introduction to one of the most original and beguiling intellects of the 20th century."—Michael Dirda, Washington Post

"An elegant and concise study of the great British literary critic William Empson (1906-1984). . . . If we come away with one thing from On Empson, it is the reminder, in the age of STEM courses, of just how much poetry matters—matters not on ethical or political grounds but simply for its own sake, for its exposure of the possibilities of the language that we use every waking moment of every day without taking into account its astonishing possibilities for knowledge, power, and, especially, pleasure."—Marjorie Perloff, Weekly Standard

"Part of the dexterity of Wood's own critical idiom lies in using the resources of the colloquial register to say just enough, leaving us to complete and digest the thought. His stylish brevity avoids the dogmatising implicit in all attempts to turn an observation into a theory . . . Wood even manages to make Milton’s God (1961), Empson’s grumpiest, most obsessive book, seem attractive . . . An appropriately subtle yet spirited introduction to the seductive power of a particular form of literary criticism."—Stefan Collini, The Guardian

"An excellent introduction to a figure whose legacy we still haven't quite worked out how to use . . . a mellow and appreciative study, rich in casually enlightening phrases dropped in passing, with a nice–and Empsonian–mixture of subtlety and a conversational style . . . this is a fine study that demonstrates how literary critics can be a pleasure to read and it earns its place in the Princeton series 'Writers on Writers'."—Peter Swaab, Daily Telegraph

"On Empson [is] a small capstone to a distinguished career of commentary on poetry, novels, and film."—William H. Pritchard, Hudson Review

"Michael Wood's reflections on Empson celebrate his unusual genius, focusing on the wit and nuanced thinking of both his criticism and poetry. Wood is the best expositor of Empson's poetry to date, and this book is a fine exhibit of Wood's own brilliance as a critic."—Paul H. Fry, author of William Empson: Prophet Against Sacrifice

"On Empson is a work of learning, reflection, grace, and wit. It will be the go-to volume for anyone who wants to get a sense of William Empson's career and why it matters. Michael Wood celebrates Empson as a writer and a thinker, deftly showing how his prose and poetry join in a single enterprise. Those coming new to the work will find this an invaluable guide; and already confirmed admirers will delight in Wood's subtle account of one of the great literary figures of the modern period."—Seamus Perry, University of Oxford

"It's thrilling to experience Wood's mind at work on Empson's, and Empson's mind at work on Wood's. Wood's style is engaging and his readings of Empson's prose and poetry are clear, compelling, persuasive, and fresh. I enjoyed On Empson from first page to last."—Lisa Rodensky, Wellesley College