An ambitious global history that fundamentally alters our understanding of Malthus 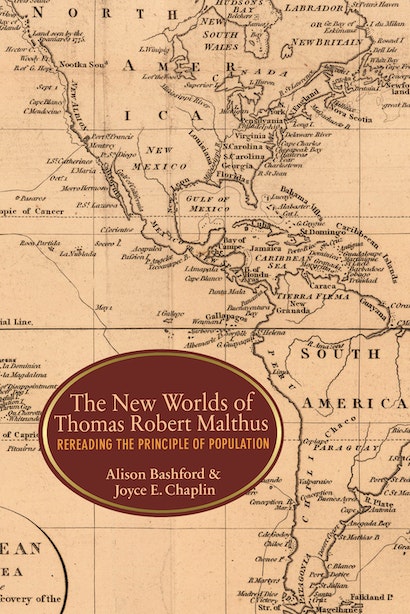 The New Worlds of Thomas Robert Malthus is a sweeping global and intellectual history that radically recasts our understanding of Malthus’s Essay on the Principle of Population, the most famous book on population ever written or ever likely to be. Malthus’s Essay is also persistently misunderstood. First published anonymously in 1798, the Essay systematically argues that population growth tends to outpace its means of subsistence unless kept in check by factors such as disease, famine, or war, or else by lowering the birth rate through such means as sexual abstinence.

Challenging the widely held notion that Malthus’s Essay was a product of the British and European context in which it was written, Alison Bashford and Joyce Chaplin demonstrate that it was the new world, as well as the old, that fundamentally shaped Malthus’s ideas. They explore what the Atlantic and Pacific new worlds—from the Americas and the Caribbean to New Zealand and Tahiti—meant to Malthus, and how he treated them in his Essay. Bashford and Chaplin reveal how Malthus, long vilified as the scourge of the English poor, drew from his principle of population to conclude that the extermination of native populations by European settlers was unjust.

Elegantly written and forcefully argued, The New Worlds of Thomas Robert Malthus relocates Malthus’s Essay from the British economic and social context that has dominated its reputation to the colonial and global history that inspired its genesis.

Alison Bashford is the Vere Harmsworth Professor of Imperial and Naval History at the University of Cambridge and a fellow of Jesus College. Her books include Global Population: History, Geopolitics, and Life on Earth. Joyce E. Chaplin is the James Duncan Phillips Professor of Early American History at Harvard University. Her books include The First Scientific American: Benjamin Franklin and the Pursuit of Genius.

"In their important and persuasive new book, Bashford and Chaplin argue that, far from being an uncaring figure with tunnel vision, Malthus, properly understood, anticipates some of the most pressing international circumstances of our time. . . . [A] provocative and profound work."—Mark S. Micale, Times Literary Supplement

"Penetrating reappraisal of the philosopher's Essay on the Principle of Population."—Barbara Kiser, Nature

"A towering publication of prime intellect if ever there was one."—David Marx Book Reviews

"Overall, an interesting, articulate work that effectively argues for placing Malthus in the context of world history."—Choice

"A bold, original and fascinating social and political history of an idea . . . the best text on understanding Malthus in a twenty-first–century globalized era."—Kate Fullagar, American Historical Review

"The authors' research adds considerably to our understanding of what Malthus was about in his three-decade-long project of elaborating and illustrating the principle of population. . . . Very insightful."—Dennis Hodgson, Population and Development Review

"A richly sourced and finely detailed account of the writing, reading, and interpretation of Thomas Robert Malthus's Essay on the Principle of Population. . . . This is important work."—Daniel J. Hammond, EH.Net

"Timely. . . . This collaboration of an Australian and an American, each located in a Cambridge that is separated by an ocean, has rendered Malthus in a new light."—Philip D. Morgan, Bulletin of the History of Medicine

"A timely reappraisal of Malthus's writing on population within the context of eighteenth and early nineteenth century colonial expansion."—Jim Scown, British Society for Literature and Science

"A richly contextualized and deeply researched portrait of Thomas Robert Malthus and his famously bleak analysis of the limits to population growth. This Malthus is steeped in the travel literature on the new worlds of the Americas and the Pacific, entangled in the West Indies sugar and slave trades, and in the thrall of theories of human development highly prejudicial to indigenous peoples under threat by European settlers. His Essay must now be read with new eyes."—Lorraine Daston, Max Planck Institute for the History of Science

"This remarkable new book puts Malthus's original arguments about population growth and scarce resources back in their historical contexts of global ecologies and worldwide experiences of colonial and economic change. An indispensable guide to the structure of the environmental crisis and its long-term genealogy."—Simon Schaffer, coeditor of The Brokered World: Go-Betweens and Global Intelligence, 1770-1820

"An entirely new way of reading the most famous book on population ever written. With remarkable force and erudition, Bashford and Chaplin show that no aspect of European history can be considered in isolation from the irrepressible European quest to understand—and master—the entire inhabited world. In their hands, Malthus emerges anew as a major intellectual presence."—Anthony Pagden, author of The Enlightenment: And Why It Still Matters

"With this ambitious book, Bashford and Chaplin have succeeded in placing Malthus in the context of global history. A significant and original addition to the scholarly literature."—Donald Winch, author of Malthus: A Very Short Introduction

"This is the most important new reading of the life and work of Malthus in a generation. The book is beautifully written and powerfully conceived, and the scholarship is impeccable. Bashford and Chaplin offer a paradigm-changing interpretation of Malthus."—Robert J. Mayhew, author of Malthus: The Life and Legacies of an Untimely Prophet