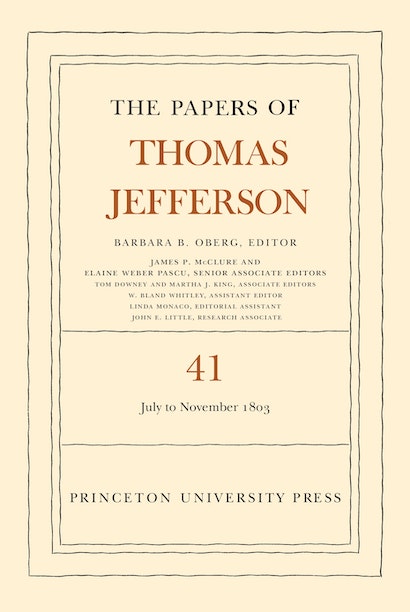 The Louisiana Purchase dominates the months covered in this volume. Jefferson departs for Monticello to enjoy a needed respite after the busy three and a half months he has just spent in the nation’s capital. Shortly before leaving Washington, he has a last meeting with his cabinet, after which he issues a proclamation to reconvene Congress on 17 October, three weeks early. It is the “great and weighty” business of the French government’s stunning offer to transfer all of the Louisiana Territory to the United States that necessitates this important gathering. The event brings Jefferson enthusiastic congratulations from his friends and fellow Republicans. With Jefferson’s great success, however, comes the reality of getting the agreement with France approved and implemented. The boundaries of the territory ceded are not even clear. In private letters to his trusted advisers, Jefferson discusses the proper course of action. Should both houses of Congress be called to consider the French offer? Is it prudent to make the substance of a treaty public? And perhaps most vexing, does this executive action require an amendment to the Constitution? Some Federalists criticize the plan, but an expansion of the nation’s territory, proponents argue, will raise America’s stature in the eyes of the world. With the widening of the country’s borders, Jefferson’s project to send an exploratory party westward seems even timelier. William Clark accepts Meriwether Lewis’s invitation to join the expedition, and on the last day of August Lewis begins his journey down the Ohio River, the building of his boat finally complete.

Barbara B. Oberg, senior research scholar at Princeton University, was general editor of The Papers of Thomas Jefferson from 1999 to 2014.