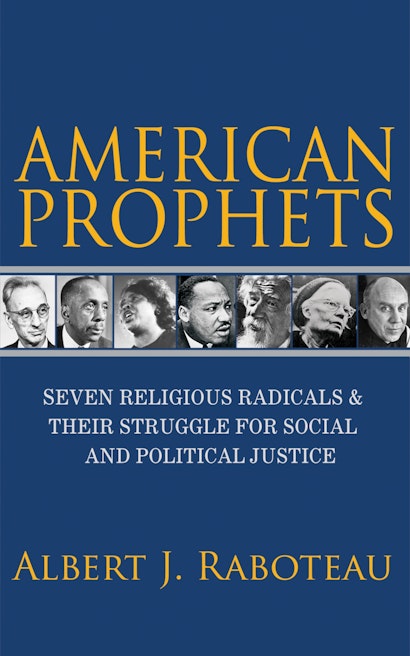 American Prophets sheds critical new light on the lives and thought of seven major prophetic figures in twentieth-century America whose social activism was motivated by a deeply felt compassion for those suffering injustice.

In this compelling and provocative book, acclaimed religious scholar Albert Raboteau tells the remarkable stories of Abraham Joshua Heschel, A. J. Muste, Dorothy Day, Howard Thurman, Thomas Merton, Martin Luther King, Jr., and Fannie Lou Hamer—inspired individuals who succeeded in conveying their vision to the broader public through writing, speaking, demonstrating, and organizing. Raboteau traces how their paths crossed and their lives intertwined, creating a network of committed activists who significantly changed the attitudes of several generations of Americans about contentious political issues such as war, racism, and poverty. Raboteau examines the influences that shaped their ideas and the surprising connections that linked them together. He discusses their theological and ethical positions, and describes the rhetorical and strategic methods these exemplars of modern prophecy used to persuade their fellow citizens to share their commitment to social change.

A momentous scholarly achievement as well as a moving testimony to the human spirit, American Prophets represents a major contribution to the history of religion in American politics. This book is essential reading for anyone who is concerned about social justice, or who wants to know what prophetic thought and action can mean in today’s world.

"Raboteau asks—and leaves for the reader to answer—whether last century's prophets for social justice can provide models for future action. This scholarly yet accessible primer to the role of faith in the lives of American activists challenges contemporary notions of the role in religion in politics, and argues that empathy is a critical first step in addressing the suffering of others."—Publishers Weekly

"The subjects [of American Prophets] knew one another and participated, often shoulder-to-shoulder, in events like the great southern civil rights marches and the anti-Vietnam War demonstrations of the 1960s. As important, they wrote, spoke, and guided the movements. Let the study of them together start with these concise yet weighty appraisals."—Ray Olson, Booklist

"Compelling and provocative. . . . A momentous scholarly achievement as well as a moving testimony to the human spirit, American Prophets represents a major contribution to the history of religion in American politics. This book is essential reading for anyone who is concerned about social justice, or who wants to know what prophetic thought and action can mean in today's world."—Rabbi Dov Peretz Elkins, JewishMediaReview

"Raboteau's admiration for these figures leaps off the pages and invites a hushed reverence. . . .American Prophetsinvites the reader closer to the kind of faith that insists on justice. At its best the book not only extends an invitation to see how figures of faith mobilized their communities, but reminds us that the prophetic spirit is still calling us to action."—Susan Haarman, Commonweal

"A powerful book about what faith in action truly means. Its underpinning of first-rate scholarship combined with eloquent analysis will compel many different audiences."—Nancy L. Roberts, Catholic News Service

"The book is recommended for students of American politics, religion and social movements. It could hardly have appeared at a better time."—Jeremy Rutledge, Post and Courier

"Raboteau brings his vast expertise to bear in these seven pithy profiles, moving back and forth between particular case studies and broader themes in American religion with an ease and authority that often eludes the junior scholar. . . . Compelling."—Heath W. Carter, Sociology of Religion

"Albert Raboteau is the legendary godfather of Afro-American religious studies. He also is one of the exemplary spiritual radicals of our time. This wise and courageous book solidifies both well-deserved reputations."—Cornel West

"Albert Raboteau's magnificent American Prophets is a book that will make our hearts soar. Courageous, wise, and deeply compassionate, Raboteau's prophets are political activists—Jews and Christians, blacks and whites, men and women—imbued with a deep faith in God and humanity. An inspiring journey into the inner lives of extraordinary human beings."—Susannah Heschel, author of The Aryan Jesus: Christian Theologians and the Bible in Nazi Germany

"Albert Raboteau has written a powerful book for these troubled times. With biographical sketches and insightful analyses, he has called forth ‘a cloud of witnesses' to illustrate the power of faith and courage in the ongoing confrontation with evil. This is a must-read for anyone who needs an example of faith in action. More importantly, it is a must-read for anyone willing to work for a better world."—Eddie S. Glaude Jr., author of Democracy in Black: How Race Still Enslaves the American Soul

"American Prophets addresses, beautifully and with great wisdom, issues and questions that have again jumped to the forefront of American consciousness. Raboteau is a wonderfully accessible and graceful writer, and his topic is riveting."—Cathleen Kaveny, author of Prophecy without Contempt: Religious Discourse in the Public Square

"Compelling. Raboteau renews our understanding of what prophetic thought—and calls to action—really look like."—Barbara Dianne Savage, author of Your Spirits Walk Beside Us: The Politics of Black Religion