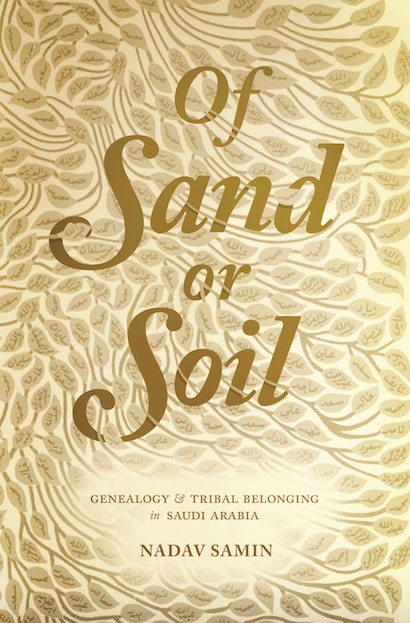 Why do tribal genealogies matter in modern-day Saudi Arabia? What compels the strivers and climbers of the new Saudi Arabia to want to prove their authentic descent from one or another prestigious Arabian tribe? Of Sand or Soil looks at how genealogy and tribal belonging have informed the lives of past and present inhabitants of Saudi Arabia and how the Saudi government’s tacit glorification of tribal origins has shaped the powerful development of the kingdom’s genealogical culture.

Nadav Samin presents the first extended biographical exploration of the major twentieth-century Saudi scholar Ḥamad al-Jāsir, whose genealogical studies frame the story about belonging and identity in the modern kingdom. Samin examines the interplay between al-Jāsir’s genealogical project and his many hundreds of petitioners, mostly Saudis of nontribal or lower status origin who sought validation of their tribal roots in his genealogical texts. Investigating the Saudi relationship to this opaque, orally inscribed historical tradition, Samin considers the consequences of modern Saudi genealogical politics and how the most intimate anxieties of nontribal Saudis today are amplified by the governing strategies and kinship ideology of the Saudi state.

Challenging the impression that Saudi culture is determined by puritanical religiosity or rentier economic principles, Of Sand or Soil shows how the exploration and establishment of tribal genealogies have become influential phenomena in contemporary Saudi society. Beyond Saudi Arabia, this book casts important new light on the interplay between kinship ideas, oral narrative, and state formation in rapidly changing societies.

"Of Sand or Soil is a pertinent, rich, and beautifully written book about Saudi Arabian identity politics. Samin offers anthropologists, historians, political scientists, and others the tools to analyze a contemporary Saudi debate in the field of genealogy and belonging. His book is, by all standards, a groundbreaking piece of academic research."—Marieke Brandt, American Ethnologist

"Samin has produced one of the best monographs on Saudi culture and society and their relationship with the state."—Jörg Matthias Determann, Comparative Islamic Studies

"An outstanding addition to the literature of modern Saudi Arabia that also serves to put the whole contemporary analysis of retribalization into a much broader context. Samin successfully demonstrates that despite religious, political, and economic forces that diminished tribal institutions, cross-pressures countered those trends, and in the process a culture of genealogy combined with a bureaucratic genealogical rule of governance to lead Saudis to assert tribal descent . . . and so establish their ancient roots in the Arabian Peninsula."—Calvin H. Allen, Jr., PhD, Middle East Media & Book Reviews

"Of Sand or Soil is guaranteed to set one thinking. . . . [I]t is a measure of the book's worth that it suggests several lines of inquiry. [Samin] is to be congratulated . . . on a very well-written book, [and] . . . to be commended for productive fieldwork [in Saudi Arabia] requiring moral stamina."—P. Dresch, American Historical Review

"The detailed historical and archival work and the deep ethnographic research shine throughout the book. . . . Of Sand or Soil is a welcome contribution to scholarship on Saudi Arabia, one that challenges the arguments of some of the most recent works in the field."—R. Bsheer, Arab Studies Journal

"Samin's book . . . forces us to see Saudi society with new eyes. It shatters many stereotypes abundant among people in the west and the Arab world about the kingdom and leads us to reconsider outdated anthropological myths. . . . An indispensible tool for better understanding Saudi Arabia."—S. Maisel, SOAS Bulletin

"An impressive piece of work. . . . Of Sand or Soil presents groundbreaking scholarship and as such, forms part of a growing trend of valuable in-depth studies on the kingdom."—J. E. Peterson, Bustan

"Nadav Samin offers the most in-depth and serious work on the politics of history and identity in Saudi Arabia, perhaps the most opaque country in the Arab world. Samin's framing of the issues is deeply learned and relies on personal and public archival documents as well as on fieldwork interviews with a wide range of Saudi individuals. The net effect is truly revelatory and sets a high bar for the study of the Middle East. This book is a must-read for all who are interested in the intertwining of history with ethnography, the dominant role the modern state plays in defining the politics of belonging and exclusion, and the various forms of cultural resistance to a government's agenda."—Bernard Haykel, Princeton University

"This significant book explains why tribal genealogies are important in contemporary Saudi Arabia. Samin draws on a wide range of theoretical approaches and argues that tribal genealogies remain resilient as a result of social and political changes related to such factors as the Saudi state, urbanization, and migration."—Madawi Al-Rasheed, London School of Economics and Political Science

"While there have long been studies published on the social and political significance of Middle Eastern genealogies, nothing has yet been written about people's preoccupations with them within the context of state consolidation in Saudi Arabia. Based on meticulous research, this book is innovative and original."—Gabriele vom Bruck, SOAS, University of London