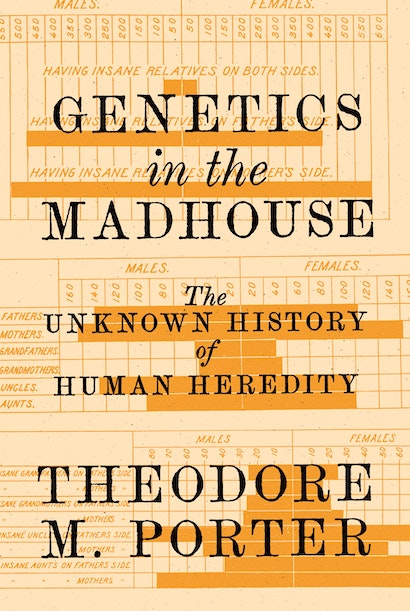 In the early 1800s, a century before there was any concept of the gene, physicians in insane asylums began to record causes of madness in their admission books. Almost from the beginning, they pointed to heredity as the most important of these causes. As doctors and state officials steadily lost faith in the capacity of asylum care to stem the terrible increase of insanity, they began emphasizing the need to curb the reproduction of the insane. They became obsessed with identifying weak or tainted families and anticipating the outcomes of their marriages. Genetics in the Madhouse is the untold story of how the collection and sorting of hereditary data in mental hospitals, schools for “feebleminded” children, and prisons gave rise to a new science of human heredity.

In this compelling book, Theodore Porter draws on untapped archival evidence from across Europe and North America to bring to light the hidden history behind modern genetics. He looks at the institutional use of pedigree charts, censuses of mental illness, medical-social surveys, and other data techniques — innovative quantitative practices that were worked out in the madhouse long before the manipulation of DNA became possible in the lab. Porter argues that asylum doctors developed many of the ideologies and methods of what would come to be known as eugenics, and deepens our appreciation of the moral issues at stake in data work conducted on the border of subjectivity and science.

A bold rethinking of asylum work, Genetics in the Madhouse shows how heredity was a human science as well as a medical and biological one.

Theodore M. Porter is Distinguished Professor of History and holds the Peter Reill Chair at the University of California, Los Angeles. His books include Karl Pearson: The Scientific Life in a Statistical Age, Trust in Numbers: The Pursuit of Objectivity in Science and Public Life, and The Rise of Statistical Thinking, 1820–1900 (all Princeton). He lives in Altadena, California.

"By following the technologies of paperwork and data collection, Porter has unearthed a radically new history of human genetics, one that evokes not the double helix but the humble filing cabinet."—Emily M. Kern, Science

"Fascinating but scary. Genetics in the Madhouse . . . uses date collection in psychiatric hospitals to show the stages when research straddles subjectivity and science."—Liz Else and Simon Ings, New Scientist

"[An] absorbing account of the role played by mental illness studies in gaining an early understanding of human heredity."—Robin McKie, The Observer

"Genetics in the Madhouse provides a fascinating examination of investigations of human heredity, conducted long before DNA could be studied in laboratories."—Glenn Altschuler, Philadelphia Inquirer

"Porter commands an impressive array of languages, and where his own knowledge falters, he has employed assistance to allow him to survey other sources that would otherwise have remained out of reach."—Andrew Scull, Brain Journal of Neurology

"Porter has read voluminously in the secondary literature historians of psychiatry have produced. But more importantly, having done so, he has engaged in a positively prodigious amount of work in the archives. One can only admire the persistence and the diligence with which he has combed through an extraordinary array of materials . . . Genetics in the Madhouse is gracefully written, and Porter only occasionally gets bogged down in the minutiae of the archival materials he has spent so much time exploring."—Andrew Scull, Brain

"Porter shows that the population view of mental illness persisted throughout the history of the asylum and flowed logically into the era of eugenics. And he also illustrates that the history of madness helps expand the history of genetics beyond a narrow view of genes. . . . His history makes it impossible to continue the disconnect between the data of the past and the assertions of the present."—Laura D. Hirshbein, The Common Reader

"We’ve all been taught how genetics got its start in Mendel’s pea patch. But the real story is more complicated, and a lot more interesting. In Genetics in the Madhouse, Theodore Porter chronicles some of the early history of heredity—not in gardens, but in asylums. The book is a fascinating exploration of the long-running conviction that madness, criminality, and other mental traits can be passed down from parent to child."—Carl Zimmer, author of She Has Her Mother’s Laugh: The Powers, Perversions, and Potential of Heredity

"Porter’s masterful book casts the fresh light of sanity over a previously uncharted sea of data on madness. He brings analytical order to an intriguingly chaotic subject, illuminating the challenges of ‘big data’ from a past era when the plasticity of categorization resulted in data being deduced from conclusions, a problem with uncanny similarities to those we face today."—Stephen M. Stigler, author of The Seven Pillars of Statistical Wisdom

"Porter brilliantly reveals the debt that the science of human heredity owes to the data gathering, numerical tables, and statistical interpretations that emerged from attempts to account for mental and physical disease among patients in asylums, hospitals, and prisons. Richly informed by archival sources, his book is masterfully argued, lucidly written, and boldly original. A landmark in the history of medicine, science, and mental illness."—Daniel J. Kevles, author of In the Name of Eugenics: Genetics and the Uses of Human Heredity

"Porter serves as a captivating and intriguing guide into the largely uncredited history of statistical and genetic data derived from the pre-Mendelian asylums, prisons, and schools. Genetics in the Madhouse succeeds in illuminating our present concepts of heredity and eugenics by leaning into the complexities of human science."—Aaron T. Beck, University of Pennsylvania

"Genetics in the Madhouse is a fascinating examination of the role played by big data in the history of genetics and its subsequent exploitation in the disgraced science of eugenics. Porter weaves together complex elements of historical influences, personalities, and seismic events almost like a novel, but the difference is that his story cannot have a neat and tidy resolution. Beautifully written and admirably researched, this is an enthralling book."—Catharine Arnold, author of Bedlam: London and Its Mad

"Important and original. Drawing on a wealth of archival research in many languages across many different national settings, Porter reexamines the role of psychiatry in the study of human heredity. Genetics in the Madhouse is an enormously impressive book."—Andrew Scull, author of Madness in Civilization: A Cultural History of Insanity, from the Bible to Freud, from the Madhouse to Modern Medicine

"A very significant contribution to the history of the human sciences, statistics, and eugenics. Porter rewards readers not only with astonishing insights into nineteenth-century data collection on the mentally ill and feebleminded, but also with the pleasure of reading a good, intriguing story."—Staffan Müller-Wille, coauthor of A Cultural History of Heredity