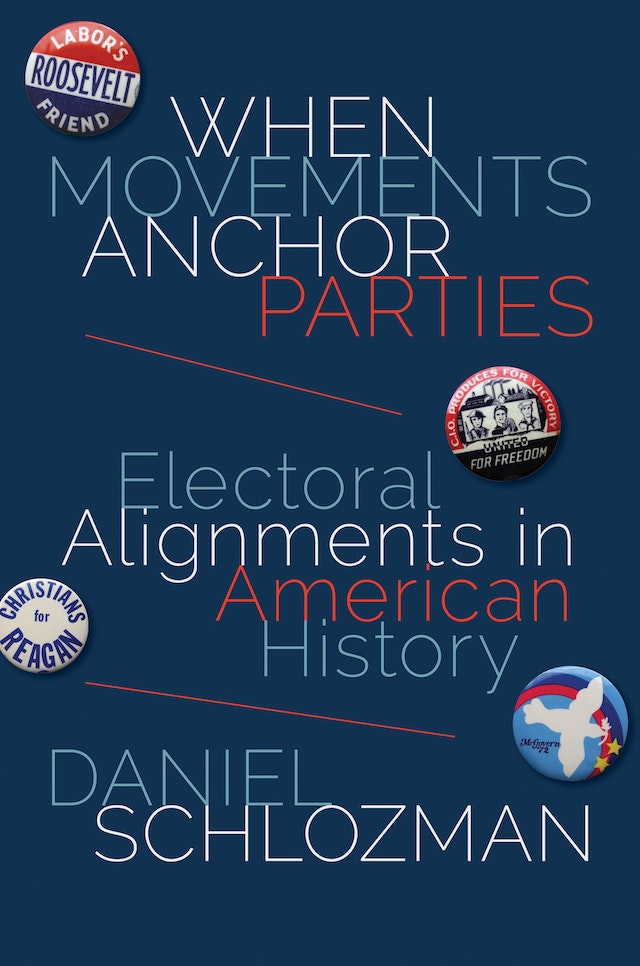 Throughout American history, some social movements, such as organized labor and the Christian Right, have forged influential alliances with political parties, while others, such as the antiwar movement, have not. When Movements Anchor Parties provides a bold new interpretation of American electoral history by examining five prominent movements and their relationships with political parties.

Taking readers from the Civil War to today, Daniel Schlozman shows how two powerful alliances—those of organized labor and Democrats in the New Deal, and the Christian Right and Republicans since the 1970s—have defined the basic priorities of parties and shaped the available alternatives in national politics. He traces how they diverged sharply from three other major social movements that failed to establish a place inside political parties—the abolitionists following the Civil War, the Populists in the 1890s, and the antiwar movement in the 1960s and 1970s. Moving beyond a view of political parties simply as collections of groups vying for preeminence, Schlozman explores how would-be influencers gain influence—or do not. He reveals how movements join with parties only when the alliance is beneficial to parties, and how alliance exacts a high price from movements. Their sweeping visions give way to compromise and partial victories. Yet as Schlozman demonstrates, it is well worth paying the price as movements reorient parties’ priorities.

"Many groups make up party coalitions, but few have the influence and endurance to anchor parties. This exceptionally well-written book explains the complex political networking and alliance building activities that can help movements secure permanence within political parties."—Choice

"This study deepens what is known about how party coalitions are shaped by the efforts of groups and the entrepreneurs that lead them, making it mandatory reading for any serious scholar of American politics or history."—Michael T. Heaney and Fabio Rojas, Perspectives on Politics

"This rigorous and stimulating book reveals how the labor and Christian Right movements joined direct action with partisan maneuver—and transformed American politics. When Movements Anchor Parties peers through the rancorous politics of our time to provide a fresh interpretation of how the Democratic and Republican Parties have become so polarized over the past half century. Schlozman has written a thought-provoking study of American democracy."—Sidney M. Milkis, University of Virginia

"A brilliant and beautifully crafted scholarly study destined to join the pantheon of classics in American political development. Schlozman theorizes and analyzes how some social movements form durable alliances with parties—labor and the Democrats, conservative evangelicals and the Republicans—and why others fail. When Movements Anchor Parties enriches contemporary debates about polarization, party networks, ideology, and coalition building."—Thomas E. Mann, Brookings Institution

"Scholars increasingly realize that political parties and social movements cannot be fully understood in isolation from one another. When Movements Anchor Parties offers a richly informed and insightful account of two fateful and durable alliances: the labor movement with FDR's Democrats and the Christian Right with Reagan's Republicans. Schlozman's illuminating book highlights the influence of these developments on contemporary American politics."—David Karol, University of Maryland

"This is a book of remarkable insight and impressive historical scope. The extensiveness of Schlozman's research is jaw-dropping. When Movements Anchor Parties will become essential reading for scholars of political parties, interest groups, and social movements, and will be a fixture in syllabi on American political development. This is a very important book."—Daniel J. Galvin, author of Presidential Party Building: Dwight D. Eisenhower to George W. Bush