How genomics is revolutionizing the social sciences 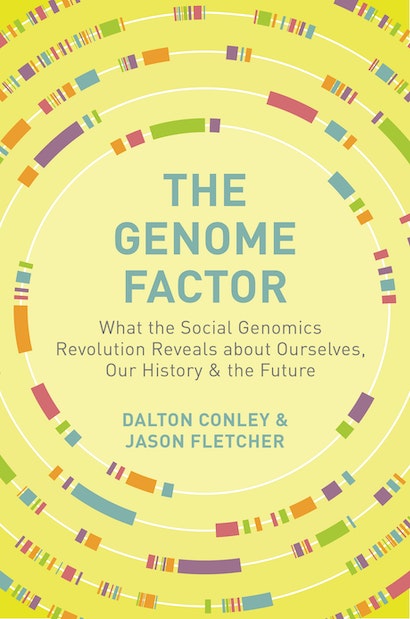 For a century, social scientists have avoided genetics like the plague. But the nature-nurture wars are over. In the past decade, a small but intrepid group of economists, political scientists, and sociologists have harnessed the genomics revolution to paint a more complete picture of human social life than ever before. The Genome Factor describes the latest astonishing discoveries being made at the scientific frontier where genomics and the social sciences intersect.

The Genome Factor reveals that there are real genetic differences by racial ancestry—but ones that don’t conform to what we call black, white, or Latino. Genes explain a significant share of who gets ahead in society and who does not, but instead of giving rise to a genotocracy, genes often act as engines of mobility that counter social disadvantage. An increasing number of us are marrying partners with similar education levels as ourselves, but genetically speaking, humans are mixing it up more than ever before with respect to mating and reproduction. These are just a few of the many findings presented in this illuminating and entertaining book, which also tackles controversial topics such as genetically personalized education and the future of reproduction in a world where more and more of us are taking advantage of cheap genotyping services like 23andMe to find out what our genes may hold in store for ourselves and our children.

The Genome Factor shows how genomics is transforming the social sciences—and how social scientists are integrating both nature and nurture into a unified, comprehensive understanding of human behavior at both the individual and society-wide levels.

Dalton Conley is the Henry Putnam University Professor of Sociology at Princeton University. His many books include Parentology: Everything You Wanted to Know about the Science of Raising Children but Were Too Exhausted to Ask. He lives in New York City. Jason Fletcher is Professor of Public Affairs, Sociology, Agricultural and Applied Economics, and Population Health Sciences at the University of Wisconsin–Madison. He lives in Madison.

"Too often, the debate over the ethics of genomics takes place behind closed doors—among scientists, doctors and government officials. Members of the general public are left out or treated as an afterthought rather than placed at the center of the conversation. Scientific research is crucial, but the moral dilemmas raised by The Genome Factor belong to us all."—Amy Dockser Marcus, Wall Street Journal

"A fresh look at the nature vs. nurture debate. . . . Illuminating."—Kirkus

"An excellent primer. . . . Conley and Fletcher have a clear, engaging writing style, use metaphors very effectively, and are able to explain complex concepts and methodologies in a way that is comprehensible to non-experts, without losing vital content."—Edward Bell, Journal of Politics and Life Sciences

"An indispensable introduction to one of the most exciting frontiers in the social sciences, by two of its pioneers. The Genome Factor is filled with surprises, insights, and strokes of ingenuity."—Steven Pinker, Harvard University, author of How the Mind Works

"Genomics has transformed many areas of science and promises to do the same for society as a whole. Conley and Fletcher provide an excellent introduction to genomics and a thoughtful analysis of its potential impact on our understanding of an impressive range of topics, including race, IQ, medicine, social policy, and international relations."—Gene E. Robinson, director of the Carl R. Woese Institute for Genomic Biology, University of Illinois at Urbana-Champaign

"Yes, social scientists need genomics, but they need a new genomics that respects the psychological complexities of the individual and cultural activities of human beings. This genomics doesn't fully exist yet, but The Genome Factor shines a bright light down the path that will eventually lead there."—Eric Turkheimer, University of Virginia

"The Genome Factor is an exhilarating and accessible exploration of dangerous and disputed territory: the role of genes in economic and social life. For anyone interested in poverty, inequality, and social mobility, this will be a rewarding read."—Gregory Clark, author of The Son Also Rises: Surnames and the History of Social Mobility

"Sophisticated, imaginative, and intellectually first-rate. I know of no other book that so accessibly pulls together such a vast array of complex material at the intersection of genetics and the social sciences."—Michael J. Shanahan, University of North Carolina, Chapel Hill

"Novel and timely. Conley and Fletcher cover a wide range of topics in an accessible way, using recent studies and well-chosen metaphors and anecdotes. It is an excellent introduction to the growing area of sociogenomic research."—Colter Mitchell, University of Michigan