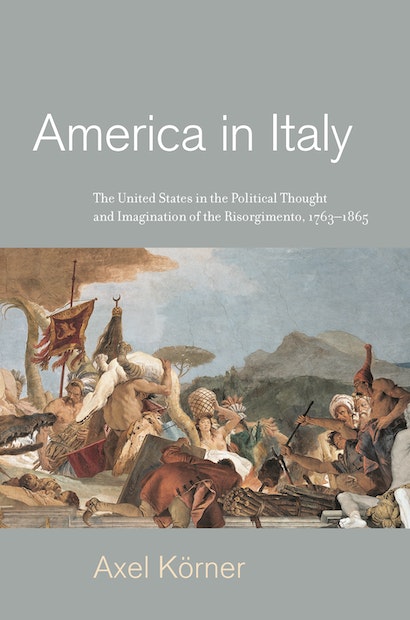 America in Italy examines the influence of the American political experience on the imagination of Italian political thinkers between the late eighteenth century and the unification of Italy in the 1860s. Axel Körner shows how Italian political thought was shaped by debates about the American Revolution and the U.S. Constitution, but he focuses on the important distinction that while European interest in developments across the Atlantic was keen, this attention was not blind admiration. Rather, America became a sounding board for the critical assessment of societal changes at home.

Many Italians did not think the United States had lessons to teach them and often concluded that life across the Atlantic was not just different but in many respects also objectionable. In America, utopia and dystopia seemed to live side by side, and Italian references to the United States were frequently in support of progressive or reactionary causes. Political thinkers including Cesare Balbo, Carlo Cattaneo, Giuseppe Mazzini, and Antonio Rosmini used the United States to shed light on the course of their nation’s political resurgence. Concepts from Montesquieu, Rousseau, and Vico served to evaluate what Italians discovered about America. Ideas about American “domestic manners” were reflected and conveyed through works of ballet, literature, opera, and satire.

Transcending boundaries between intellectual and cultural history, America in Italy is the first book-length examination of the influence of America’s political formation on modern Italian political thought.

Axel Körner is professor of modern history at University College London and director of the UCL Centre for Transnational History. His books include Politics of Culture in Liberal Italy and America Imagined.

"[America in Italy] makes an extremely valuable contribution to both intellectual and cultural history by its close examination of what this diverse group of Italian intellectuals, activists, and, to a lesser degree, the Italian ‘public' understood about American life and political institutions (and the impact of this understanding on their nationalist struggle)."—Choice

"Korner is perfectly positioned to undertake the ambitious task of writing a comprehensive overview of the history of the images of America in Italy between the American Revolution and the Civil War. The result of his effort is an elegantly written, extraordinarily erudite and highly innovative work, whose reading will reward both Italian and American scholars with the discovery of a multitude of cultural and political connections between eighteenth- and nineteenth century Italy and the United States."—Enrico Dal Lago, European History Quarterly

"This exceptional book shows the tight relationship between political action and belief, and the wider impact of high and low culture. Positioning Italian culture and political thought transnationally, and harnessing overlooked sources in an innovative and exciting fashion, Körner shows brilliantly how Italy responded to America as part of a wider European engagement and introduces Anglophone readers to significant Italian thinkers."—David Laven, University of Nottingham

"America in Italy looks at how Risorgimento thinkers and Italian nationalists perceived the American experiment in federalist democracy and how they applied the U.S. political model to their own project of unifying Italy into an independent state. This meticulously researched book places itself within the growing debates of the broader transnational and international aspects of the Italian Risorgimento and offers up a careful analysis of Italian political thinkers generally unavailable to English-reading scholars."—Suzanne Stewart-Steinberg, Brown University