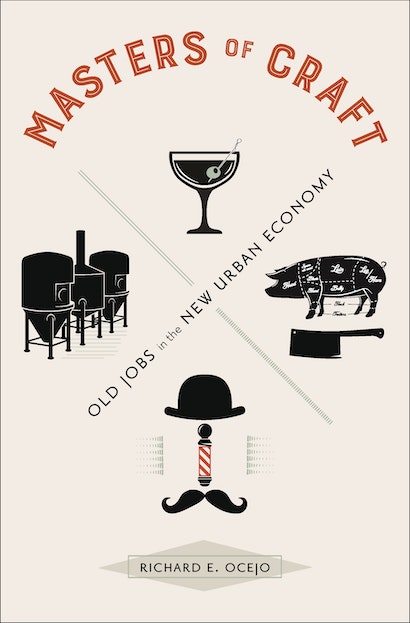 In today’s new economy—in which “good” jobs are typically knowledge or technology based—many well-educated and culturally savvy young men are instead choosing to pursue traditionally low-status manual labor occupations as careers. Masters of Craft looks at the renaissance of four such trades: bartending, distilling, barbering, and butchering.


In this in-depth and engaging book, Richard Ocejo takes you into the lives and workplaces of these people to examine how they are transforming these once-undesirable jobs into “cool” and highly specialized upscale occupational niches—and in the process complicating our notions about upward and downward mobility through work. He shows how they find meaning in these jobs by enacting a set of “cultural repertoires,” which include technical skills based on a renewed sense of craft and craftsmanship and an ability to understand and communicate that knowledge to others, resulting in a new form of elite taste-making. Ocejo describes the paths people take to these jobs, how they learn their chosen trades, how they imbue their work practices with craftsmanship, and how they teach a sense of taste to their consumers.

"A sociologist walks in a bar . . . and discovers the soul of a new economy . . . Mr. Ocejo has a good eye and ear. He has talked to a lot of people. And his book is full of acutely heard and closely observed details."—William L. Hamilton, Wall Street Journal

"Why are upscale versions of traditional manufacturing and service jobs considered hip, desirable, and cool? Ocejo, a sociology professor, examines the ‘urban village model' that has revitalized urban areas. He looks at four elements of gentrification—craft breweries, barber shops, whole-animal butcher shops, and cocktail bars. . . . Using his own field experiences and interviews with business owners and workers, the author identifies transformations in the U.S. cultural elite that have led to this new service economy, one that is strikingly male-dominated. He uses Chelsea Market in Manhattan as an example of how the reappearance of businesses formerly considered essential, but not prestigious, in exclusive and expensive form mirrors the gentrification of the neighborhoods that once supported them in their previous incarnations. The book reads well. . . . Sociologists and others with a serious interest in hipster culture will learn much from it."—Publishers Weekly

"[Ocejo] engagingly portrays several workers, tracing their motivations for choosing a job, their satisfactions and challenges, and plans for their futures. A close-up and often entertaining look at new service jobs in an urban economy."—Kirkus

"A fascinating book, full of valuable observations and insights. Particularly impressive is the way it captures the distinctive atmospheres of these jobs."—William Skidelsky, Financial Times

"I definitely recommend this book to anyone interested in the evolution of labor markets, how America will respond to ongoing automation, the production of status, and the role of men in an increasingly feminized society."—Tyler Cowen, Marginal Revolution

"As this earnest and perceptive sociological study demonstrates, innovation and social fulfillment can be much less limited than is ordinarily recognized. Grounded in some inspiring primary research and embedded interviews, Ocejo examines how the renewal and enhancement of some long-known jobs and crafts can impact participants, neighborhoods, and attitudes. This scholarly and compelling study examines the resurgence of craft labor among upscale men's barbers, whole-animal butcher shop workers, cocktail bartenders, and craft distillers in Brooklyn, Manhattan, and upstate New York and in so doing exposes some of the realities, nuances, and consequences of artisanal laborers in the modern age."—Choice

"[Masters of Craft is] an extremely timely survey of a labor field that has been slightly beyond the powers of description for a lot of critics and social commentators. Cool is so difficult to quantify. But incomes are quantifiable, as is data about who has what job, and gentrification studies are one the rise. Masters of Craft is a landmark."—Josephine Livingstone, New Republic

"This book truly shines in its detailed accounts of how workers in new culture industries construct meaning and value through the jobs they do and the relationships that they forge."—Erik T. Withers, Symbolic Interaction

"This innovative book immerses readers in the social worlds of artisanal service workers and the tony, omnivorous taste communities they serve, and deepens our understanding of the possibilities of sustaining careers based on authentic and transparent client encounters in a precarious urban economy. Ocejo offers new typologies of artisanal career paths and worker-client relationships that will benefit future scholarship and guide aspiring freelance artisans as they master their craft."—Daniel B. Cornfield, Vanderbilt University, author of Beyond the Beat: Musicians Building Community in Nashville

"Masters of Craft provides a powerful lens into two of the most powerful forces in society today: the gentrification of our cities and the transformation of work. Through his detailed research on a series of new craft industries—bartending, distilling, barbering, and butchering—Richard Ocejo helps us better understand the opportunities and challenges of reurbanization and the transformation of older manual labor jobs into new hybrid forms of knowledge work."—Richard Florida, University of Toronto, author of The Rise of the Creative Class

"Though we often think about today's trendy consumption in terms of ‘tastes,’ Masters of Craft gives us an inside view of its true base: the highly skilled craftsmen who create the artisanal cocktails, nose-to-tail meat cuisine, and fashionable haircuts on which the hippest part of the urban cultural ecosystem relies. By showing how they transform raw materials into the bread and butter of the creative class, Ocejo provides a fascinating cross section of the new urban economy. This is essential reading for sociologists of culture, work, cities, and consumption."—Sharon Zukin, author of Naked City: The Death and Life of Authentic Urban Places

"A wonderful contribution to the field. Masters of Craft is an engaging and well-written addition to the emerging literature on aesthetic labor and the changing social meaning of jobs—particularly now in the postrecession era, when many manual labor jobs have disappeared. I truly enjoyed this book."—Yasemin Besen-Cassino, author of Consuming Work: Youth Labor in America

"Masters of Craft is a great read. Ocejo's rich case studies of barbers, bartenders, distillers, and butchers reveal how workers in seemingly functional occupations can come to view their work as a form of art. This is an important book that demands attention and that will influence how scholars approach the intersection of work and taste."—Timothy J. Dowd, Emory University