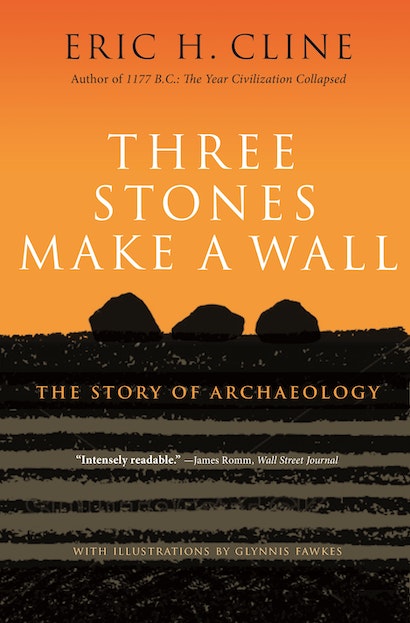 In 1922, Howard Carter peered into Tutankhamun’s tomb for the first time, the only light coming from the candle in his outstretched hand. Urged to tell what he was seeing through the small opening he had cut in the door to the tomb, the Egyptologist famously replied, “I see wonderful things.” Carter’s fabulous discovery is just one of the many spellbinding stories told in Three Stones Make a Wall.

Written by Eric Cline, an archaeologist with more than thirty seasons of excavation experience, Three Stones Make a Wall traces the history of archaeology from an amateur pursuit to the cutting-edge science it is today by taking the reader on a tour of major archaeological sites and discoveries, from Pompeii to Petra, Troy to the Terracotta Warriors, and Mycenae to Megiddo and Masada. Cline brings to life the personalities behind these digs, including Heinrich Schliemann, the former businessman who excavated Troy, and Mary Leakey, whose discoveries advanced our understanding of human origins. The discovery of the peoples and civilizations of the past is presented in vivid detail, from the Hittites and Minoans to the Inca, Aztec, and Moche. Along the way, the book addresses the questions archaeologists are asked most often: How do you know where to dig? How are excavations actually done? How do you know how old something is? Who gets to keep what is found?

Taking readers from the pioneering digs of the eighteenth century to the exciting new discoveries being made today, Three Stones Make a Wall is a lively and essential introduction to the story of archaeology.

Eric H. Cline is professor of classics and anthropology and director of the Capitol Archaeological Institute at George Washington University. An active archaeologist, he has excavated and surveyed in Greece, Crete, Cyprus, Egypt, Israel, Jordan, and the United States. His many books include 1177 B.C.: The Year Civilization Collapsed (Princeton).

"Intensely readable. . . . Cline is a winning spokesman for his field, with a warm and generous voice evocative of the best university lectures. . . . More than a few readers may feel a sudden urge to rush out to a nearby mound or midden, with spade and trowel in hand."—James Romm, Wall Street Journal

"Wonderfully engaging. . . . Archaeology has developed over the last two centuries into one of the great human sciences. It steadily expands the known history of humans on earth and thickens our knowledge of human diversity. Cline is fortunate to be a leader in this remarkable profession and readers are lucky that he knows how to write about it with precision and joy."—Robert Fulford, National Post

"This ambitious project is to be warmly welcomed. [Cline] writes clearly, informatively and enthusiastically and tells a good story, often illuminated by personal experiences from working on site. . . . As a general, up-to-date and excellent value introduction to the world of archaeology and the past it reveals, it can be counted a success."—Peter Jones, Classics for All

"Eric Cline is a seasoned archaeologist, and he makes history come alive in this nonfiction look at some of the greatest archaeological discoveries ever made. From Pompeii to Troy, Cline gives an insider look at these famous digs, blending history and science in a way that's guaranteed to keep your attention from the first page. Not only does he take you through the history of the discovery itself, but he also shows you exactly how the dig was managed in the first place. If you’ve ever wondered how archaeologists function - from where to dig, how to do it, or what comes next - then you’ll want to pick up a copy of Three Stones Make a Wall as soon as you possibly can."—Rachel Carter, BookTrib

"The seasoned anthropologist-adventurer Eric H. Cline does his best to re-burnish the lost glow of archaeology by collecting several stories of remarkable discoveries in a single well-written volume. The book goes a long way toward reviving the idea that the past, rather than being buried and gone, is the last and greatest frontier of human exploration."—New Criterion

"A well-turned, five-point guide to archaeological inquiry. . . . [The book] tenders a broad, fleshy survey of archaeology's history and big finds, as well as the bones and sinews that make the field so fundamental to our human story. Cline’s enthusiasm is a force of nature, just bridled enough to pause and consider certain critical genetic sequences in the strands of archaeology’s DNA, those that fashioned the field’s chromatic stories and venerable truths."—Peter Lewis, Minneapolis Star Tribune

"Written with vigour, authority, and wit, this antidote to dry volumes of worthy debate is a welcome reminder that archaeology can–and should–be told in a way that is exciting, fresh, and fun."—Current World Archaeology

"[Three Stones Make a Wall] is well written and will be an easy read for students and interested laypeople. . . . This latest contribution reflects [Cline's] lifelong passion for the field."—James M. Weinstein, Ancient History Bulletin

"There are a number of texts on the market published by some of the most well-known names in the field which summate and evaluate the history of archeology but none that narrate so well the sites and excavations and personally comment on the contemporary evolution of the discipline as much as Three Stones. This volume is an impressive . . . Addition to any collection."—Samuel Pfister, The George Washington University Undergraduate Bulletin of Ancient Studies

"A good story involves mystery and adventure and is seasoned with comic touches. The popular quartet (soon to be quintet) of Indiana Jones films succeeds largely because it follows this formula, but readers who prefer the real-life equivalent should be equally pleased with Eric Cline's book. It’s a compendium of fascinating stories. . . . That people worldwide have ancestors of whom they can be proud, and whose achievements they can and must work to honor and preserve, is indeed a message for our time. Cline conveys it with a blend of earnestness and good humor, vivid descriptions, and conversational style. His book deserves to be widely read and its call to action heeded."—Valerie H. Pennanen, Christian Century

"This survey of many of archaeology's most important sites covers a range of exotic (and familiar) locations around the world. The author’s specialty is the Aegean Bronze Age, but he discusses discoveries as diverse as pre-modern human remains in Africa to Incan cities in Peru to the Terracotta Army in Xi’an. It’s particularly fascinating to read how various groups attempt to spin archaeological discoveries to support their own narratives. And amateur archaeologists will surely find the ‘how-to’ sections irresistible."—Andrew Harper Staff, Best Summer Reads

"[A] stellar global history of the field. . . . The book is hard to put down, so engagingly written that it will appeal to a wide audience. . . . Readers will be left with a trove of new knowledge about archaeology and also a sense of wonder that such seemingly mundane objects as stones, bones and pot shards can tell us so much about our forebears."—Nancy Roberts, CatholicPhilly.com

"Personal and highly readable. . . . Cline writes with a passion to communicate his love of archaeology to future generations."—David Gill, Bryn Mawr Classical Review

"Interpretation will always be essential to archaeology, and Three Stones Make a Wall is a masterpiece of historical interpretation."—Dominic Green, Minerva Magazine

"Takes you on fascinating, enriching visits to excavation sites around the world, bringing each to life in a way that will have you remember and treasure the people involved and the artifacts uncovered. Highly recommended!"—DIG Magazine

"Archaeologists continually call upon one another to write engaging stories about archaeology for the public. Eric Cline has answered that call admirably with this delightful book. . . . The author’s infectious love of his topic shines throughout the text, inviting the reader along for the ride."—Barbara J. Little, Canadian Journal of History

"Cline is a skilled storyteller who brings the great discoveries of world archaeology to life. . . . Informative and entertaining to lay readers and experts alike."—Jennie Ebeling, Biblical Archaeology Review

"Three Stones Make a Wall offers readers a compelling journey through many thousands of years of human achievements and a reasonable introduction to archaeological discovery. . . . [Cline]’s infectious love of his topic shines throughout the text, inviting the reader along for the ride."—Barbara J. Little, Canadian Journal of History

"This is a great title for big and small libraries, to allow readers to access this curious book locally."—Pennsylvania Literary Journal

"This book takes your hand and leads you on a magical archaeology mystery tour across the globe. You'll meet famous archaeologists, explore legendary sites, and see the latest discoveries using new technologies. Archaeology is full of ‘wonderful things,' and Three Stones Make a Wall, written by one of its greatest storytellers, is a must-have."—Sarah Parcak, University of Alabama at Birmingham, winner of the 2016 TED Prize

"Eric Cline takes the reader on an amazing journey through the history of archaeology, essentially allowing us to walk in the boots of archaeologists at the moment of the greatest discoveries of all time. This book is at once a wonderful introduction for those curious to know more about archaeology and a relevant read for lifelong excavators who uphold our human responsibility to uncover, preserve, and protect our past."—Kara Cooney, author of The Woman Who Would Be King: Hatshepsut's Rise to Power in Ancient Egypt

"Three Stones Make a Wall is an experienced archaeologist's fast-paced and fascinating account of the field's ‘greatest hits,' one that will engage all readers no matter what their background."—Jodi Magness, author of The Archaeology of the Holy Land

"In this up-to-date and eminently readable introduction to the field, Eric Cline, one of the world's foremost archaeologists, gives people a chance to peek behind the curtain of the mysterious and exciting world of archaeology. Readers will learn about famous sites and discoveries around the world as well as how to find, dig, and date ancient artifacts without ever leaving the house."—Candida Moss, author of The Myth of Persecution: How Early Christians Invented a Story of Martyrdom

"I loved this book. Three Stones Make a Wall is a great read filled with many interesting stories. A terrific piece of work."—Kenneth L. Feder, author of The Past in Perspective: An Introduction to Human Prehistory

"Cline provides an excellent history of both civilizations and the archaeological process—his knowledge of the subject is second to none."—Robert R. Cargill, author of The Cities That Built the Bible

"An accurate and engaging picture of archaeology past and present. This book fills a real need within the discipline, as it properly presents archaeology to the public in a way that has not been done before."—Rachel Hallote, author of Bible, Map, and Spade: The American Palestine Exploration Society, Frederick Jones Bliss, and the Forgotten Story of Early American Biblical Archeology