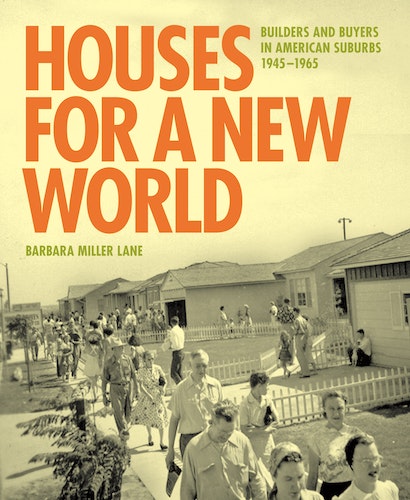 While the work of Frank Lloyd Wright, Richard Neutra, and their contemporaries frequently influences our ideas about house design at the midcentury, most Americans during this period lived in homes built by little-known builders who also served as developers of the communities. Often dismissed as “little boxes, made of ticky-tacky,” the tract houses of America’s postwar suburbs represent the twentieth century’s most successful experiment in mass housing. Houses for a New World is the first comprehensive history of this uniquely American form of domestic architecture and urbanism.

Between 1945 and 1965, more than thirteen million houses—most of them in new ranch and split-level styles—were constructed on large expanses of land outside city centers, providing homes for the country’s rapidly expanding population. Focusing on twelve developments in the suburbs of Boston, Philadelphia, Chicago, and Los Angeles, Barbara Miller Lane tells the story of the collaborations between builders and buyers, showing how both wanted houses and communities that espoused a modern way of life—informal, democratic, multiethnic, and devoted to improving the lives of their children. The resulting houses differed dramatically from both the European International Style and older forms of American domestic architecture.

Based on a decade of original research, and accompanied by hundreds of historical images, plans, and maps, this book presents an entirely new interpretation of the American suburb. The result is a fascinating history of houses and developments that continue to shape how tens of millions of Americans live.

Featured housing developments in Houses for a New World:

Barbara Miller Lane is Andrew W. Mellon Professor Emeritusin the Humanities and Research Professor in Growth and Structure of Cities at Bryn Mawr College. Her books include Architecture and Politics in Germany, 1918–1945, National Romanticism and Modern Architecture, and Housing and Dwelling.

"In Houses for a New World, the Bryn Mawr professor emerita Barbara Miller Lane investigates the output of a dozen lesser-known tract house developers in four diverse regions—New England, the mid-Atlantic, the Midwest, and Southern California—and treats the period's typical Cape Cods, ranches, and split-levels with the serious formal analysis once reserved for high-style architecture. . . . Her tour de force of research is all the more impressive because she has assembled documentation akin to that previously available on the residential work of important postwar figures such as Richard Neutra, William Wurster, and Marcel Breuer but largely overlooked for builders other than the Levitts."—Martin Filler, New York Review of Books

"To her credit, Ms. Lane stoutly rebuts . . . Slurs, encapsulated in the popular song about 'Little boxes made of ticky tacky' and shows that 'these generalizations were largely false'. Far from being the refuge of white middle-class 'Men in the Gray Flannel Suit,' their neurotic wives and delinquent children, and built by 'rapacious entrepreneurs, in the business of wringing the last penny out of substandard construction,' the houses were well-built and generously equipped and the developments by and large models of societal inclusiveness. . . . [T]hey represent a lost golden age of opportunity."—Martin Rubin, Washington Times

"The architecture profession has long criticized mass-produced housing in the suburbs for lacking artistic design and sophistication. Lane's book puts this argument in perspective. . . . Readers seeking a historical overview of this unique era in American homebuilding should enjoy this book."—Katherine Salant, Urbanland

"In her book Houses for a New World, architectural historian Barbara Miller Lane rises to the defense of these split levels of the past. Her arguments are compelling, in part because we look back with nostalgia to a time when the hardworking middle class could afford simple homes with mortgages that weren't made of empty promises."—Julie Michaels, ArchitectureBoston

"This book presents a significant portion of the history of everyday American life in a manner that is deeply researched, intuitive, insightful, and frequently self-referential. It is copiously illustrated with contemporary photographs and images derived from developers' sales brochures and popular housing literature."—Choice

"Superbly researched, this book gets closer to the essentials of the post-1945 suburban building process than any previous study. Barbara Miller Lane's detailed and perceptive examination of the different house types has rarely been attempted and never done as well."—Robert Fishman, University of Michigan

"Houses for a New World presents an entirely original and authoritative history of the development and design of the most common house types of the postwar suburbs. Anyone interested in the twentieth-century American home will want to consult this book first. Packed with new insights and ideas, and the result of decades of careful study, it is a tour de force."—Paul Groth, University of California, Berkeley