A concise introduction to the cutting-edge science of particle physics 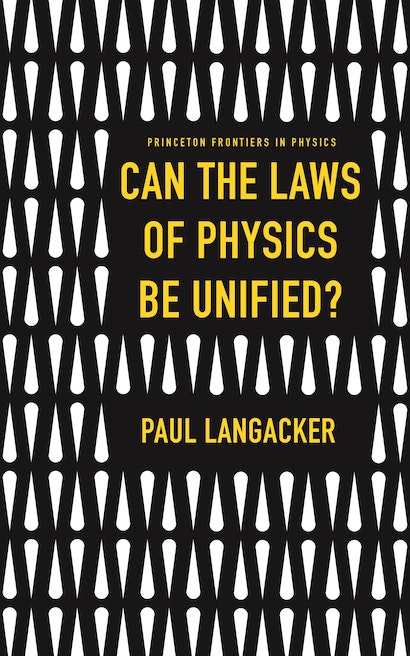 The standard model of particle physics describes our current understanding of nature’s fundamental particles and their interactions, yet gaps remain. For example, it does not include a quantum theory of gravity, nor does it explain the existence of dark matter. Once complete, however, the standard model could provide a unified description of the very building blocks of the universe. Researchers have been chasing this dream for decades, and many wonder whether such a dream can ever be made a reality.

Can the Laws of Physics Be Unified? is a short introduction to this exciting frontier of physics. The book is accessibly written for students and researchers across the sciences, and for scientifically minded general readers. Paul Langacker begins with an overview of the key breakthroughs that have shaped the standard model, and then describes the fundamental particles, their interactions, and their role in cosmology. He goes on to explain field theory, internal symmetries, Yang-Mills theories, strong and electroweak interactions, the Higgs boson discovery, and neutrino physics. Langacker then looks at the questions that are still unanswered: What is the nature of the mysterious dark matter and dark energy that make up roughly 95 percent of the universe? Why is there more matter than antimatter? How can we reconcile quantum mechanics and general relativity?

Can the Laws of Physics Be Unified? describes the promising theoretical ideas and new experiments that could provide answers and weighs our prospects for establishing a truly unified theory of the smallest constituents of nature and their interactions.

Paul Langacker is senior scientist at Princeton University, visitor at the Institute for Advanced Study in Princeton, and professor emeritus of physics at the University of Pennsylvania. He is the author of The Standard Model and Beyond.

"This book is a very worthwhile, balanced, and useful summary of our current understanding of the fundamental laws of physics. Langacker covers a large amount of material in a very digestible way."—Savdeep Sethi, University of Chicago

"Langacker is a renowned expert in particle physics who has made fundamental contributions to the field and lived through the golden era of the standard model. Not surprisingly, the scientific level of this informative book is impeccable."—Gian Francesco Giudice, author of A Zeptospace Odyssey: A Journey into the Physics of the LHC

"Langacker has written a useful and informative book that brings the standard model to a broad audience of scientists and aspiring scientists who are interested in the current status of particle physics."—Tom Lubensky, University of Pennsylvania