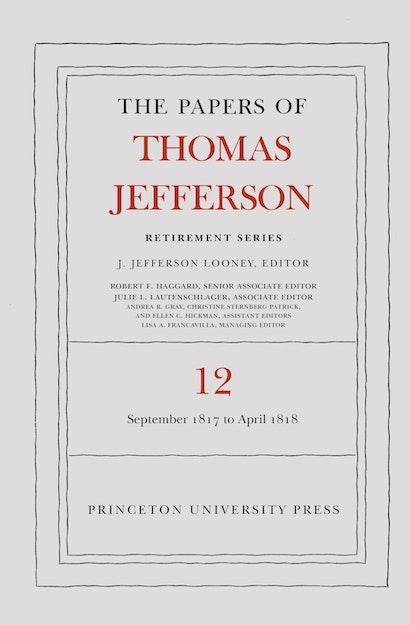 The 580 documents in this volume cover a wide range of fascinating topics. Jefferson receives impressions of a mammoth’s tooth, altitude and meteorological observations, a call for a national pharmacopoeia, a discussion of primeval geology, and a letter that elicits Jefferson’s opinion that cognition exists “in animal bodies certainly, in Vegetables probably, in Minerals not impossibly.” Jefferson leases his Tufton and Lego plantations to his grandson Thomas Jefferson Randolph. The directors of the Rivanna Company rebut Jefferson’s 1817 bill of complaint and he unwittingly ensures his eventual financial ruin by endorsing notes totaling $20,000 for Wilson Cary Nicholas. Jefferson adds to the collections of the American Philosophical Society and writes an extended introduction to the “Anas,” a corpus of official papers and political anecdotes documenting his service as George Washington’s secretary of state. Jefferson drafts legislation to establish a public education system in Virginia. He attends a Masonic cornerstone laying ceremony for the nascent Central College’s first pavilion early in October 1817 and is greatly pleased by the passage on 21 February 1818 of a law establishing a commission to plan a new state university, raising his hopes that Central College might soon become the University of Virginia.