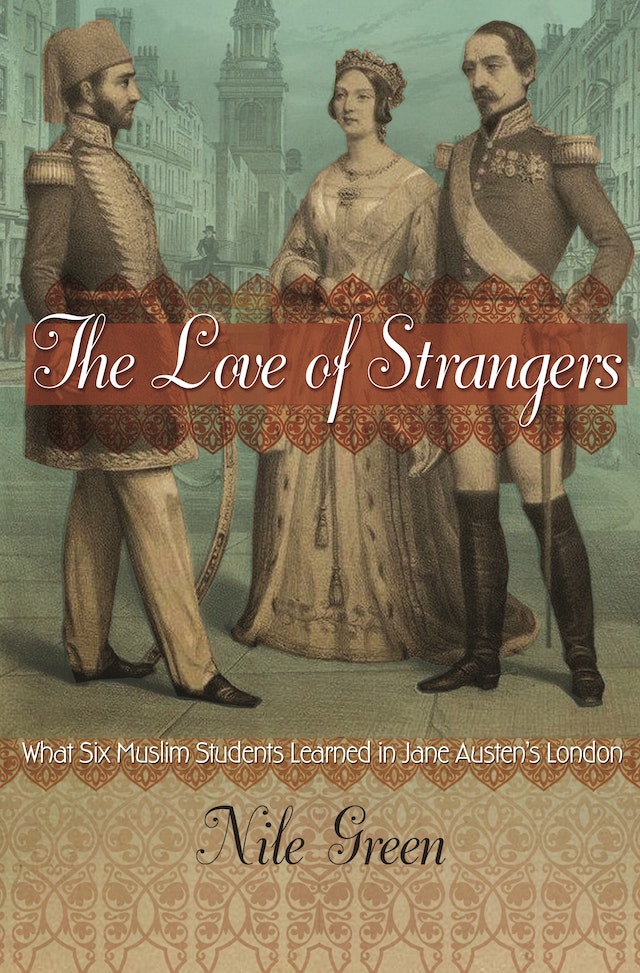 In July 1815, six Iranian students arrived in London under the escort of their chaperone, Captain Joseph D’Arcy. Their mission was to master the modern sciences behind the rapid rise of Europe. Over the next four years, they lived both the low life and high life of Regency London, from being down and out after their abandonment by D’Arcy to charming their way into society and landing on the gossip pages. The Love of Strangers tells the story of their search for love and learning in Jane Austen’s England.

Drawing on the Persian diary of the student Mirza Salih and the letters of his companions, Nile Green vividly describes how these adaptable Muslim migrants learned to enjoy the opera and take the waters at Bath. But there was more than frivolity to their student years in London. Burdened with acquiring the technology to defend Iran against Russia, they talked their way into the observatories, hospitals, and steam-powered factories that placed England at the forefront of the scientific revolution. All the while, Salih dreamed of becoming the first Muslim to study at Oxford.

The Love of Strangers chronicles the frustration and fellowship of six young men abroad to open a unique window onto the transformative encounter between an Evangelical England and an Islamic Iran at the dawn of the modern age. This is that rarest of books about the Middle East and the West: a story of friendships.

Nile Green is professor of history at UCLA. His many books include Sufism: A Global History. He lives in Los Angeles.

"[A] microhistory of a Persian journey through Regency England . . . [with] attention to the pluralization of religious practices in a period of intensified global connection. Within this context, Salih's account offers a valuable perspective on the familiar outlines of Regency England."—Paulo Lemos Horta, Times Literary Supplement

"This story of four years of discovery by Muslims visiting Europe for the first time makes for entertaining and instructive reading."—Leslie Mitchell, Literary Review

"Nile Green . . . has followed the Iranian students through Regency England with the determination and skill of a forensic detective. Using the diary of Mirza Salih as his primary guide, he has managed to trace his subjects through disparate archives, scattered letters, newspaper articles and even paintings. Such a feat is not to be underestimated."—The New York Times

"In Salih's diary, Green unearths a genuinely valuable outsider's portrait of Regency England, its culture, manners and burgeoning industry. . . . This is a fascinating record of a profound, strange and charming encounter of East and West."—Shahidha Bari, Times Higher Education

"This fascinating study of six Iranian students in Regency London provides a positive counterpoint to two scholarly frameworks for interpreting encounters between East and West. . . . This book is a valuable contribution to the study of East-West encounters generally, and one that complicates the narratives that usually frame them."—Choice

"A marvelous book by one of the finest historians of the region. It is a major contribution to our understanding of early relations between the Muslim East and ‘the West,' as well as an enchanting tale of tolerance, diversity, and freedom of exchange. Green's prose is engaging and elegant, and he wears his erudition lightly. This is a must-read for anyone interested in the humanity of encounters among cultures."—Daniel Newman, Los Angeles Review of Books

"Nile Green is one of our finest global historians. In this wonderfully insightful and entertaining book, his remarkable narrative skills are on full display as he illuminates the cross-cultural encounters of a group of Iranian students abroad in early-nineteenth-century London."—Pankaj Mishra, author of From the Ruins of Empire: The Revolt against the West and the Remaking of Asia

"Nile Green is among our foremost scholars of the East-West encounter in the nineteenth century, able to get us deeply inside Persian and Muslim culture of the era and to contextualize it in the age of European colonialism."—Juan Cole, author of The New Arabs: How the Millennial Generation Is Changing the Middle East

"The Love of Strangers is a pleasure to read. Green enables us to reconceptualize England during the late Georgian period of Jane Austen."—Michael H. Fisher, author of Migration: A World History

"Erudite and highly readable. By taking the interactions between these Iranian students and their British contacts as they were experienced—as opposed to as we understand them today in our postcolonial frameworks—Green has managed to give life to nineteen-century England in a new and exciting way."—Naghmeh Sohrabi, author of Taken for Wonder: Nineteenth-Century Travel Accounts from Iran to Europe