The first in-depth look at Staël's political life and writings 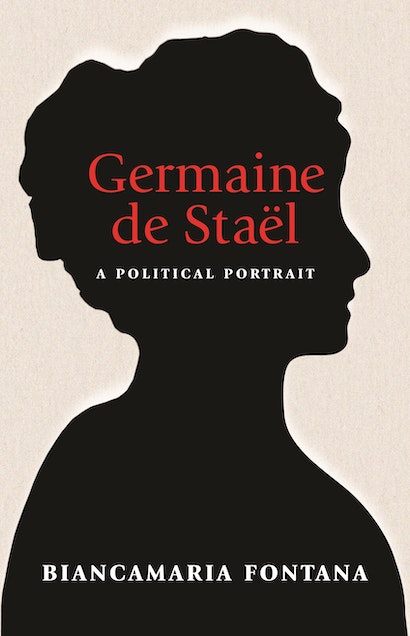 Germaine de Staël (1766–1817) is perhaps best known today as a novelist, literary critic, and outspoken and independent thinker. Yet she was also a prominent figure in politics during the French Revolution. Biancamaria Fontana sheds new light on this often overlooked aspect of Staël’s life and work, bringing vividly to life her unique experience as a political actor in a world where women had no place.

The banker’s daughter who became one of Europe’s best-connected intellectuals, Staël was an exceptionally talented woman who achieved a degree of public influence to which not even her wealth and privilege would normally have entitled her. During the Revolution, when the lives of so many around her were destroyed, she succeeded in carving out a unique path for herself and making her views heard, first by the powerful men around her, later by the European public at large. Fontana provides the first in-depth look at her substantial output of writings on the theory and practice of the exercise of power, setting in sharp relief the dimension of Staël’s life that she cared most about—politics. She was fascinated by the nature of public opinion, and believed that viable political regimes were founded on public trust and popular consensus. Fontana shows how Staël’s ideas were shaped by the remarkable times in which she lived, and argues that it is only through a consideration of her political insights that we can fully understand Staël’s legacy and its enduring relevance for us today.

Biancamaria Fontana is professor of the history of political ideas at the University of Lausanne in Switzerland. Her books include Montaigne's Politics (Princeton), Benjamin Constant and the Post-Revolutionary Mind, and Rethinking the Politics of Commercial Society.

"[An] admirable study of Staël as a political thinker."—Robert Darnton, New York Review of Books

"This austere and serious study provides a fine, straightforward, anti-sensational discussion of political writings in which Staël appears as far more than the usually depicted adjunct of famous men."—Janet Todd, Times Literary Supplement

"I wish I could meet brilliant Madame de Staël, the woman bold enough to stand up to Napoleon Bonaparte and brave enough to keep going back to revolutionary Paris, but Biancamaria Fontana's intriguing new book, Germaine de Staël: A Political Portrait . . . will have to do."—Elizabeth Cobbs, Times Higher Education

"[Germaine de Staël] makes for compelling reading in our current moment. And under any circumstances, Biancamaria Fontana's lively and learned new book is a long-overdue testimony to the enduring political significance of Germaine de Staël as a founding figure of the French liberal tradition."—Carla Hesse, Times Higher Education

"[A] distinguishing facet of this title is its exquisite writing; the organization, clarity, and energy of Fantana's research are thoroughly commendable, as is the brief concluding chapter, which connects Staël to the 21st century."—Choice

"Convincingly demonstrates why Staël deserves a prominent place in the history of modern political thought. . . . Let' s hope that this thoughtful book will be followed by other interpretations that will consolidate Staël' s reputation as a first-rate political thinker."—Aurelian Craiutu, Review of Politics

"Concise and elegant. . . . Fontana’s book grants [Germaine de Staël] the place she deserves in the intellectual history of her time."—Atoine Lilti, Journal of Modern History

"A captivating portrait of a fascinating figure caught up in the whirlwind of events."—Richard Bourke, author of Empire and Revolution: The Political Life of Edmund Burke

"An important and original book about a prominent female intellectual who took the measure of the French Revolution in both theoretical and practical terms. Fontana argues convincingly that Staël's political ideas have been overlooked or underrated in previous treatments of her life and work."—Ruth Scurr, author of Fatal Purity: Robespierre and the French Revolution