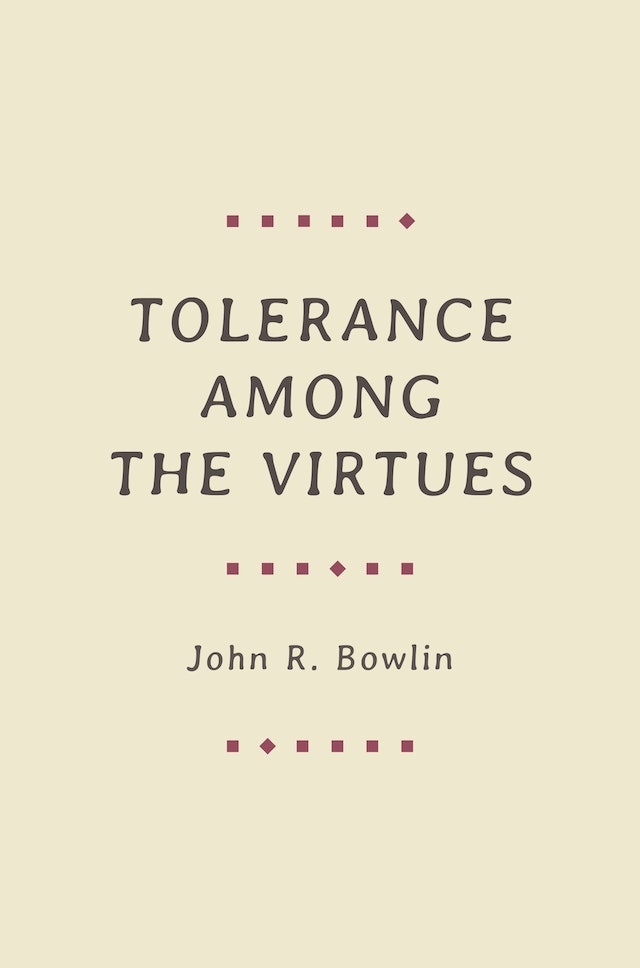 In a pluralistic society such as ours, tolerance is a virtue—but it doesn’t always seem so. Some suspect that it entangles us in unacceptable moral compromises and inequalities of power, while others dismiss it as mere political correctness or doubt that it can safeguard the moral and political relationships we value. Tolerance among the Virtues provides a vigorous defense of tolerance against its many critics and shows why the virtue of tolerance involves exercising judgment across a variety of different circumstances and relationships—not simply applying a prescribed set of rules.

Drawing inspiration from St. Paul, Aquinas, and Wittgenstein, John Bowlin offers a nuanced inquiry into tolerance as a virtue. He explains why the advocates and debunkers of toleration have reached an impasse, and he suggests a new way forward by distinguishing the virtue of tolerance from its false look-alikes, and from its sibling, forbearance. Some acts of toleration are right and good, while others amount to indifference, complicity, or condescension. Some persons are able to draw these distinctions well and to act in accord with their better judgment. When we praise them as tolerant, we are commending them as virtuous. Bowlin explores what that commendation means.

Tolerance among the Virtues offers invaluable insights into how to live amid differences we cannot endorse—beliefs we consider false, actions we think are unjust, institutional arrangements we consider cruel or corrupt, and persons who embody what we oppose.

John R. Bowlin is the Robert L. Stuart Associate Professor of Philosophy and Christian Ethics at Princeton Theological Seminary. He is the author of Contingency and Fortune in Aquinas's Ethics.

"If all this hardheaded, disenchanted talk is getting you down, consider the refined and rarefied argument in Tolerance Among the Virtues."—James Ryerson, New York Times Book Review

"Bowlin’s book superbly marshals the power of the Thomistic virtue tradition to make a compelling argument for locating tolerance among the virtues. . . . Powerful and necessary."—James Calvin Davis, Interpretation

"The most original and instructive account we have of a single virtue, Tolerance among the Virtues illumines the need for patient endurance of some differences that divide and trouble us. A compelling diagnosis of the culture wars and a major contribution to political philosophy, ethics, and theology."—Jeffrey Stout, author of Democracy and Tradition

"How can we hope to preserve the peace and well-being of society in the face of the objectionable differences that divide us from our fellow citizens? If anything can productively recast the debate between liberals suspicious of perfectionism and traditionalists troubled by indifference and relativism, it is John Bowlin's brilliant account of the virtue of tolerance."—Jennifer A. Herdt, Yale University

"Bowlin offers a highly original philosophical and theological inquiry into the virtues of tolerance and forbearance in civil society and Christian social and political ethics. Tolerance among the Virtues is an important and controversial book."—Melissa Lane, author of The Birth of Politics: Eight Greek and Roman Political Ideas and Why They Matter

"Bowlin combines rich historical scholarship with constructive ethical and theological objectives. His philosophical sophistication and historical mastery blend so seamlessly that his argument seems natural and almost obvious, despite being complicated and potentially contentious. This is a major contribution."—G. Scott Davis, author of Believing and Acting: The Pragmatic Turn in Comparative Religion and Ethics