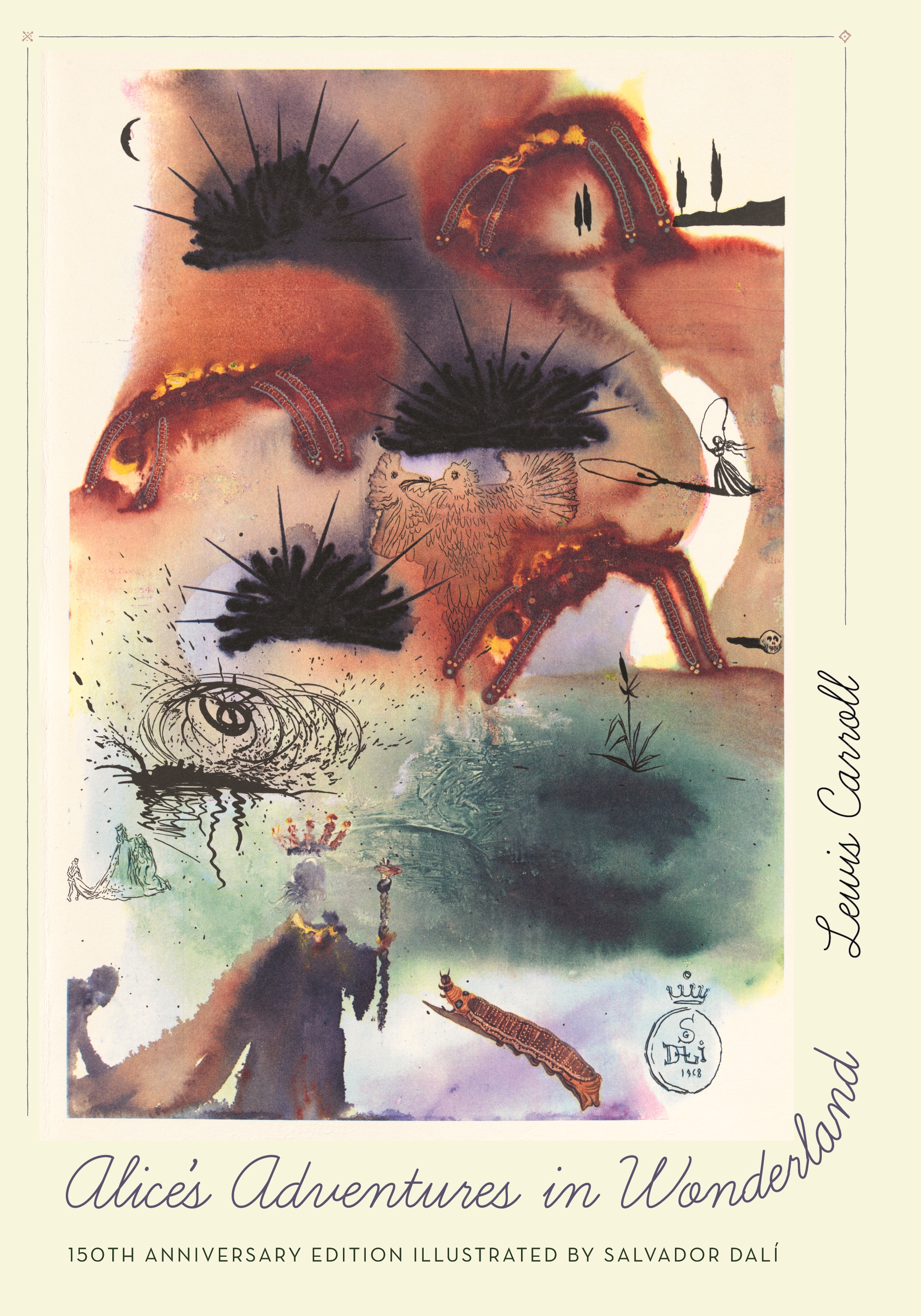 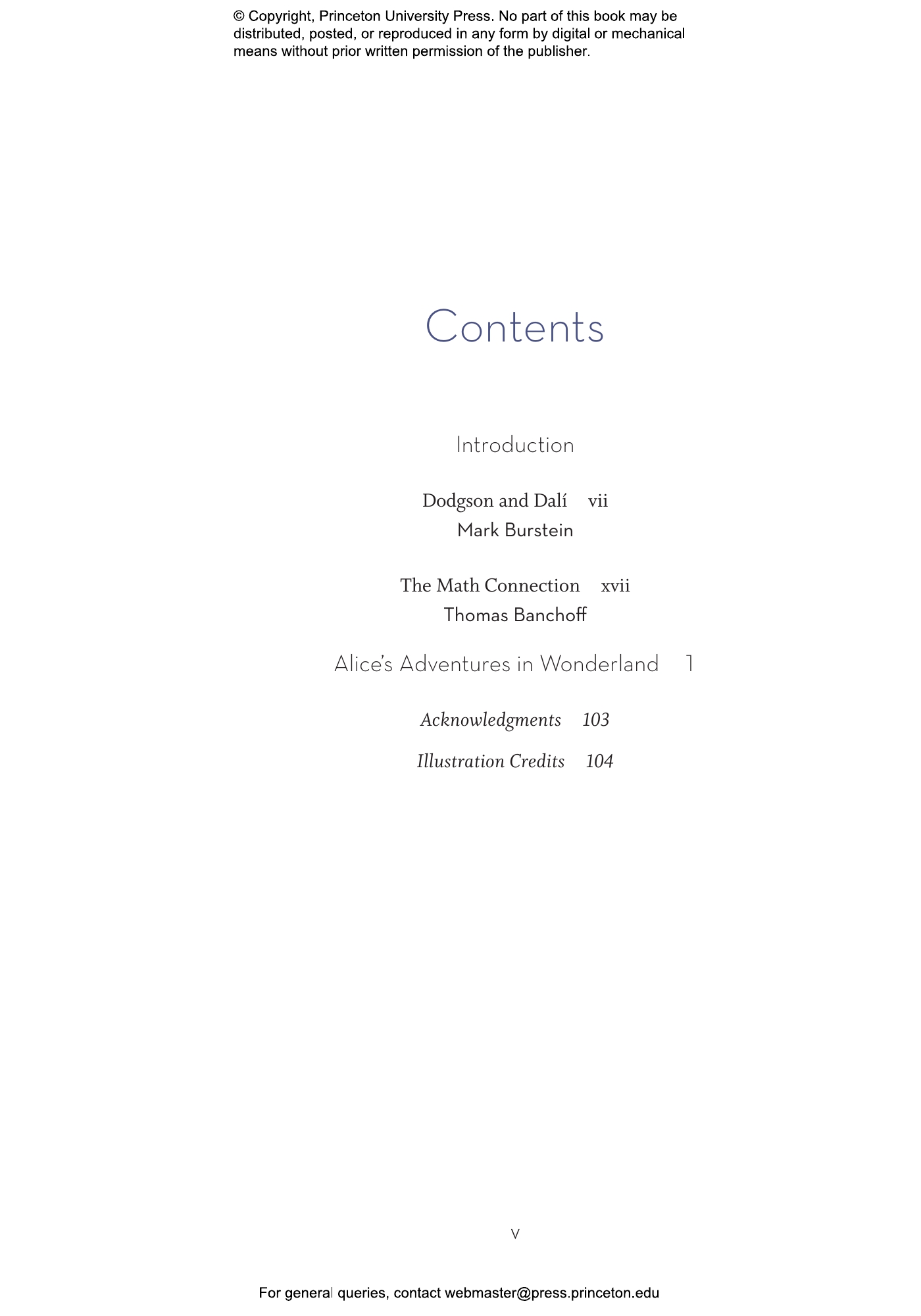 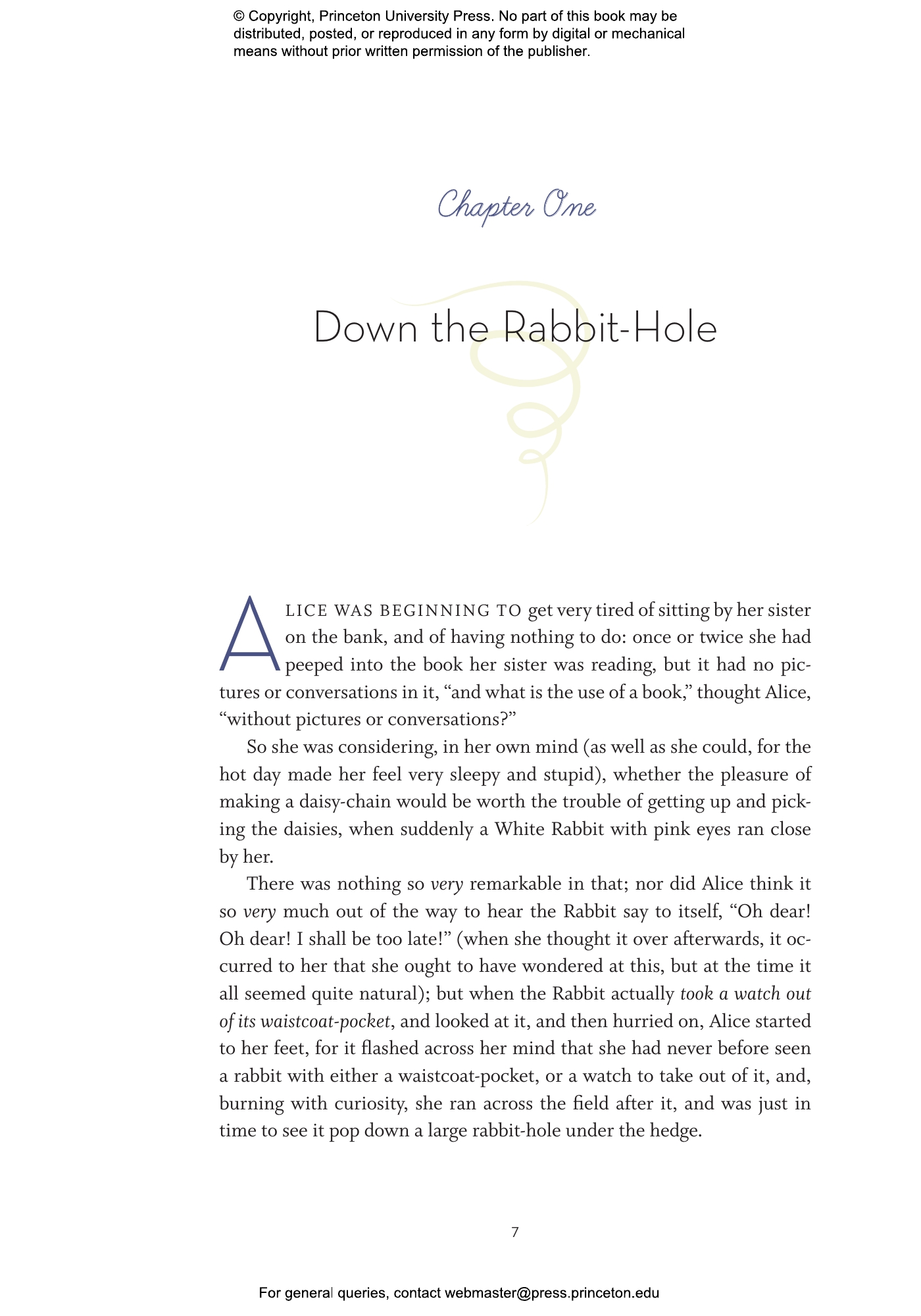 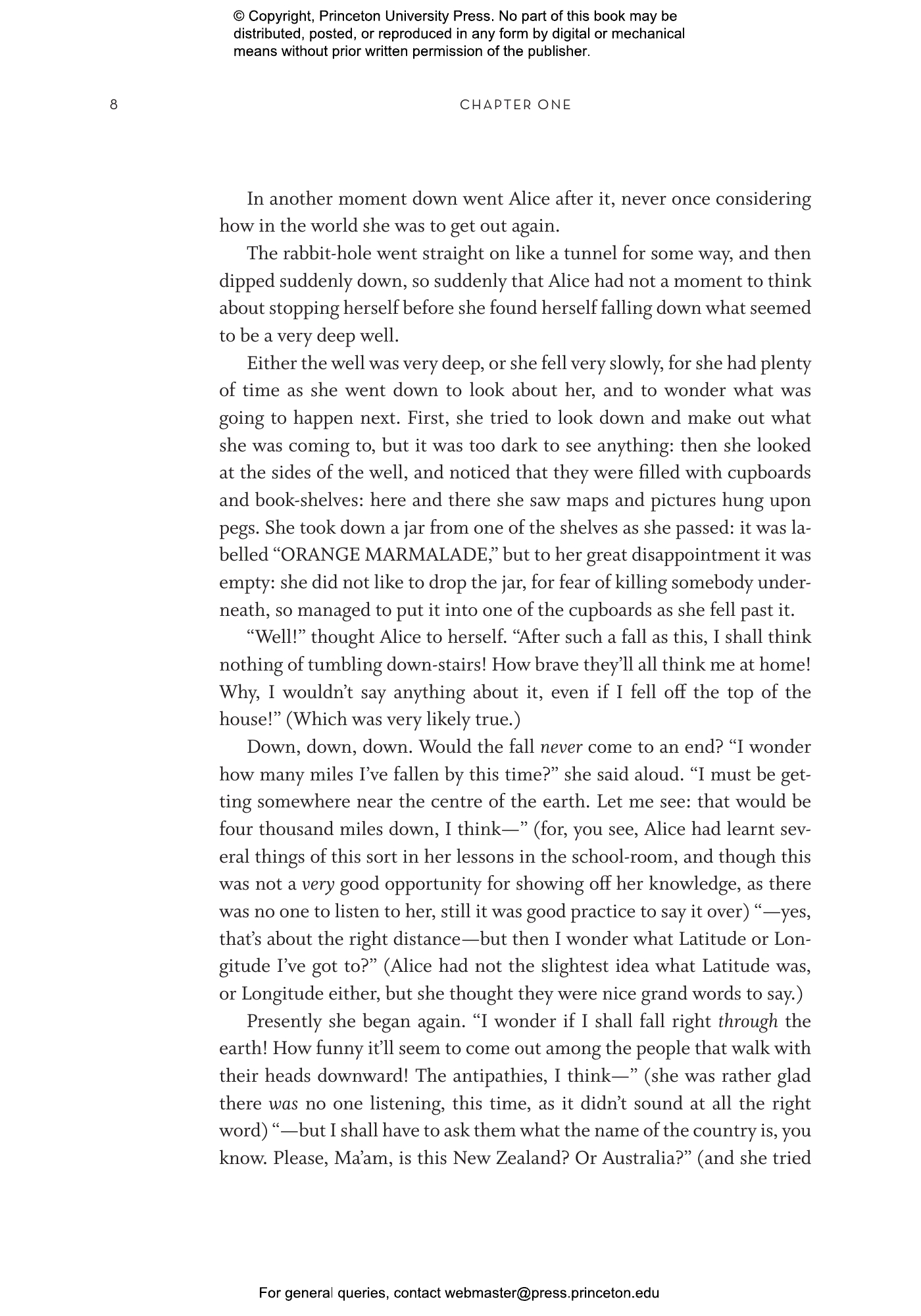 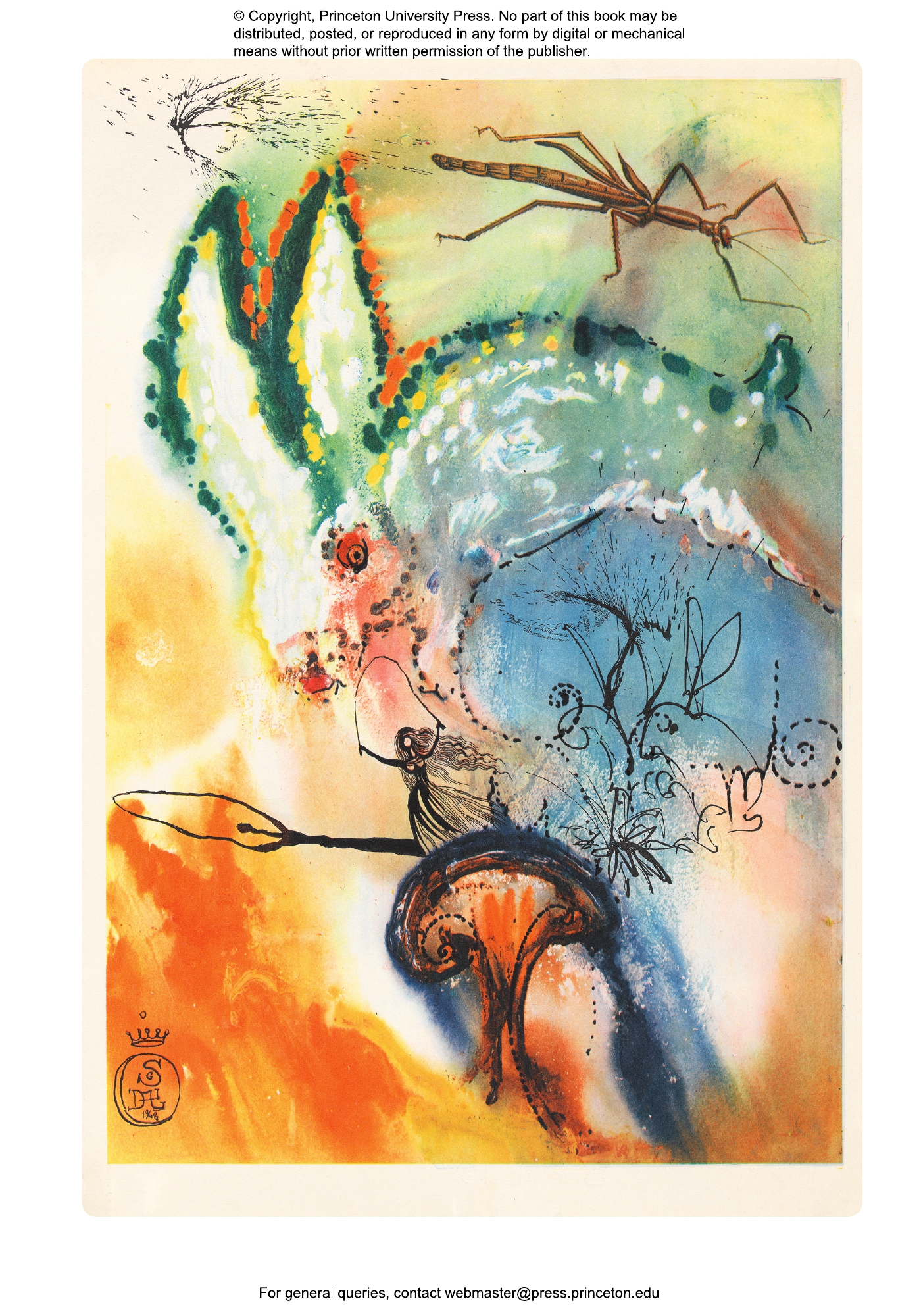 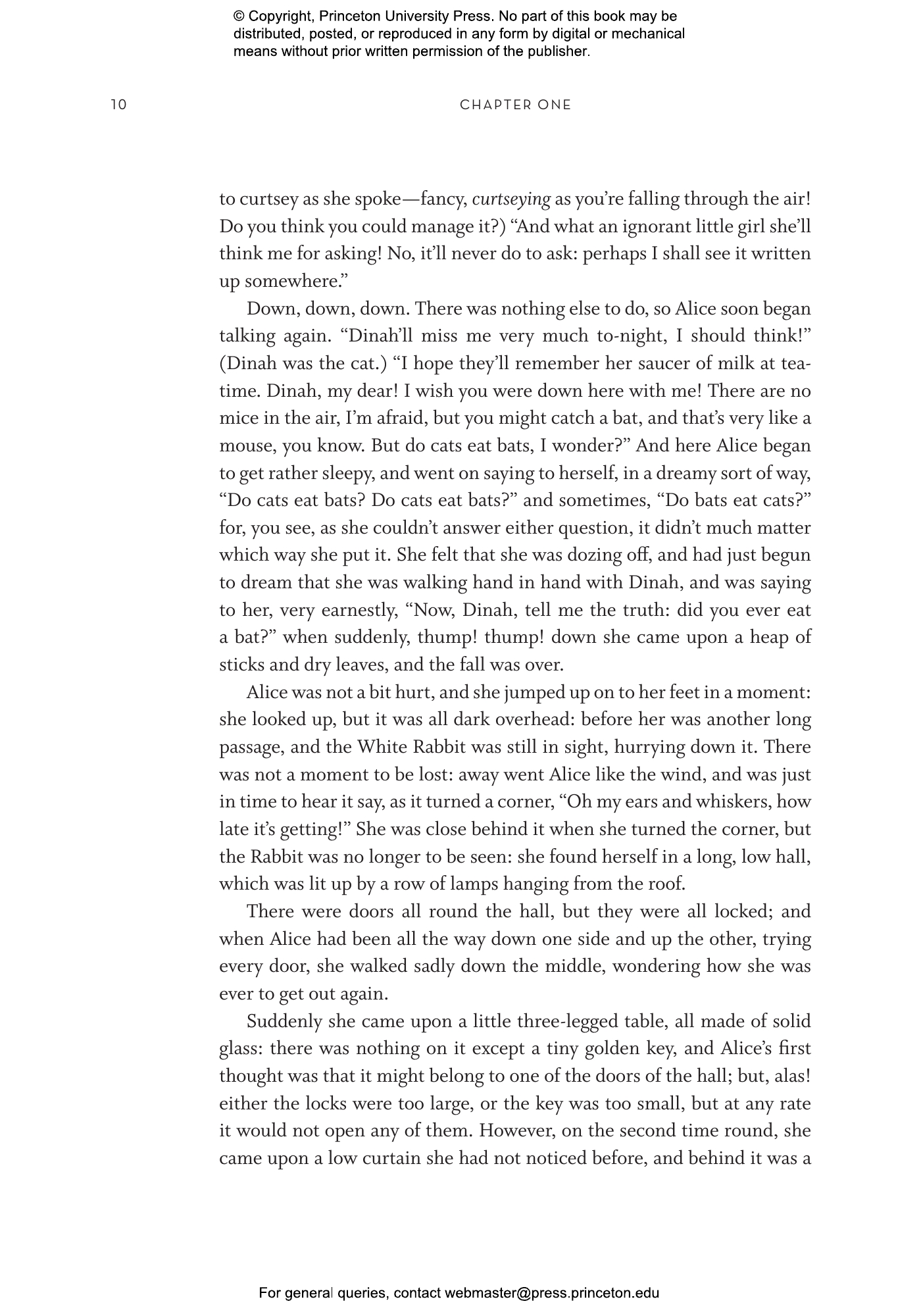 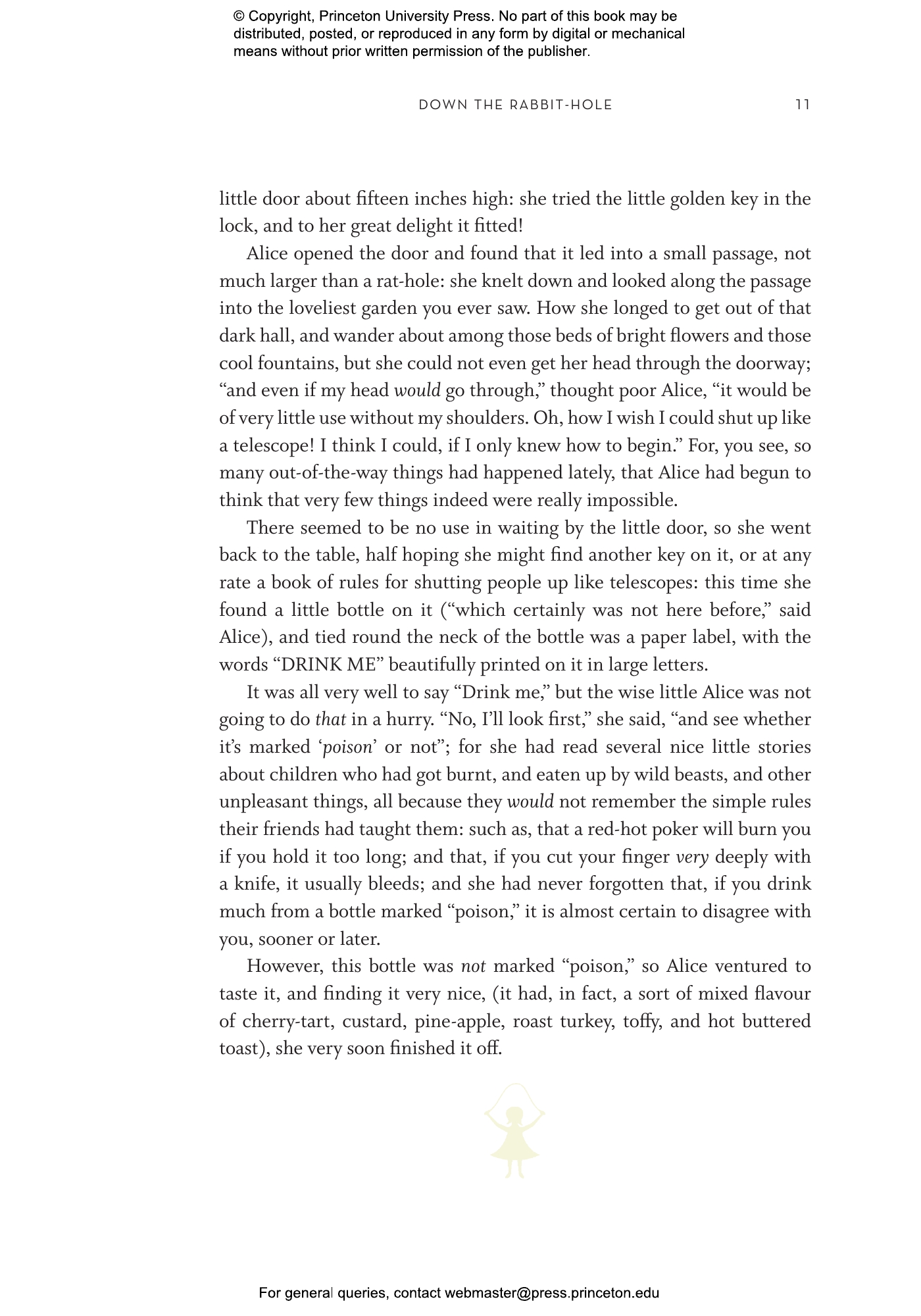 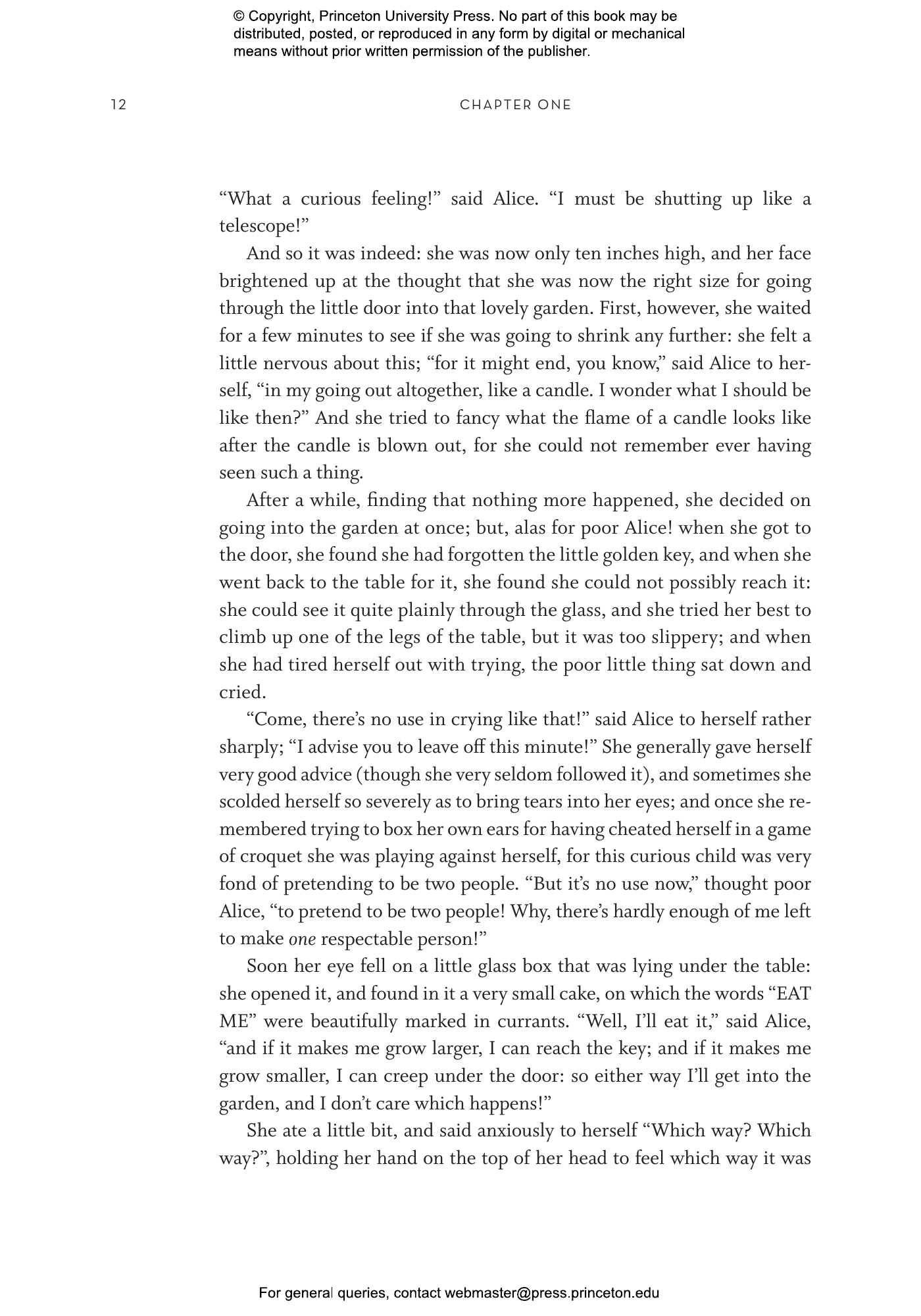 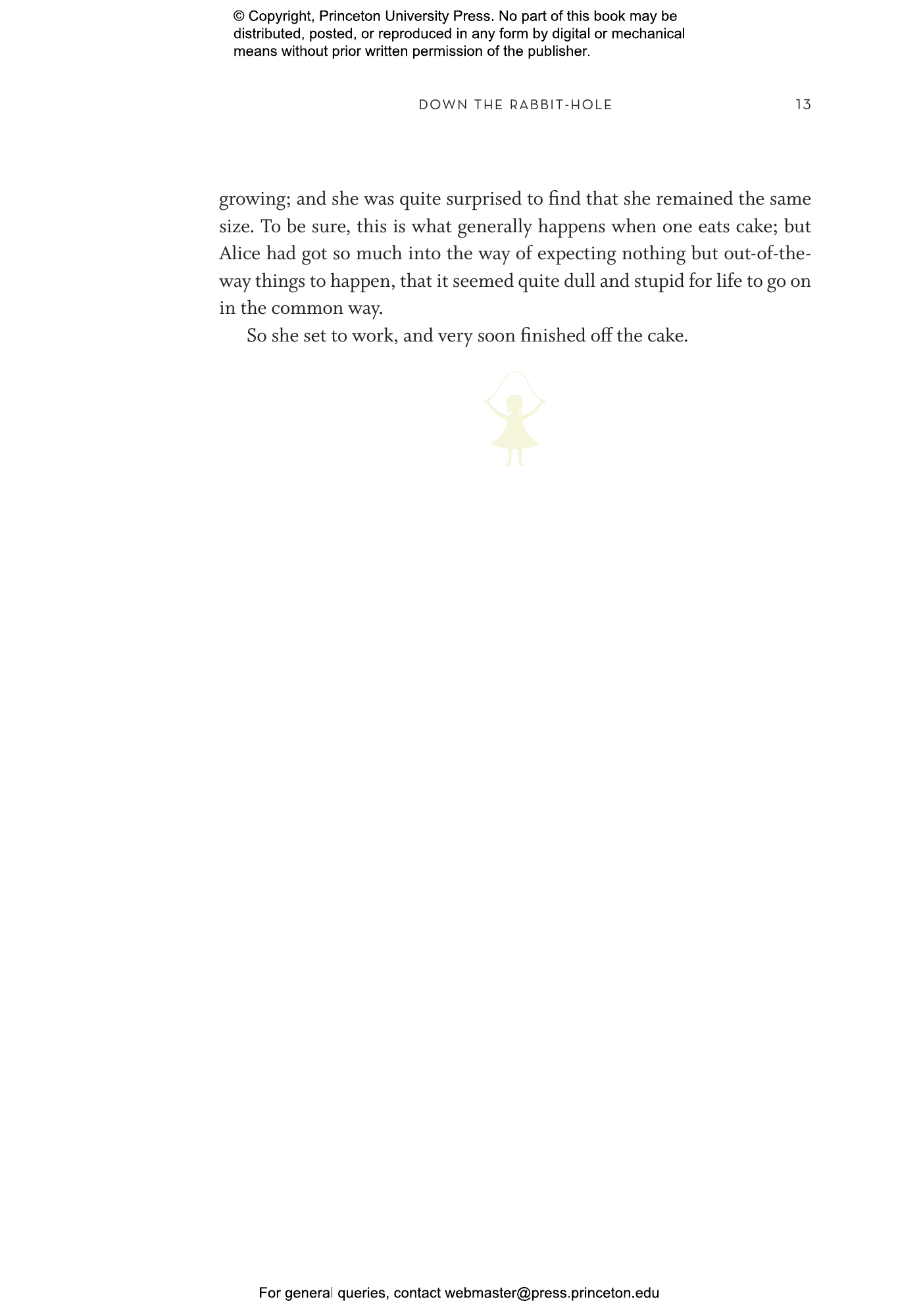 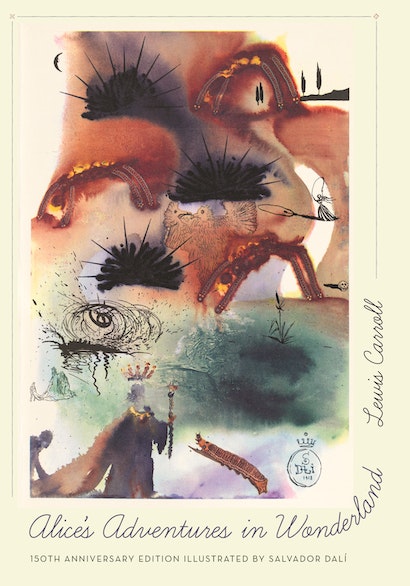 Commemorating the 150th anniversary of one of the most beloved classics of children’s literature, this illustrated edition presents Alice like you’ve never seen her before.

In an informative and wide-ranging introduction, Carroll expert Mark Burstein discusses Dalí’s connections with Carroll, his treatment of the symbolic figure of Alice, and the mathematical nature of Wonderland. In addition, mathematician Thomas Banchoff reflects on the friendship he shared with Dalí and explores the mathematical undercurrents in Dalí’s work.

Lewis Carroll was the pen name of Charles Lutwidge Dodgson (1832–1898), a British writer, mathematician, logician, Anglican deacon, and photographer. His best-known works are Alice's Adventures in Wonderland and its sequel, Through the Looking-Glass. Mark Burstein is president emeritus of the Lewis Carroll Society of North America and the editor of or contributor to fourteen books about Carroll. Thomas Banchoff is professor emeritus of mathematics at Brown University.

"Engaging the text side by side with the artwork yields a myriad of interesting tonal effects in both the words and the pictures. It's an entirely different approach to the notion of illustration. . . . This book succeeds in scratching the itch many admirers of Carroll and Dalí have felt for too long."—Megan Volpert, PopMatters

"[The drawings were] originally printed alongside the rise of 1960s psychedelia, we can return to examine the curious collaboration between one of the most prolific 20th-century dreamers and one of the 19th-century's most influential fantasies."—Allison Meier, Hyperallergic

"The hardcover book as a physical object has much to recommend it. Beautifully designed with high-quality paper, it is nonetheless inexpensive enough that parents shouldn't panic at the prospect of thumbprints and spills if they read or give it to their children. A great gift for children, children-at-heart, and lovers of timeless culture, it will earn a proud place by the bedside, on the bookshelf, or on the coffee table right beside the tiny golden key to the garden of your imagination."—Jon Sobel, Blogcritics.org

"Dali's illustrations have a colourful force of their own. Carroll's Alice anticipated the Surrealist wonderland: dreams and paradoxes, puns and psychoanalysis, distortions of space and time."—Dominic Green, Standpoint

"[This] is the copy of Alice's Adventures you keep after having given all the other celebratory variants away . . . it comes with two very astute and well-illustrated introductions. . . . It is, as the introductions state, as both creators would like to see it—two weird and/or wonderful minds with much in common, harmonizing across the centuries to result in this very handsome modern edition."—John Lloyd, The Bookbag

"The introduction by Burstein . . . and Thomas Banchoff provides a valuable grounding in [Dalí's] interests and obsessions at the time the gouaches were created."—Library Journal

"[A] stunning 150th-anniversary edition of the classic novel Alice's Adventures in Wonderland. . . . Dalí's illustrations afford us a glimpse of Wonderland as he sees it, allowing us to better grasp the implications, tropes and symbols the work is pregnant with."—Wan Lixin, Shanghai Daily

"Older students, especially those studying art and graphics, might well find much to research in this extraordinary collaboration."—Jane Doonan, School Librarian

"For more than half a century, this unusual yet organic cross-pollination of genius remained an almost mythic artifact, reserved for collectors and scholars. To mark the 150th anniversary of the beloved book, Princeton University Press brought back to life the Dalí-illustrated Alice's Adventures in Wonderland. . . . A crowning achievement among the greatest illustrations of the Carroll masterpiece from the century and a half since its inception, featuring new introductions by Mark Burstein, president of the Lewis Carroll Society of North America, and mathematician Thomas Banchoff, who knew and collaborated with Dalí."—Maria Popova, Brain Pickings

"The book itself is a beautiful physical object, and it makes available for the first time to the general public Salvador Dalí's illustrations for the 1969 Random House edition [Maecenas Press, New York]. We hold it in our hands, enjoying its weight and beautiful cover (Salvador Dalí's The lobster's quadrille). We open it at random, and our eyes feel immediately welcomed by the comfortable text size and off-white high-quality paper. We glance through its pages, noticing their pleasant texture, and our curiosity is raised by the attractive colors and shapes of the illustrations. We know, even before we start, that reading Carroll's story in this edition will be a wonderful experience. We sit comfortably, open the book and . . . off we go!"—Capi Corrales-Rodrigáñez, MathSciNet

"Until now, the astounding illustrations drawn by Salvador Dalí for a deluxe limited edition and expensive version of Alice's Adventures in Wonderland were out of reach for most book lovers. This book fulfills the dreams of many who want to have their own copies of these beautiful works, with the addition of an erudite introduction to Carroll and Dalí by Mark Burstein and Thomas Banchoff."—Edward Wakeling, author of Lewis Carroll: The Man and His Circle

"To those of us brought up on John Tenniel's iconic illustrations for Alice's Adventures in Wonderland, it seems unbelievable that anyone else would dare to attempt the task. Yet hundreds have done so, though none is as distinguished and few as imaginative as Salvador Dalí. This attractive 150th anniversary edition, which describes Dalí's mathematical interests and presents his illustrations (previously published only in a rare limited edition), is greatly to be welcomed."—Robin Wilson, author of Lewis Carroll in Numberland

"How appropriate for this volume to appear as part of the celebration of the 150th anniversary of the first publication of Alice's Adventures in Wonderland. Burstein and Banchoff give us insights into the genius of both Carroll and Dalí, and then we have Dalí's illustrations, which are far distant from any suggestion of realism. Altogether, it is a remarkable voyage through Wonderland on a new plane—an enlightening and pleasurable adventure."—Morton N. Cohen, author of Lewis Carroll: A Biography

"All in all a marvelous book printed on thick paper. This anniversary edition will be an irresistible temptation to any bibliophile."—A. Bultheel