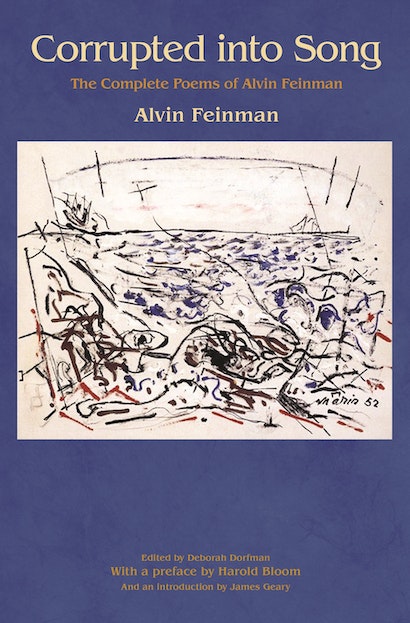 According to Harold Bloom, “The best of Alvin Feinman’s poetry is as good as anything by a twentieth-century American. His work achieves the greatness of the American sublime.” Yet, in part because he published so sparsely, Feinman remained little-read and largely unknown when he died in 2008. This definitive edition of Feinman’s complete work, which includes fifty-seven previously published poems and thirty-nine unpublished poems discovered among his manuscripts, introduces a new generation of readers to the lyrical intensity and philosophical ambition of this major American poet. Harold Bloom, a lifelong friend of Feinman, provides a preface in which he examines Feinman’s work in the context of the strongest poets of his generation—John Ashbery, James Merrill, and A. R. Ammons—while the introduction by James Geary, who studied with Feinman at Bennington College, presents a biographical and critical sketch of this remarkable poet and teacher. Corrupted into Song restores Feinman’s work to its rightful place alongside that of poets like Hart Crane and Wallace Stevens, with whom his poetry and poetics have so much in common.

Alvin Feinman (1929–2008) taught literature at Bennington College from 1969 to 1994. He was the author of Preambles and Other Poems and an expanded edition of that work, Poems (Princeton). He was born in Brooklyn, New York, and educated at Brooklyn College, the University of Chicago, and Yale University. Feinman's wife, Deborah Dorfman (1934–2015), taught literature at Temple University, Wesleyan University, and SUNY Albany. Harold Bloom (1930–2019) was Sterling Professor of the Humanities and English at Yale University. James Geary is deputy curator of the Nieman Foundation for Journalism at Harvard University and the author, most recently, of I Is an Other: The Secret Life of Metaphor and How It Shapes the Way We See the World.

"These poems do have a strong center, which springs from the speaker's intelligence, his measured rhythms and use of rhyme, and his sometimes detached outlook as he examines the world around him. . . . Feinman's work deserves a broader audience."—Elizabeth Lund, Washington Post

"A riveting collection by a poet who deserves to be better known."—Carol Rumens, The Guardian

"Alvin Feinman's poems are perhaps the purest evidence of the extinction of personality T. S. Eliot believed was one of poetry's necessities. As an aspiration, extinction of personality is as dangerously thrilling as being exposed to a siren's song. As an achievement, Feinman's exquisite, visionary poems, tied to the mast of their own making, allow us to behold fierce, unyielding perceptions."—Michael Collier, director of the University of Maryland Creative Writing Program and the Bread Loaf Writers' Conference

"Poetry is making, poesis. And for a time, Alvin Feinman was a maker, a majestic poet who came to embrace his own intolerable limitations, his own dead-end. After long silence, one rejoices in these almost forgotten, rigorous, earthly, purgative poems."—Henri Cole